Last month on the podcast The Three Questions with Andy Richter, comedian Jim Gaffigan said he always thinks he’ll be “metaphorically escorted into a room of luxury” after achieving something special, though he’s learned that doesn’t exist. But if you’re a composer interested in writing for percussion, there’s a room that might provide similar validation, and plenty of new ideas.

I’m talking about a 2,000-square-foot warehouse in Edgerton, Wisconsin, where Sean Kleve, music director of the percussion quartet Clocks in Motion, houses a collection of instruments, some of them rare and built by the group. They call the space their “Instrumentarium,” and composers who collaborate with them can go there to survey their wide and varied options.

One of those visitors has been Andrew Rindfleisch, professor of composition at Cleveland State University. His years-long collaboration with Clocks in Motion continues on Monday, September 23 at 8:00 pm, when the ensemble will visit CSU’s Drinko Recital Hall to premiere his Chroma.

Considering the large collection owned by Clocks in Motion, it might not surprise you to hear unique instruments throughout the program. The Silverman work draws on the steel drum, that beautiful and fun instrument that’s not often heard in the contemporary classical world. Bellor, the resident Clock Shop composer for the ensemble, uses a glass marimba known as the aquarion in Of Maker and Movement, which the group premiered in March. And Rindfleisch’s Chroma makes use of the quarimba — a marimba tuned a quarter tone flat, often played in combination with a standard marimba to allow for a 24-note scale. 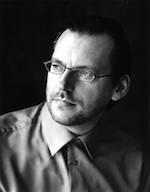 Another feature of Chroma is that Rindfleisch (left) wants a very delicate texture. The Clocks players have been getting creative to make that happen. “We’re constructing some really soft, ethereal mallets,” Sean Kleve said during a telephone interview.

The goal is to just barely activate a sound. An example is using very soft marimba mallets on a vibraphone — as Kleve said, you hear a ringing echo after the strike. “It’s like, where did that sound come from? We’re going to be experimenting a lot with creating a resonance without a definite attack.”

All of that extra problem solving is part of the life of percussionists. In some ways, Kleve loves it. With a new piece, fundamental ideas of sound have to be discovered. “If a composer writes a suspended cymbal note — well, how big is the cymbal? What implement are we using? There’s almost an infinite number of sounds you can produce on a single instrument, and that’s really fun artistically.”

On a practical level, that can all be frustrating. “You look at the violin player who just shows up with their case. For us, we bring a truck or a trailer, and we have this huge facility to house all the instruments and mallets.”

That facility, the “Instrumentarium,” is actually a storefront where the group sometimes performs. The instruments are kept on shelves, and only make up Kleve’s personal collection. The other three members of the group — Megan Arns, Matthew Coley, and Christopher G. Jones — also own a huge warehouse of gear. “My long-term goal for the group is to have everything we need in one space so they can come out here and rehearse, and not have to bring anything with them,” Kleve said.

With so much to carry around, it has to be nice to stay in one place for a few days. Fortunately that will be the case in Cleveland. “We’ll have three, maybe four days of rehearsal with Rindfleisch,” Kleve said. The residency will also have them reading student compositions and recording a music video for Chroma.

“Rindfleisch is going to have a whole camera crew there,” Kleve said. “The video component is going to be the live performance, which is really exciting, and the next morning we’re recording the audio for a CD project.” When it sees the light of day, that album will include Chroma and two other works Rindfleisch has written for Clocks in Motion: Atomic Atomic and Simple Song. And perhaps more. “It’s a long-term percussion recording process that he’s putting together,” Kleve said.

Although the turbulent marriage of F. Scott and Zelda Fitzgerald —  self-caricatures of the Jazz Age — has inspired a number of literary efforts in addition to their own near-autobiographical novels, the subject never seems to have been approached through the lens of opera. Composer Evan Mack and librettist Joshua McGuire have stepped in to fill that void with their one-act The Ghosts of Gatsby, commissioned by Samford University (Montgomery, Alabama), where it premiered in November 2018. END_OF_DOCUMENT_TOKEN_TO_BE_REPLACED

While many American orchestras were just beginning to stir again after the holidays, Franz Welser-Möst and the Clevelanders were busy pulling off one of the most impressive programs in recent memory. A neglected Dvořák symphony, a darkish Mozart piano concerto featuring Yefim Bronfman, and a standout among Janáček’s few orchestral works served up sequential delights on Friday, January 10. END_OF_DOCUMENT_TOKEN_TO_BE_REPLACED