When Michael Francis made his Cleveland Orchestra debut last summer, the British-born conductor brought along a program that featured music by Elgar and Vaughan Williams. When he returns to the Blossom Music Center stage on Sunday, August 5 at 7:00 pm, he will lead the Orchestra in a program featuring the music of Bedřich Smetana, Leoš Janáček, and Antonín Dvořák. Tickets are available online.

“I’m thrilled to be asked back,” Francis said during a telephone conversation from his home in Tampa, Florida. “The Cleveland Orchestra is a truly exceptional orchestra and the Blossom Festival is a real beacon of cultural life in America. To have a chance to do these three pieces that I love is a great honor.”

Francis, who serves as music director of The Florida Orchestra, said that being English, he has a “strong connection” to the music of British composers. “But I’m not Czech. I have no connection in my blood to Czech music, I just love it. I find it so visceral, powerful, romantic, and exciting, and I’m happy to talk through each piece.”

The program will open with Smetana’s Sárka (from Má Vlast) and be followed by Janáček’s Taras Bulba. “In terms of the narrative, I think these two pieces make up the most violent first half of a concert that you could possibly put together,” Francis said. “It’s absolutely vicious.”

The conductor noted that Smetana was the father of the Czech movement. “Smetana was the one who gave the Czech people a musical identity they could feel proud of,” he said. “It’s no coincidence that their National Festival always starts with a performance of Má Vlast on Smetana’s birthday.”

Šárka, a female warrior, is the central figure in the Czech legend of The Maiden’s War. The story has it that Šárka ties herself to a tree and waits to be saved by the princely knight Ctirad, tricking him into believing that she is a captive of the rebelling women. 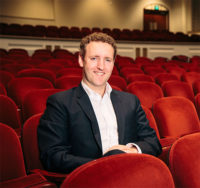 Francis, who began his musical career as a double bassist in the London Symphony Orchestra, recalled the first time he played the work. “It just burst out like a ball of energy. The opening is almost like an Errol Flynn adventure. And there’s that tantalizing moment when she ties herself to a tree and the Knight Ctirad falls in love with her. But when he and his men fall to sleep, the bassoon lets out a great snore and the maidens rush in and murder all the men. It is absolutely brutal, so much so that it almost becomes comical. I think what Smetana captures in the piece is this tremendous appreciation of the physicality of the narrative alongside the sweeping romance.”

Janáček’s Taras Bulba depicts three episodes from Nikolai Gogol’s novel of the same name. The composer dedicated the work, written between 1915 and 1918, to “our army, the armed protector of our nation.” Francis said that the first movement, ‘The Death of Andrei,’ is a “wonderful tragedy.” After falling in love with a Polish noblewoman, the young Cossack is killed by his father, Taras Bulba. “With Janáček you don’t get the sense of linear progression in the music. It’s very episodic — little moments that he ties together. But the romantic love music in the first movement is very touching and very Hollywood. You can see this being set in a theater. But in many ways, you don’t need to see it because the music is so clear.”

The second movement depicts the capture and execution of Ostap, Taras Bulba’s oldest son. “The torture sequence is so horrible,” Francis said. “Ostap is cracked and broken, his bones dislocated and falling off him. In the story, he didn’t cry or make a noise except when he called out his father’s name. And Taras Bulba was watching it and called out his son’s name back to him. The way that Janáček brings in the Mazurka with the Poles wildly dancing almost becomes grotesquely comical — until the very end, when you just feel this musical depiction of pain. The other piece that reminds me of this is Barber’s Medea’s Dance of Vengeance.”

The conductor said the final movement, ‘The Prophecy and Death of Taras Bulba,’ is one of the great endings of all time. “After he is captured and tied to a tree, there’s this immolation sequence where you feel the heat. He calls out that the Tsar will rule again, Russia will rise, and at the end there’s a great, powerful Russian chorale with the bells and the organ. It’s a magnificent concept — the idea that the spirit is greater than the individual. We can read that idea in Gogol’s story — that no fire or torture could quell or quench the spirit of the Russian people. It’s one thing to read it but when you hear the music creating it, it just feels so thrilling.”

Unlike the works of Smetana and Janáček, Dvořák’s Symphony No. 7 is not clearly tied to a narrative, although the composer wrote that he was inspired by a train arriving from Pest into Prague Station. He also described the time during which it was written as his sad years.

“I think it’s one of the most perfect examples of what a Romantic symphony should be,” Francis said, “the way that the first movement builds up to an epic climax with the accelerando. The coda is gloriously enigmatic — you feel the ideas just disintegrate into nothing.”

Regarding the slow movement? “It does feel like he’s dealing with the most profound emotions, and the fact that we don’t fully know the narrative makes it even better,” Francis said. “At the end of the movement you get the sense of calm, which is very touching. He’s using the music cathartically to find peace. I’m always inspired by that.”

When asked about the third movement, Francis said, “He’s in his wheelhouse. That glorious sense for writing great Czech dances — there’s something very powerful and driven, almost diabolical. It’s tremendously exciting and I can’t wait to hear it in The Cleveland Orchestra’s hands. They’re going to play the socks off it. And in the Finale, he’s set up the darkness so you’re expecting a positive resolution. We do find resolution — it ends in a major key, but to me it doesn’t feel like it. It’s like Shostakovich 5: it ends in major, but really, is it a happy ending?” 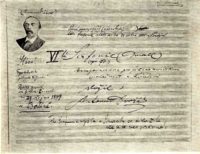 The conductor pointed out that on the front page of the score Dvořák wrote, ‘Love, God, and my Fatherland.’ “He wanted the piece to be like a Beethoven symphony and unite humanity and give you a bigger perspective. And anyone who listens to it can find something to view in their own life — Per ardua ad astra — from struggles to the stars. People ask me if I miss playing the double bass, and I say that I miss the camaraderie, but there are certain pieces that I absolutely miss playing, and this is one of them. There’s such a joy of being involved in a brilliantly-constructed symphony — no single note is wasted.”

Turning our conversation to his work in Tampa, Francis said he is proud to be associated with an orchestra that is vibrant and growing. “During the previous season we sold 100,000 tickets for the first time, and in the one that just ended we sold 125,000. But the statistic that gives me the most pleasure is that we played to over 80,000 people each season for free.”

Francis firmly believes in the power of music to change people — to help them understand themselves and the lives of others around them. “We need to educate our young people through the discipline of playing music, as well as learning to listen together as a community, to tackle the big subjects. People don’t often discuss these things, but we discuss them openly in The Florida Orchestra. Our pre-concert talks have grown from around 50 to nearly 1,000 people. These have kind of become must-attend events. That’s something I feel very proud about.”

The conductor feels that if you truly believe that music helps us understand ourselves, then it has to be available to everybody. “I talk about how our boundaries are not limited to the size of our concert hall, but by the size of our community,” he said. “So we need to take the music to those who are in the most need — those in hospitals and hospices, those who do not have the financial means to come to concerts, and those who may not have known about us beforehand. How we approach community engagement is something that is constantly evolving in the understanding of our community. Many orchestras do this exceptionally well, but I believe that we are at the forefront of showing how an orchestra can not just exist and survive but really thrive in the 21st century. It’s not just to create a bigger audience, ultimately it’s to do the right things.”

Jackson began the program with a recitation of Langston Hughes’ poem “Helen Keller” — the first of five poems by Hughes that served as interludes between each piece on the first half. END_OF_DOCUMENT_TOKEN_TO_BE_REPLACED

Pianos with pins and tape on strings, a bass drum and tam tam, crotales, Almglocken, and vibes. Microphones were hooked up all around the instruments. The feed was sent to speakers around the room. Lighting designer Nicholas Houfek hung incandescent globes over the arrangement of instruments from thin black wires stretching across the beams. END_OF_DOCUMENT_TOKEN_TO_BE_REPLACED

From the podium, Elim Chan set an ambitious tone for the evening. The rising star conductor, here in her Cleveland Orchestra debut, has a commanding style, and every twist and turn in Saturday’s performance tracked closely with her baton. END_OF_DOCUMENT_TOKEN_TO_BE_REPLACED