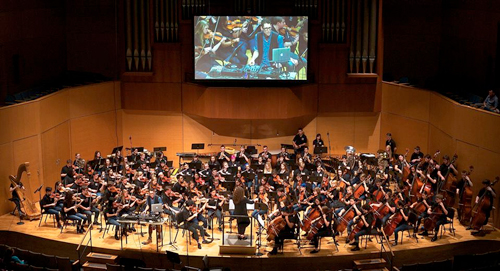 Some of the pop culture-inspired works under composer Michael Daugherty’s belt include Dead Elvis for bassoon and ensemble and Le Tombeau de Liberace for piano and orchestra, as well as countless others. On Saturday CYO took on his Metropolis Symphony, an epic five-movement work that recounts the mythology of the comic-book hero Superman. Throughout the 40-minute piece, Daugherty brilliantly interweaves scatterings of jazz, rock, funk, and avant-garde with the symphonic. Each movement can be performed on its own, but Saturday’s performance marked the Cleveland premiere of the entire symphony, as well its first performance by a youth orchestra.

Conducting with a clear beat, Grossman led the young musicians in a first-rate performance of the demanding work. Concertmaster Alex Ikezawa was superb during the virtuosic solos in “Lex” (Lex Luther). Playing with a clear and focused sound, Ikezawa tossed off the craggy technical passages with aplomb. “Krypton” — named for the exploding planet from which the infant Superman escapes — erupted in sonic glory with expert assistance from the percussion section. Flutists Sonia Richman and Carlee Kime played their dueling solos with luminous flair as they brought the mischievous imp in “MXYZPTLK” to life. 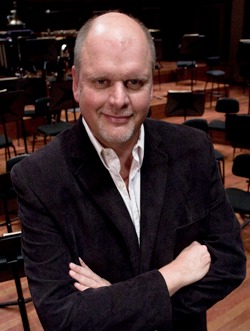 “Oh Lois!,” marked “faster than a speeding bullet” and named for Lois Lane, is a mini concerto for orchestra, and Grossman drew an exhilarating performance from the ensemble. Illustrating Superman’s fatal encounter with Doomsday, “Red Cape Tango” brings Metropolis Symphony to a solemn conclusion. Horn players Gretchen Bernard, Sami Berman, and Jocelyn Ting brought an appropriate melancholy to their off- and on-stage solos, and bassoonist Aviva Klein mournfully introduced the medieval Latin death chant, Dies irae. The large audience showed their appreciation with a well-deserved ovation. The composer, who was present at the concert, gestured delightedly to the orchestra as he applauded the performance.

The program began with an energetic performance of Bernstein’s “Mambo” from West Side Story, complete with dancing. Then the stage was quickly reset for the world premiere of Concerto for Turntable and Orchestra by Doc Harrill, aka DeeJay Doc. Prior to the performance, Harrill explained that the concerto consists of two parts: “Suite for Ma Dukes,” which Miguel Atwood-Ferguson based on a hip-hop beat created by producer J Dilla, and “Trust Belt City,” which Harrill originally wrote as a hip-hop song and later adapted for orchestra. 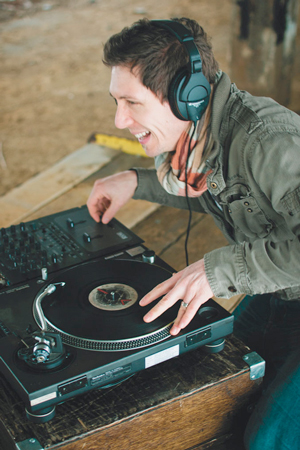 During an interview with ClevelandClassical.com, Harrill said, “The song was birthed by my experiences of living in the Glenville neighborhood and figuring out how to work with neighbors to create a healthy community.” He reminded the audience that it takes a lot of hard work to push through stereotypes in order to begin developing trusting relationships — and that it is important for cities like Cleveland to make the transition from a “rust belt city” to a “trust belt city.”

Colorful orchestral arrangements by Stefan Podell in “Suite for Ma Dukes” and Kevin Krumenauer in “Trust Belt City” provided rhythmic groundwork for DeeJay Doc to work his magic. Using his own creations as well as prerecorded samplings that he made with various orchestra members, DeeJay Doc permeated his performance with vocals, scratching, and other effects that astutely complemented the orchestral tapestry.

The highlight came when members of the orchestra stepped forward and improvised around rhythmic and semi-melodic riffs with the soloist. Overall the performance was surprisingly fluid, though some miscommunication made it sound at times like a work in progress. That said, there is great merit to the concept — an idea that has also been explored by Gabriel Prokofiev, the grandson of Sergei, in his 2006 concerto for turntables and orchestra. DeeJay Doc is a resourceful musician who clearly has a good time performing. Hopefully Saturday’s concert will not be the last collaboration between CYO and the turntable artist. It will be fun to see what the future holds.

END_OF_DOCUMENT_TOKEN_TO_BE_REPLACED

Rodgers & Hammerstein’s Cinderella was originally produced for television in 1957 — seven years after the animated Disney film was released — and starred Julie Andrews. According to the Rodgers & Hammerstein website, it was viewed by over 100 million people. END_OF_DOCUMENT_TOKEN_TO_BE_REPLACED

The story line has its origin in an 1855 play and an 1842 farce that Thornton Wilder mined for his 1938 play The Merchant of Yonkers. When that turned out to be a flop, in 1954 Wilder made the crucial decision to re-center the show around the character of the legendary marriage broker Dolly Gallagher Levi and renamed it The Matchmaker. END_OF_DOCUMENT_TOKEN_TO_BE_REPLACED

The Dodero Center for the Performing Arts at the Gilmore Academy in Gates Mills is one feature of an impressive campus. The auditorium is shallow, the stage is deep, and the ensemble played without a shell. Throughout the program, the sound, especially in instruments’ lower registers, tended to disappear. END_OF_DOCUMENT_TOKEN_TO_BE_REPLACED