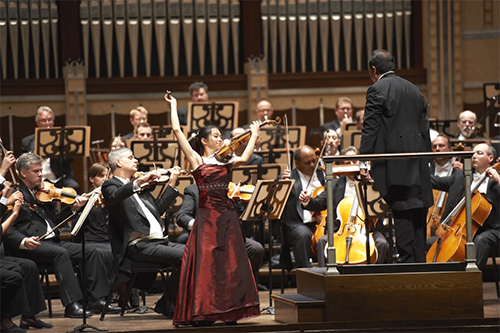 The competition began on August 11 with a field of twenty-four highly qualified contestants aged between 13 and 18. By August 19, that group had been distilled down to a trio of supremely gifted young women. We heard them for the first time playing their concertos with piano on Tuesday and were impressed by the technical prowess of all three contestants. We were looking forward to revisiting those pieces in all their orchestral splendor at Severance Hall.

After remarks and introductions from Oberlin Conservatory Dean David H. Stull, Ms. Switala, who hails from Grapevine, Texas, took the stage with Maestro Ling for Sergei Prokofiev’s Violin Concerto No. 2. Ms. Switala has appeared as soloist with the Fort Worth Symphony and Chicago’s Ars Viva Symphony. As the junior winner of the 2011 Sphinx Competition, she can look forward to future engagements with the New World Symphony, Buffalo Philharmonic, Ann Arbor Symphony and other U.S. ensembles.

Standing in front of The Cleveland Orchestra must be a heady experience at any age, but Ms. Switala was the picture of confidence and composure on stage. She brought an assured technique to the Prokofiev and a general understanding of its emotional content. Her sound was always pleasant to listen to if not always big and assertive enough to stand up to Prokofiev’s colorful orchestration, but the whole piece was spaciously laid out and her lyrical phrases had shape and direction. She kept in close contact with Jahja Ling throughout the concerto.

Sirena Huang brought significant experience as soloist with orchestras to her Mendelssohn concerto on Friday night. She made her debut with the National Taiwan Symphony at the age of nine, and has played with more than 35 ensembles since. Winner of the 2009 Tchaikovsky Competition for Young Musicians and the 2010 Aspen Violin Concerto Competition, Ms. Huang currently studies at Juilliard.

A very physical player who sways constantly while playing and sometimes holds the scroll end of her violin high in the air à la Joshua Bell, Ms. Huang is a hypnotic presence onstage. She knew the Mendelssohn thoroughly and found special moments to enter into direct conversations with her fellow musicians (as in the bridge to the third movement, when she turned to the first violins for an intimate chat). Her tempos may have been a bit brisk in the outer movements (too quick for comfort for the winds at the beginning of the third), but her concept and execution were long on musical values and the idea of cooperating with colleagues. She smiled while she played.

After intermission, Laura Park ended the evening with the Sibelius concerto. A veteran of many competitions, Ms. Park also has significant solo experience with orchestras in Romania and the U.S. Like Ms. Switala, she studies at the Academy of the Music Institute of Chicago.

Ms. Park brought abundant technique and a big, assertive tone to the Sibelius which allowed her to be heard clearly above the orchestra. Her stylistic concept for the piece was far from Scandinavian in scale and emotional temperature: opulent, brash and loud where it deserved to be lean, understated and full of nuance. Ms. Park’s playing was vivid and exciting, but her intonation was a cause for concern throughout the concerto.

The audience was extremely supportive of all three performers, but gave Ms. Huang an instantaneous ovation (she already had won the audience prize on Wednesday evening at the conclusion of the recital round). A special round of applause was due for Jahja Ling and The Cleveland Orchestra, who dusted off three concertos on one day’s notice in the middle of rehearsals for the Joffrey Ballet performances at Blossom that weekend. They were splendid collaborators with Ms. Switala, Ms. Huang and Ms. Park, and getting to play with them on the Severance Hall stage was a prize all its own.

And speaking of prizes, all three finalists would come away with a four-year scholarship to The Oberlin Conservatory of Music, pending admission, as well as cash prizes of $10,000, $6,000 and $3,000 to the first, second and third place winners, to be announced by the judges after tonight’s performance. The top winner can also look forward to engagements with orchestras in Beijing and Shanghai. All of those prizes are thanks to Thomas (Oberlin ’78) and Evon Cooper of Boston, who have graciously supported the important new violin and piano competitions at Oberlin. The pianists will be back for their turn in 2012.

END_OF_DOCUMENT_TOKEN_TO_BE_REPLACED

Then, you heard all the qualities that make for a stunning soloist. Winner of the 2013 Cleveland International Piano Competition, Khristenko was back in town this month for a recital in Piano Cleveland’s summer series, Piano Days @CLE. And he couldn’t help but revel in the spotlight a little, even as he settled into a more collaborative role at the keyboard for his program, “Stanislav and Friends.” END_OF_DOCUMENT_TOKEN_TO_BE_REPLACED