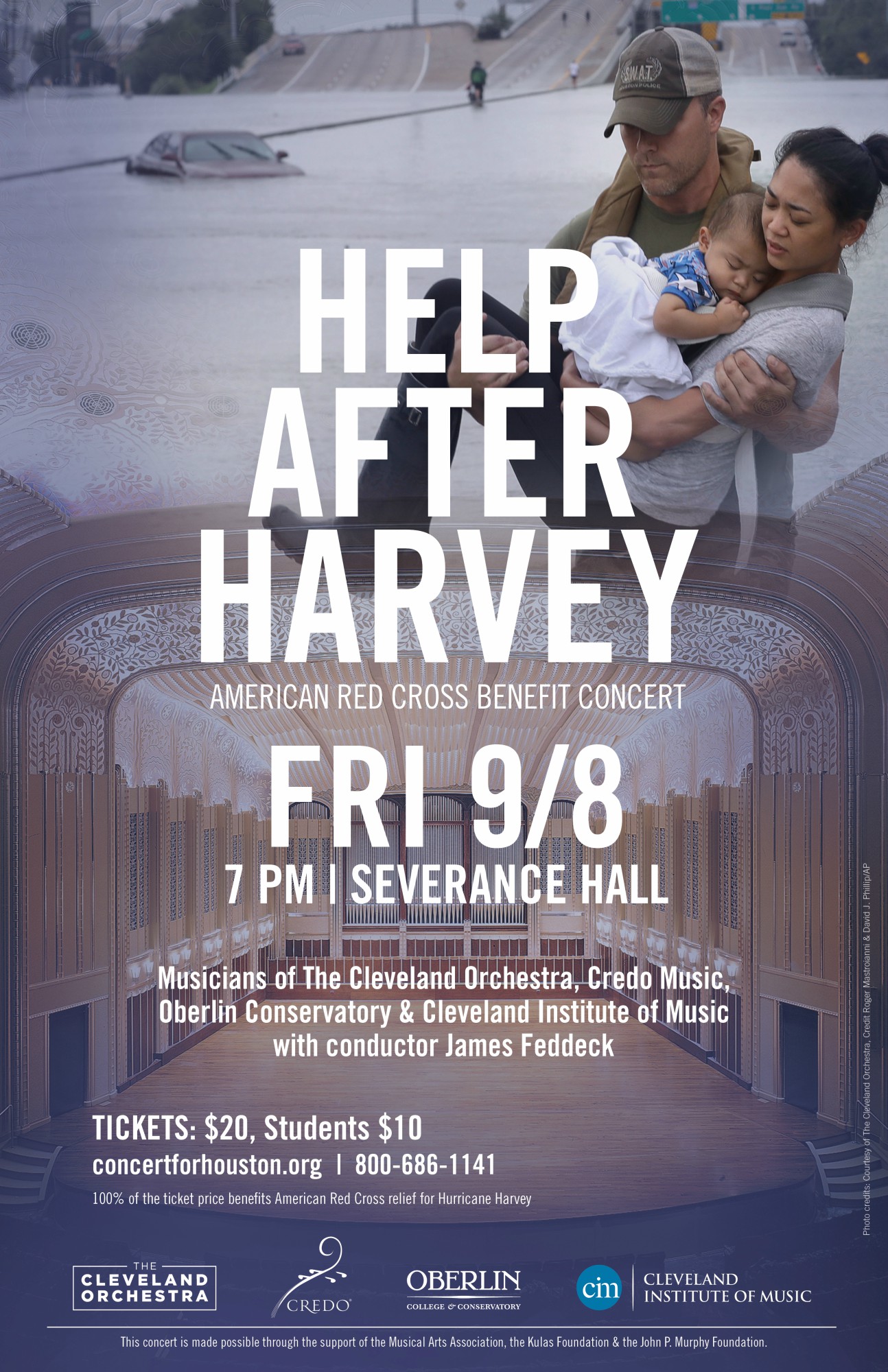 Members of The Cleveland Orchestra will join Credo Music, as well as students from the Cleveland Institute of Music and the Oberlin Conservatory for “Help After Harvey: an American Red Cross Benefit Concert” on Friday, September 8 at 7:00 pm in Severance Hall. Former Cleveland Orchestra Assistant Conductor and Oberlin graduate James Feddeck will conduct.

All seats are $20 ($10 for students), and all proceeds will benefit the American Red Cross for disaster relief services related to Hurricane Harvey. Reserve seats online or call the Severance Hall Box Office at 216.231.1111.

Executive Director Henry Peyrebrune said that the idea of a benefit concert originated in a Credo staff meeting a week ago. “We thought we should do something for the people of Houston. What if we organized a concert?”

Peyrebrune, who is also a member of The Cleveland Orchestra’s bass section, said that his Orchestra colleagues are very generous when it comes to this sort of thing, but many of them might be out of town. “Let’s ask and see who’s available, and maybe we can do it as a partnership with CIM and Oberlin,” he said.

Peyrebrune called CIM president Paul Hogle, while Peter Slowik, Credo’s artistic director and professor of viola at Oberlin, got in touch with Oberlin Conservatory Dean Andrea Kalyn. “Both of them were all-in right from the start,” Peyrebrune said, “and The Cleveland Orchestra was tremendously supportive when we talked to them. It’s heartening that even when things are so divisive, everyone immediately comes together when faced with a true crisis.”

When it came to choosing a conductor, the organizers got lucky in terms of scheduling. “James Feddeck was an early idea. He’s the perfect guy,” Peyrebrune said. “He’s had close associations with all of the institutions, and he actually lives in Oberlin — although he’s rarely there because his career is taking off and he’s conducting all around the world. In fact, he just came back from Europe last night.”

Friday’s concert will field an orchestra of about 85 musicians, almost equally divided among members of The Cleveland Orchestra, students from CIM and Oberlin, and Credo alumni and faculty who are represented in each of those groups.

“We’ve got a great program that seems both fitting to the circumstances and uplifting,” Peyrebrune said. “I do hope that we can fill Severance Hall and that the folks who come — as well as those who can’t make it — will do their best to help the Red Cross as they cope with the immediate aftermath of this disaster.” In addition to purchasing concert tickets, supporters can make donations directly to the Red Cross here.

“We have several colleagues in The Cleveland Orchestra who are former members of the Houston Symphony or the Houston Grand Opera Orchestra, and many Rice graduates as well,” Peyrebrune said, noting that many of them still have personal connections in Houston. “All our friends are safe as far as we know, but some are facing real challenges with flooding. I couldn’t comprehend what it would be like living in Houston and having that level of damage.”

Le mariage aux lanternes, the evening’s curtain-raiser, is about Guillot (Bradley Boatright) and Denise (Genevieve Dilan), a couple working on a farm, who are in love with each other, though the clueless Guillot can’t acknowledge it. With the help of his Uncle Matthias (David Burgher), who sends them letters saying that when the Angelus rings, they’ll find what they are looking for beneath a big tree, they eventually find — each other. Meanwhile, two widows, Franchette (Isabel Merat) and Catherine (Kylie Buckham), are also vying for Guillot’s affection (or, more cynically, plotting to acquire his property). END_OF_DOCUMENT_TOKEN_TO_BE_REPLACED