Fresh air was blowing into Friday evening’s chamber music concert by Credo faculty, even if the Oberlin Conservatory’s Clonick Hall — being the recording studio that it is — has no windows to open. Departing from the usual concert format, where pieces are played in some kind of curated sequence from beginning to end, concert designers Lee Joiner and Steuart Pincombe took works by Henry Purcell, John Dowland, Benjamin Britten, and Ralph Vaughan Williams. and rearranged their movements into a kind of musical crazy-quilt.

Violinists Michael Davis, Lee Joiner and Kangwon Kim, violists Matthew Michelic, Michael Sabatka and Kathy Steely, and cellists Steuart Pincombe and Anne Williams, were deployed in an oval in the center of the space with a grand piano at one end and a continuo organ at the other (both played by James Howsmon). The players were surrounded on two sides by the large audience, mostly comprised of Credo students who are in residence this month at Oberlin.

Dowland was the Alpha and Omega in this program. His lute songs “If my complaints could passions move” and “Where sinne sore wounding” began and ended the hour-long concert, which bore the title, “Lachrymae.” In between, various combinations of players performed Dowland’s “Flow my tears,” Britten’s Lachrymae (Reflections on a song of Dowland) and the first movement of his second string quartet, Vaughan Williams’s Phantasy Quintet, and Purcell’s Sonata in g, No. 5 (Ten Sonatas in Four parts) in what seemed like a random order.

Pincombe suggested that the whole experience would lead listeners to contemplate what made English music sound English. He also noted that a whole minute of silence would mark the center point of the program, to be followed by Purcell’s Fantasia Upon One Note. That piece that would initiate what he called a “Christocentric line” leading upward to the end of the concert. And he requested that there be no applause during the performance. 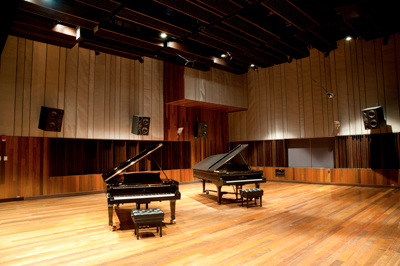 If that approach to programming sounds a bit strange, indeed it was. More of a meditative exercise than a concert, the progression of movements (Dowland to Britten (Lachrymae) to Vaughan Williams, to Purcell, to Britten (Quartet) etc.) suggested the possibility of discerning mystical relationships between them — but those connections proved elusive. What worked least well was the fragmentizing of Britten’s Lachrymae. As he did later in his Nocturnal, Britten had already taken Dowland’s songs apart in his own way, atomizing their musical content in a set of variations before finally presenting the theme whole and intact at the end.

Whatever you thought about the surgical procedures, the performances by the Credo faculty players were tight, assured and masterful. The close juxtaposition of different musical styles could have led to dicey transitions, but the performers dug right into each new movement as though the order of things really did make sense. Some highlights included the rarely-performed Vaughan Williams quintet, and the collision between Britten’s Lachrymae and Purcell’s pieces, so different yet so similar in their acerbic details, though separated by centuries.

Alas for that central minute of silence! It was interrupted by some latecomers who shuffled in looking for seats and were probably puzzled to find performers and audience engaged in some serious navel-gazing. Then a dropped cell phone added a new category of tech distraction to the modern concert experience.