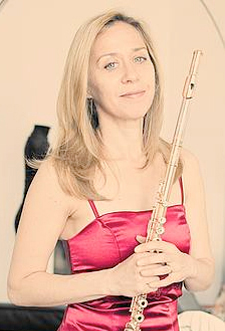 What happens when the “Heifetz of the flute” (Gramophone) and a sensational pianist “at his peak” (International Record Review) converge to play music together? On February 9th in Akron’s E. J. Thomas Hall, Tuesday Musical will present a “Valentine’s Day prelude” recital given by the husband-and-wife duo of flutist Marina Piccinini and pianist Andreas Haefliger. Prepare for more than just sparks to fly — this recital should inflame even the most frozen of hearts.

Ardent? Yes, but this duo is more than just a romantic married couple who perform together –– they function as a high-precision team. “Andreas Haefliger is just an amazing soloist,” Piccinini said during a recent telephone conversation. “When you have a partner like him to do a recital tour, you’re very careful to choose works that are incredible chamber pieces for both instruments.”

The program for the Tuesday Musical recital and for the duo’s subsequent recitals across North America, including a concert on the “Virtuoso Series” at The Kennedy Center, features Sergei Prokofiev’s Sonata in D, Marc-André Dalbavie’s Nocturne, César Franck’s Sonata in A, and the late Pierre Boulez’s Sonatine. “The Prokofiev and the Franck are enormous sonatas. Boulez’s Sonatine is an amazing piece, and the Dalbavie is a short piece that was written for us. Dalbavie was a student of Boulez, so there’s a connection there. The program is really based on repertoire that is fantastic and is absolutely on the same interest level and involvement for both instruments.”

Fittingly for a Valentine’s Day prelude, Piccinini and Haefliger first met through music as students at the Juilliard School. “He was playing the Brahms d-minor concerto as soloist with the Juilliard Orchestra, and I was principal flute. When I finally met him, I felt I already had because I heard him play. It’s difficult to separate the musician and the individual –– which did I fall in love with first? I think it was both.” Returning to the present, Piccinini said, “We’ve been working together for such a long time, but we don’t often get to tour together because we’re both busy. So when we do, it’s like an extra perk.” 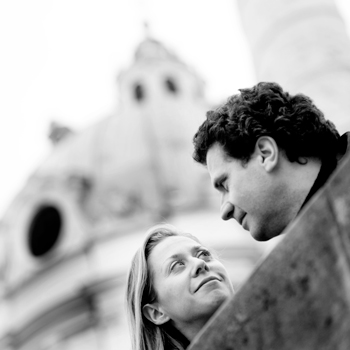 Similar to any lasting relationship or marriage, a great duo consists of phenomenal soloists who value each other’s talent to produce an even greater music than they can create alone. Clearly Piccinini and Haefliger hold each other in high esteem. In addition to this recital tour, the duo has recorded two albums dating from 1995 and 2006. Of their musical life together, Piccinini said, “We both put an incredible amount of attention into our work.”

Sparks will surely fly in Akron’s E. J. Thomas Hall on Tuesday evening, but come see if the husband-and-wife team of Piccinini and Haefliger can make even Cupid swoon.

The cimbalom was the feature of the show, an instrument capable of taking on many personas. Its performer, Chester Englander, has shaped his career around the instrument, and has inspired composers to write more repertoire for it, some of which was presented on the program. END_OF_DOCUMENT_TOKEN_TO_BE_REPLACED

You wouldn’t expect that acoustic from a glance at the nave, which is wide and long, but not especially lofty. But when I guest conducted a local amateur choir and professional orchestra in Beethoven’s Mass in C there a few years back, during the first rehearsal we released the final chord of the “Gloria” and listened in astonishment for the next several seconds. The sound continued to roll down the space like the big wave that surfers dream about. END_OF_DOCUMENT_TOKEN_TO_BE_REPLACED