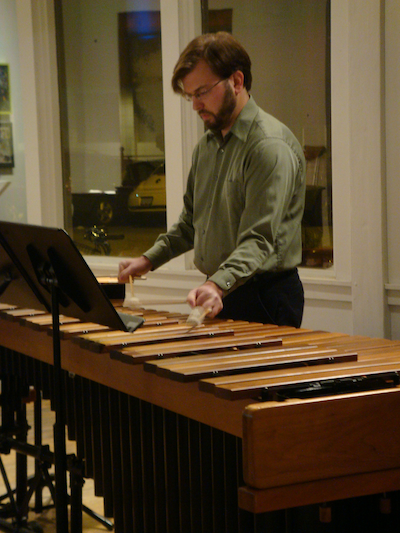 No Exit new music ensemble begins its season tonight at 7 with an online concert of solo works by Adam Roberts, Harald Genzmer, and percussionist Luke Rinderknecht (the premier of his Downfall), plus works by Villa-Lobos and William Grant Still. Read a preview article here. And looking ahead to Saturday evening, No Exit will host an online concert by Boston-based Transient Canvas.

And Youngstown State University continues its Dana Alumni Recital Series with a pre-recorded concert by pianist Sean Baran. Details in the Concert Listings.

In an interview for the Harvard Gazette, New Silkroad artistic director Rhiannon Giddens talks about mission and music-making in the age of COVID. Read Charting a path for the Silkroad here.

German composer Max Bruch died on this date in Berlin-Friedenau in 1920. Inspired by Brahms and mostly known as a choral composer during his lifetime, Bruch is now celebrated for a few instrumental works that have remained popular.

The first of his three violin concertos is one of those, performed here by Rachel Barton Pine and CityMusic Cleveland at St. Stanislaus in October, 2012. Another is his Kol Nidrei, played here in the same venue by CityMusic artistic director and cellist Amit Peled in October, 2019. And ChamberFest Cleveland featured selections from his Eight Pieces for Clarinet, Viola, and Piano on a June concert in 2019 (with Franklin Cohen, Hsin-Yun Huang, and Evren Ozel).

And on this date in 1943, Canadian American composer R. Nathaniel Dett died of a heart attack in Battle Creek, Michigan while on tour with a USO orchestra. Born in Drummondville, Ontario (now part of Niagara Falls), Dett moved across the border with his family at the age of 11, was the first Black student to graduate from the Oberlin Conservatory’s 5-year degree program, and studied composition during the summers at Harvard with Arthur Foote.

Dett reflected the opinions of Antonín Dvořák when he wrote, in 1918

We have this wonderful store of folk music—the melodies of an enslaved people … But this store will be of no value unless we utilize it, unless we treat it in such manner that it can be presented in choral form, in lyric and operatic works, in concertos and suites and salon music—unless our musical architects take the rough timber of Negro themes and fashion from it music which will prove that we, too, have national feelings and characteristics, as have the European peoples whose forms we have zealously followed for so long.

Perhaps Dett’s most ambitious work is his 1937 oratorio, The Ordering of Moses, premiered at Cincinnati’s May Festival in 1937. James Conlon, the Cincinnati Symphony, and the May Festival Chorus revisited the work in 2016. Listen here.

END_OF_DOCUMENT_TOKEN_TO_BE_REPLACED

Although it wasn’t the original plan to go online last weekend for the final round of the James Stroud Classical Guitar Competition, moving to a digital format suited the event well. Young performers Aytahn Benavi, Patricia Hernandez, Ian Tubbs, and Eric Wang played in the intimate setting of their own homes, giving everyone who tuned in a front row seat. END_OF_DOCUMENT_TOKEN_TO_BE_REPLACED

END_OF_DOCUMENT_TOKEN_TO_BE_REPLACED

Joining a long list of arrangers, Parker Ramsay has now transcribed the Variations for the modern pedal harp, an instrument for which he holds a master’s degree from Juilliard, in addition to a degree in history from Cambridge University, plus a master’s in historical performance (organ and harpsichord) and an artist diploma (organ) from Oberlin. END_OF_DOCUMENT_TOKEN_TO_BE_REPLACED