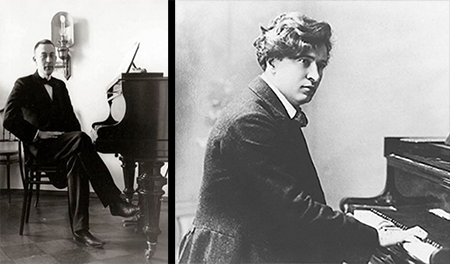 Today we honor two composer/pianists who came into the world on April Fools Day: Ferruccio Busoni in 1866 and Sergei Vasilyevich Rachmaninoff in 1873.

Born in Empoli, Italy, Busoni revealed himself to be a pianist and composer of note at an early age. After holding several teaching positions he dedicated himself to writing music and touring. Also a musicologist, Busoni’s visits to the United States sparked his interest in the music of North American Indigenous people. In addition to the Piano Concerto, his  transcriptions of works by J.S. Bach are legendary.

Prior to his 2019 performances of the monumental Piano Concerto with The Cleveland Orchestra, Garrick Ohlsson — who won the Busoni Competition in 1966 — told Clevelandclassical.com that during his lifetime, Busoni was a leading teacher, composer, and theorist as well as a great pianist. “People were drawn to him. He was in the middle of musical and artistic society. He taught in all sorts of places including the United States, Finland, and Russia — he was a true internationalist. But one of the problems with Busoni as a composer is that he’s very eclectic in his choice of language. If you see his name on the program, you don’t know if you’re going to have a tonal neoclassical, a completely atonal piece, or an overripe Romantic one like this.” Click here to read the preview.

Olhsson recorded Busoni’s five-movement concerto with The Cleveland Orchestra and Men’s Chorus under the direction of Christoph von Dohnányi in 1989. Click here for part one and here for part two.

Born in Semyonovo, near Novgorod, in northwestern Russia, Rachmaninoff’s life and celebrated career are well-documented. What people may not know is that he had a long relationship with The Cleveland Orchestra. Rachmaninoff first came to Cleveland in 1923 to perform his second piano concerto at the Masonic Auditorium on March 29 and 31, an event that coincided with the 25th anniversary of Adella Prentiss Hughes’ reign as Cleveland’s musical impresario. He returned in 1932 just after the Orchestra moved to Severance Hall, and four more personal appearances followed: November, 1937 (the Rhapsody on a Theme of Paganini), October, 1939 (Piano Concerto No. 1), March, 1941 (Beethoven Concerto No. 1 & the Paganini Rhapsody) and January, 1942 (Piano Concerto No. 2). The 1923 and 1932 engagements were led by Nikolai Sokoloff, the rest by Artur Rodzinski.

How was the almost 69-year-old pianist’s performance of his concerto received by the local critics?

Plain Dealer critic Herbert Elwell wrote, “There was even more enthusiasm when Rachmaninoff appeared in the concerto. As usual he gave to his own music luster and animation that only his brilliant pianism can give it. And it was with evident pleasure that listeners heard from his own hands the drooping wistful melodies that have now reached the domain of popular music.”

However, Cleveland Press critic Arthur Loesser was unfavorably impressed by the tempos. “It must be said that much of Mr. Rachmaninoff’s performance was on the streamlined side, some of it even seemed to be functioning with a tailwind. Those of us who know this concerto pretty thoroughly had trouble recognizing our friendly note-figures in the rush.”

Loesser went on to say, “Great praise must be bestowed upon Dr. Rodzinski…for the highly skilled accommodation of his beat to Mr. Rachmaninoff’s frequent willfulnesses as well as for his success in keeping the occasionally heavy scoring in good balance.” Click here to read our “From the Archives” preview and here for our “What would Rachmaninoff post on Facebook” feature.

On a more somber note, today we are reminded of the reality in which we live. It was one year ago that Jazz greats Ellis Louis Marsalis Jr. (85), and John “Bucky” Pizzarelli (94) died of COVID 19. Although both artists enjoyed long, fruitful careers, they still had a lot more to say — more concerts to play, music to write, and young people to inspire.

Click here to enjoy an evening of jazz and conversation with Bucky and John Pizzarelli — father-son virtuosos of the seven string guitar — recorded live in concert in 2014.

For its latest In Focus episode, “Visions and Impressions,” The Cleveland Orchestra makes a gesture in the direction of welcoming winds back into the action, although principal flute Joshua Smith’s contribution to the event comes in the form of two unaccompanied pieces that leave him looking very lonely on the Severance Hall stage. END_OF_DOCUMENT_TOKEN_TO_BE_REPLACED

LD’s artistic director Debra Nagy introduces the hour-long program with a discourse on the importance of the garden and its centerpiece, the fountain, for artists and musicians of the 14th century. Later in the program, Blue Heron artistic director Scott Metcalfe expands on the subject by exploring the Trinitarian metaphor behind that bubbling source of water in the Medieval mind. END_OF_DOCUMENT_TOKEN_TO_BE_REPLACED

END_OF_DOCUMENT_TOKEN_TO_BE_REPLACED

The latest program, which visits the ghetto and palace at Mantua and the ghetto and church at Venice, uses expressive instrumental music by Salamone Rossi, Giuseppe Sammartini, Antonio Vivaldi, and Alessandro Marcello, two of Benedetto Marcello’s 50 psalm settings, and Hebrew prayers and songs associated with Passover and Purim to evoke the rich cultural life of those towns. END_OF_DOCUMENT_TOKEN_TO_BE_REPLACED