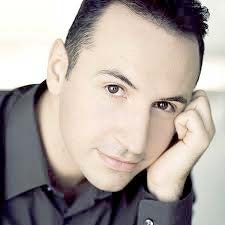 This week at Severance Hall, Robin Ticciati will lead The Cleveland Orchestra in concerts that feature Liadov’s Enhanted Lake and Sibelius’s Symphony No. 2. The program also includes one of the most popular piano concertos in the repertoire, the Concerto No. 2 by Sergei Rachmaninoff, with Macedonian pianist Simon Trpčeski as soloist.

Given the popularity of this concerto, we took the opportunity to once again visit the Orchestra archives to see what archivist Deborah Hefting could tell us about Rachmaninoff’s personal appearance and performance of the piece with the orchestra in 1942. We also spoke to Simon Trpčeski and asked him about the challenges of playing such a well-known piece.

“I need to say that it is a great challenge, as I think it is for any pianist who is playing such a popular piece like the Rachmaninoff 2nd concerto”, Trpčeski told by telephone from his home in The Republic of Macedonia. “One always tries to find something, even if it is a little thing [to do differently] in each performance, since it has been played millions of times.” 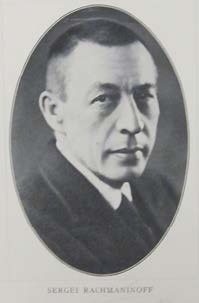 Trpčeski performed this concerto at the Blossom Music Center in July of 2009, and obviously made a good impression on the management. “I was surprised when I got the invitation to play the same concerto on the subscription series, and it brings an even bigger inspiration for me to play it in Severance Hall. I do have wonderful memories from the Blossom concert, so I am very honored that I have another invitation and touched that they asked for the same piece.”

Back to Trpčeski’s comment about trying to find that little something to do differently, he comments that especially in concertos like Rachmaninoff #2, Grieg, Tchaikovsky #1, it is normal for artists to try to put a personal mark on their performance. “I do think that some of the people would go in the wrong way in order to be different, and go beyond the border of logic and the natural dimension in the music. I try to respect the directions the composer has written in the score.”

By the time Sergei Rachmaninoff performed his Second Piano Concerto at Severance Hall on January 8 and 10, 1942 under the direction of Artur Rodzinski, the composer/pianist had already established a long relationship with The Cleveland Orchestra, having made his debut as soloist with the orchestra in the same concerto on March 29 and 31, 1923 under the direction of Nikolai Sokoloff. The 1942 concerts also included his symphonic poem The Isle of the Dead (1907), and the recently composed Symphonic Dances Op. 45. (1940). 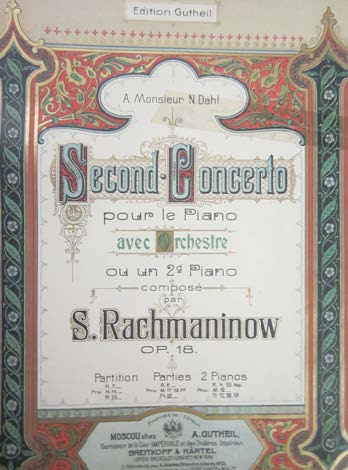 How was the almost 69 year old Mr. Rachmaninoff’s performance of his concerto received by the local critics?

Cleveland Plain Dealer critic Herbert Elwell wrote, “There was even more enthusiasm when Rachmaninoff appeared in the concerto. As usual he gave to his own music luster and animation that only his brilliant pianism can give it. And it was with evident pleasure that listeners heard from his own hands the drooping wistful melodies that have now reached the domain of popular music.” 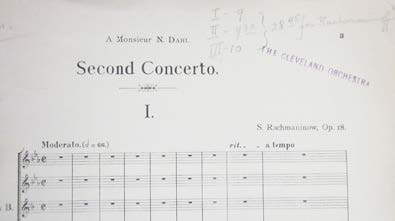 Elmore Bacon, writing for the Cleveland News, said, “While Rachmaninoff playing his own concerto might not have
reached the full brilliance he has displayed on other visits here, his performance was notable for its emotional values…it was a performance to be remembered.” 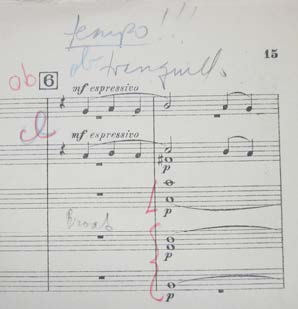 “It is true that for a few measures, notably near the beginning of the first movement, the orchestra and soloist couldn’t get completely together in the matter of tempo”, wrote Akron Beacon Journal critic Oscar Smith, “but such instances serve to prove that musicians are only human”. He added, philosophically, “It would be monotonous for them to play like gods all evening.”

Cleveland Press critic Arthur Loesser was unfavorably impressed by the tempos. “It must be said that much of Mr. Rachmaninoff’s performance was on the streamlined side, some of it even seemed to be functioning with a tailwind. Those of us who know this concerto pretty thoroughly had trouble recognizing our friendly note-figures in the rush.” Loesser went on to say, “Great praise must be bestowed upon Dr. Rodzinski…for the highly skilled accommodation of his beat to Mr. Rachmaninoff’s frequent willfulnesses as well as for his success in keeping the occasion- ally heavy scoring in good balance.” 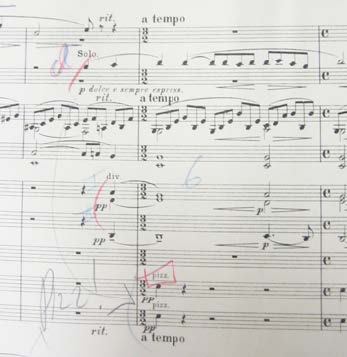 What does this week’s soloist, Simon Trpčeski have to say about these criticisms of Rachmaninoff’s performance? “I can certainly understand the people in that Cleveland audience who were not happy with the performance. From today’s point of view, if you listen to recordings of his performances of the piece, and look at the marks that he put in the score, you can find that he is not always respecting what he wrote. But on the other hand, what captures you is his mastery of the piano. You can feel that he could do anything on the piano, and this makes it very difficult for the rest of us pianists. Rachmaninoff [never had] technical problems playing his music. We are all struggling here and there and he was just jumping from one end of the keyboard to another.”

Mike Telin: This is your Severance Hall Debut.

Simon Trpčeski: Yes it is. I had a chance to visit the hall and to practice in the George Szell Library when I was there in 2009 for the Blossom Music Festival. It’s very majestic, which is so suitable for this concerto. I am very much looking forward to it. 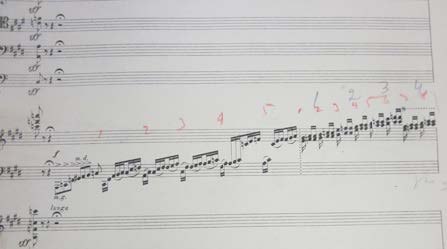 I remember the wonderful reaction from the audience and the orchestra at the Blossom concert. Everyone in the orchestra was really nice and so welcoming apart from being such great musicians. I think these characteristics bring a different dimension to the orchestra. If people are warm you can hear it during a performance, and you get a majestic feeling from that sound when you are playing with them.

MT: I watched your performance of this concerto with the Royal Liverpool Orchestra at the Proms on YouTube, and I enjoyed it very much. I can’t exactly put my finger on one thing over another, but you do make it sound fresh and new.

ST: Thank you so very much — and it is very rewarding for the artist when people do notice things, especially because it is such a popular piece. I come from a country where we sing and dance a lot, and apart from the fact that I had wonderful Russian teachers, I really try to sing on the piano and to be as natural as possible. I don’t even know how to explain it or to put it in words. I often say if I was a poet I was going to put what I was thinking in words, but I try to be a poet through the piano.

MT: Is it true that your first instrument was the accordion?

ST: Yes it was. I grew up in a very modest family in a small apartment, I have an older brother and sister so there were five of us and my grandmother lived with us too. This was a very common thing for many families in Macedonia, but I like to quote Pavarotti: “we had so little but no one had more then us.” The warm atmosphere in which I grew up really is priceless. 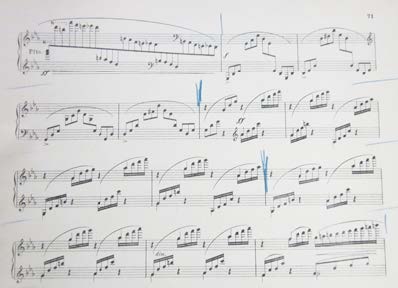 No one in my family had a musical education, but they were really into the folk music. One day my father bought this small accordion when I was three. He didn’t tell my mom, he just brought it home and believe it or not, I suddenly started to produce a melody with my right hand on the keyboard. Not with the left hand because of course I had to take lessons. I was very happy because this was such a great discovery for me. I continued to play until I was ten or eleven. I also began to study piano more seriously when I was seven, so eventually I did stop playing the accordion. It was my first love, and it remains so even thought I don’t play it that often anymore. 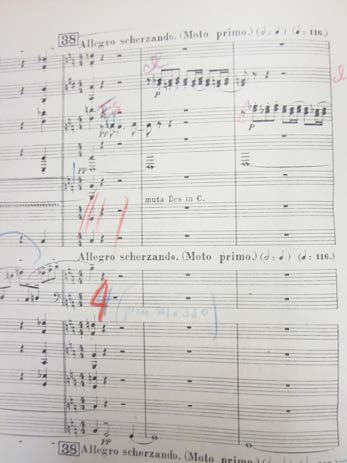 The contact with folk music has really helped me a lot with the natural feeling of rhythms and also the natural sense of the lyrical melodies.
The way that I grew up was wonderful and the social life was very intense; we were singing and dancing and had family and friends gather- ing every other day. Macedonian folk music is full of uneven rhythms. For us the normal meter is 5/8, 7/8, 9/8, 11/8, all these rhythms that come from our language. I find a connection there with the rhythms and the singing part of the classical music. All of the great composers knew not only the folk music of their nations but also the folk music of other nations and they were inspired by it. I hope that one day you will have the chance to come to Macedonia and experience this small but very beautiful country.

MT: I hope so too. I must tell you that this is the first time I have ever called Macedonia and this call has been very fun.

As always, many thanks to Cleveland Orchestra Archivist Deborah Hefting, and to Orchestra Librarian Robert O’Brien for providing the conducting score marked and used by Artur Rodzinsky for the 1942 performances. Photo of Rachmaninoff: photographer unknown. The composer-pianist’s signature is from the Orchestra’s Autograph Book. Below: the addendum to Rachmaninoff’s contract (he received $2,400 for his appearances) reflects the wartime conditions in 1942.

Jackson began the program with a recitation of Langston Hughes’ poem “Helen Keller” — the first of five poems by Hughes that served as interludes between each piece on the first half. END_OF_DOCUMENT_TOKEN_TO_BE_REPLACED

Pianos with pins and tape on strings, a bass drum and tam tam, crotales, Almglocken, and vibes. Microphones were hooked up all around the instruments. The feed was sent to speakers around the room. Lighting designer Nicholas Houfek hung incandescent globes over the arrangement of instruments from thin black wires stretching across the beams. END_OF_DOCUMENT_TOKEN_TO_BE_REPLACED

From the podium, Elim Chan set an ambitious tone for the evening. The rising star conductor, here in her Cleveland Orchestra debut, has a commanding style, and every twist and turn in Saturday’s performance tracked closely with her baton. END_OF_DOCUMENT_TOKEN_TO_BE_REPLACED