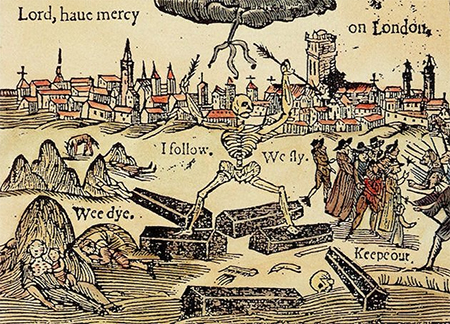 This week in “Resilience,” Apollo’s Fire is revisiting in words and music London’s Great Plague of 1665 and the cholera and dysentery outbreaks during America’s Civil War. In the same vein, British-born conductor Nicholas McGegan — music director emeritus of the Bay Area’s Philharmonia Baroque Orchestra and popular guest conductor of The Cleveland Orchestra —  spent part of the pandemic lockdown developing an illustrated lecture about the 1665 pestilence. It streams at 2:00 pm on October 14. Read an article in San Francisco Classical Voice here.

THIS WEEK FROM MUSICAL AMERICA:

Nashville Symphony principal oboe Titus Underwood is featured in the latest episode of “Musical America Unscripted.” Today marks the anniversary of that venerable publication, which brought out its first issue in 1898. (And check out MA’s weekly survey of streaming events. There’s a link at the top of our Concert Listings page.)

We already mentioned Apollo’s Fire’s “Resilience” concerts that begin tonight in Akron (read our feature story here). Also tonight, organist Christopher Houlihan brings his Vierne 150th Festival to a conclusion with a solo recital of works by Louis Vierne from the chapel of Trinity College Hartford (see the Almanac below for more about the French organist).

German composer Heinrich Schütz was born in Kostritz on this date in 1585. Renowned for his evocative settings of texts, Schütz’s vocal music comes in all shapes and sizes, from two-part motets that reflected the decimation of choirs during the Thirty Years War, to splendid polychoral works he wrote after study trips to Venice. It’s a pity that his only opera, Daphne, has been lost.

Listen here to Concerto Palatino perform his astonishingly expressive motet Anime mea liquefacta est from the Symphoniae Sacrae, and here to his funeral cantata, Ein Musikalische Exequien, a Protestant requiem commissioned long before it was needed by a patron who wanted to enjoy it while he was still alive. Lionel Bringuier leads the Belgian choir Vox Luminis, who sang most recently in Cleveland at St. John’s Cathedral in October, 2018.

French organist and composer Louis Vierne was born on this date in Poitiers. Legally blind, Vierne served as organist of the Cathedral of Notre-Dame in Paris from 1900-1937, collapsing at the console during a recital.

Tune in to the live stream of Christopher Houlihan’s all-Vierne recital tonight to hear him play selections from the 24 Pièces de fantaisie, Op. 51, and the Symphony No. 4, Op. 32. (Details in the Concert Listings).

There’s also a celebrated recording of Vierne’s Mass for choir and two organs recorded in Notre-Dame and featuring the composer’s later successor Pierre Cochereau. Listen here. (NB: most of the accompanying photos are of Notre-Dame in Montréal!)

On this date in 1930, Japanese composer Toru Takemitsu was born in Tokyo. Two of his nature-inspired compositions are available in performances by the CIM New Music Ensemble, Keith Fitch, director. Click on the links to watch Water-ways (from a November, 2015 concert), and Rain Spell (from February, 2018).

And Australian composer Carl Vine was born on October 8, 1954 in Perth. His Piano Sonata No. 1 was among the works that Cleveland International Piano Competition laureate Spencer Myer played in the 2005 contest. Watch those performances here and here.

END_OF_DOCUMENT_TOKEN_TO_BE_REPLACED

Although it wasn’t the original plan to go online last weekend for the final round of the James Stroud Classical Guitar Competition, moving to a digital format suited the event well. Young performers Aytahn Benavi, Patricia Hernandez, Ian Tubbs, and Eric Wang played in the intimate setting of their own homes, giving everyone who tuned in a front row seat. END_OF_DOCUMENT_TOKEN_TO_BE_REPLACED

END_OF_DOCUMENT_TOKEN_TO_BE_REPLACED

Joining a long list of arrangers, Parker Ramsay has now transcribed the Variations for the modern pedal harp, an instrument for which he holds a master’s degree from Juilliard, in addition to a degree in history from Cambridge University, plus a master’s in historical performance (organ and harpsichord) and an artist diploma (organ) from Oberlin. END_OF_DOCUMENT_TOKEN_TO_BE_REPLACED