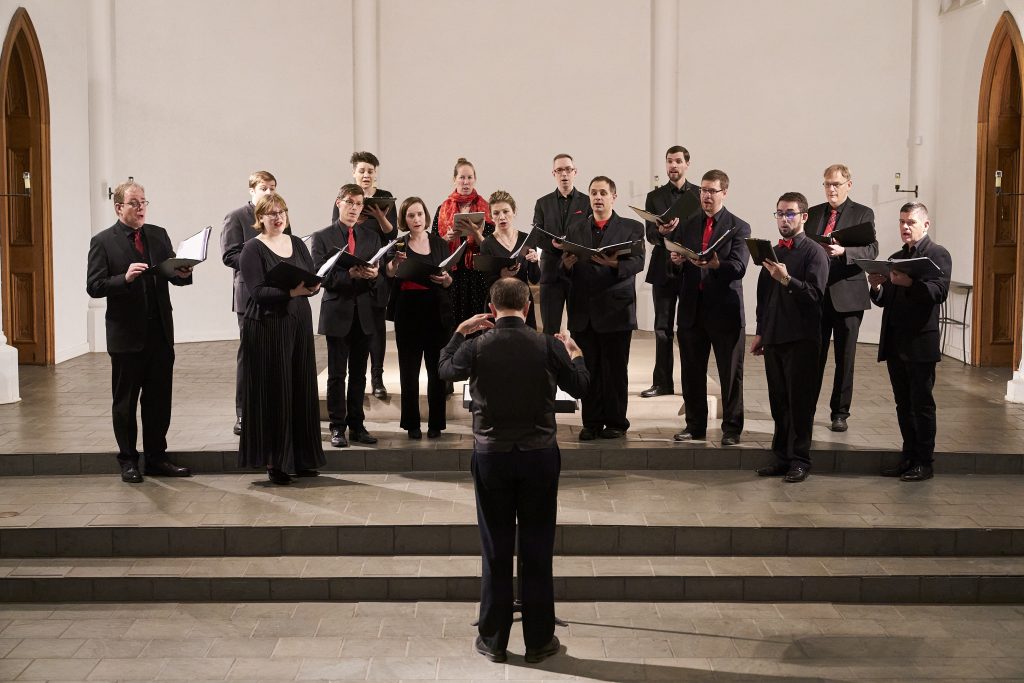 One local and one remote event to mention today.

The final Tuesdays at the Covenant noontime concert of the season features organist Jonathon Moyer in music by Nicolaus Bruhns, Jean Langlais, and two of his original works: Chaconne, Oculi mei semper ad Dominum, and A Meditation on “Herzliebster Jesu,” using both the gallery and chancel organs. It’s free.

And this week we’ll be listing a series of online performances emanating from the Biennial Boston Early Music Festival (which alternates with its West Coast counterpart held in Berkeley, California). This evening’s program features the five male singers of Cinquecento and a guest in the Requiem that Josquin des Prez’ student Jean Richafort wrote in memory of his mentor, plus some of Josquin’s works that Richafort quotes. There’s a fee for the program. Details in our Concert Listings.

After being exiled for fourteen months, as were all singing groups during the pandemic, Quire Cleveland (above) has announced three concert programs for 2021-2022, each to be presented in three different venues. All programs are free next season, including Carols for Quire XI (December 2-4), Bohemian Treasure: Demantius’ St. John Passion (March 4-6), and Resonant Glory: Music for Grand Spaces (May 13-15). Click here for more details.

The Cleveland Classical Guitar Society and El Comité Mexicano de Cleveland announce the release of a series of videos funded by the Cleveland Foundation’s Creative Fusion Program. With works composed and arranged by three virtual artists-in-residence, and with the collaboration of more than twenty professional artists, one hundred amateur and student musicians from Cleveland and Mexico, and a partnership with The Cleveland Orchestra, the series is designed to increase cultural awareness of important social issues. Videos will be released twice weekly over five weeks beginning today June 8, on the CCGS YouTube Channel. Watch the first video here.

One of Schumann’s extended works, Scenes from Goethe’s Faust, remains relatively unknown. It’s a magnificently flawed creation, over which the composer obsessed for a decade and wrote in pieces from back to front, beginning with the finale, “Chorus Mysticus,” in 1844 and concluding with the Overture in 1853.

Widely regarded as Schumann’s magnum opus, the Scenes have been performed here and there since they were exhumed in the 1970s. I had the good fortune of singing in one of the earlier revivals — Boston Symphony performances with the Harvard Glee Club, Radcliffe Choral Society, and New England Conservatory Chorus in 1966 led by Erich Leinsdorf with an all-star cast of soloists that included Hermann Prey, Beverly Sills, Charles Bressler, Thomas Paul, Veronica Tyler, Tatiana Troyanos, Florence Kopleff, and Batyah Godfrey. You can listen to a live recording here.

As a composer, Schulhoff was fortunate to have lived through the anything-goes years between the World Wars, which allowed him to dabble in a range of musical styles. As a Jew who espoused Communist sentiments, he was unlucky to have been active during the Nazi regime. He died of tuberculosis in the Wultzburg concentration camp on August 18, 1942.

Enjoy Schulhoff’s Duo for Violin and Cello, played here by Jaime Laredo and Sharon Robinson, and his Sonata for Unaccompanied Violin, performed here by Alexi Kenney at the Robert Miller Gallery in New York in 2016. And ChamberFest Cleveland gave its patrons a taste of Schulhoff’s Dada-inspired works with Marjorie Maltais’ performance of his Sonata Erotica in June of 2016.

One of 20th century England’s most prolific composers and resourceful arrangers, Gordon Jacob became well-known for works like his William Byrd Suite, arrangements of Elizabethan-era pieces from the Fitzwilliam Virginal Book. That inspired Gerard Hoffnung’s challenge to Jacob to write variations on a Scottish folk song for a bizarre collection of instruments to be performed at one of the Hoffnung Musical Festival concerts in London in November, 1966. Listen here to the composer leading his Variations on Annie Laurie with an ensemble that includes heckelphone, contrabassoon, serpent, harmonium, hurdy gurdy, bass tuba, and a pair of piccolos.

This year the majority of the concerts are being held at a single location, the magnificent Grove Amphitheatre in Mayfield. Although the venue has no permanent seating, lawn chairs and blankets are the perfect solution. Picnics are encouraged and the responsible consumption of alcohol is permitted. Think Blossom Music Center on a smaller scale and you’ll get the picture. END_OF_DOCUMENT_TOKEN_TO_BE_REPLACED

The series opener, “Legends,” celebrated the return of in-person concerts with music by Antonín Dvořák, Enrique Granados, Paul Wiancko, and Franz Schubert. The musicians displayed the wide range of expression and color, enchanting communication, and technical brilliance that chamber music can provide. END_OF_DOCUMENT_TOKEN_TO_BE_REPLACED

Music director Franz Welser-Möst set the stage in his introductory video remarks, describing the Berg era as “the ‘Roaring 20s’ aftershock of World War I, a blooming of musical styles never experienced before or since.” END_OF_DOCUMENT_TOKEN_TO_BE_REPLACED

Aside from that, the beautifully curated program primarily features captivating performances of solo works that are presented in a logical progression of sound and temperament. END_OF_DOCUMENT_TOKEN_TO_BE_REPLACED

END_OF_DOCUMENT_TOKEN_TO_BE_REPLACED

Henderson began the evening with his own arrangements of three movements from J.S. Bach’s Suite No. 4 for solo cello. The Prelude features a series of descending patterns interspersed with virtuosic passages, and while these passages effectively highlighted Henderson’s technical skills, he also demonstrated dramatic expertise by playing each descending pattern with different nuances of emotion. The Sarabande, with its poise and stately pace, was juxtaposed beautifully with a lively Bourrée, where notes flurried in quick succession, but Henderson never sacrificed precise articulation for musical momentum.  END_OF_DOCUMENT_TOKEN_TO_BE_REPLACED