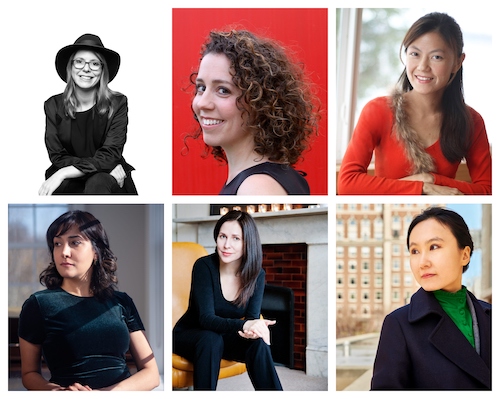 •Organist Katherine Johnson at the Covenant at noon

•A new executive director for ChamberFest, and recent honors for Cleveland Chamber Choir and Dana students

•Almanac: the chamber music of Louise Farrenc, and the Tejano music of Lydia Mendoza

From noon to 1, you can catch organist Katherine Johnson on the Tuesday Noon series at Church of the Covenant. The program of music by Samuel Scheidt, William Byrd, Maurice Duruflé, and Margaretha Christina de Jong is offered both in person and online. Details here.

In a new project announced last week, the League of American Orchestras is commissioning works by six women composers: Anna Clyne, Sarah Gibson, Angel Lam, Gity Razaz, Arlene Sierra, and Wang Lu (pictured above). In addition, the organization is forming a consortium of 30 orchestras — five orchestras for each composer — to perform those works over the next three seasons. The premieres will be given by The Philadelphia Orchestra, Sarasota Orchestra, Kansas City Symphony, San Diego Symphony, Detroit Symphony, and New York Philharmonic. Read the press release here.

Beginning June 1, Jessica Peek Sherwood will be the new, full-time Executive Director of ChamberFest Cleveland, moving up from the organization’s Operations department, where she started last November. A flutist, Sherwood was a founding member and administrative director of Atlanta-based new music ensemble Sonic Generator. Since moving to Cleveland, she has served as Instrumental Music Director at Hawken Upper School and Director of Operations for the Cleveland Classical Guitar Society. Sherwood takes over from Jacqueline Taylor, who has been ChamberFest’s part-time Executive Director since July 2020.

The latter half of this month brought good news for the Cleveland Chamber Choir as well as low brass students at the Dana School of Music. CCC was named a National Finalist for the 2021-2022 American Prize in the Choral Performance Professional Division. And over in Lexington, Kentucky, Dana students placed in the finals at the Midwest Regional Tuba-Euphonium Conference Chamber Music Competition — plus, Bruce Deal placed third in the Mock Band Tuba Competition.

We’ll highlight two women — one pianist-composer, one guitarist and singer — who share a birthday on the 31st of May.

As a composer, it was in chamber music where she left her strongest legacy. Her two piano quintets, Op. 30 and 31, were especially renowned, and she won the Académie des Beaux-Arts’ Chartier Prize twice. The premiere of her 1849 Nonet in E-flat, Op. 38, helped her achieve a level of pay equal to that of her male colleagues.

Jumping forward by a century and westward by an ocean, we come to Mexican-American guitarist and singer Lydia Mendoza. Born in Houston in 1916, Mendoza has been described as “The Mother of Tejano Music” — that popular genre bringing together influences of Mexico and America. She is celebrated for the proud display of her culture during a time in the U.S. when such displays invited harassment and even deportation.

Among the many honors she accumulated over the course of her six-decade career, Mendoza performed at the inauguration of Jimmy Carter and was part of the first class of National Heritage Fellowships given by the National Endowment for the Arts. Of the estimated 200 Spanish-language songs she recorded across several labels, she was particularly famous for Mal Hombre, which she sings in an arresting performance here.

END_OF_DOCUMENT_TOKEN_TO_BE_REPLACED

The strings-only work by Berg has made relatively frequent appearances on the Orchestra’s programs. In 2021, the musicians recorded it for the In Focus series, and it appeared again on last year’s European tour. Friday’s rendition maintained the group’s characteristic light and effortless playing, each section blending as much as possible to echo the work’s original form as a string quartet. At fifteen minutes total, the piece is quite short, but the dense encoded musical meanings require some extra-attentive listening. Splitting up the three movements ensured that each one could be appreciated on its own. END_OF_DOCUMENT_TOKEN_TO_BE_REPLACED