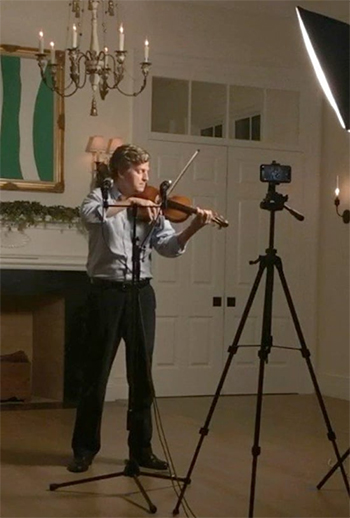 Violinist James Ehnes, whose third concert of all the Beethoven sonatas for the Cleveland Chamber Music Society — along with his many other scheduled performances — was nixed by the pandemic, has seized the opportunity to start something new. As he writes on his website,

While giving some online masterclasses in April, I found myself telling students over and over to create their own opportunities to share their music, and how that was more important than ever during these unprecedented times. I realized that for me as well, making my own opportunities was tremendously important, not just to keep artistically engaged, but also to hopefully find a model that can be sustainable for performing musicians during this extended time of upheaval in the industry.

Having outfitted his home music room in Florida with studio lights, an audio interface, and microphones (iPhones serve as video cameras), Ehnes is set to release the first of six episodes of Music from Home program today, Saturday, June 27. The program, which includes the first unaccompanied sonatas of J.S. Bach and Eugène Ysaÿe, can be streamed for 48 hours for $10, or streamed anytime for $20. Details and complete schedule here.

And Cleveland’s Les Délices, who previously announced that the ensemble’s entire season in 2020-2021 will move online, will offer a second, concurrent series called SalonEra — “a live-streamed, early music-focused variety show designed as a salon experience for the 21st century.” The free twice-monthly broadcasts begin on August 24 (with a suggested donation of $10). Click here for the schedule.

THIS WEEKEND ON THE WEB AND AIRWAVES:

WCLV, 104.9 Ideastream revisits an April, 2007 Cleveland Orchestra performance of J.S. Bach, Stravinsky (with pianist Joela Jones), and Verdi (with the Cleveland Orchestra Chorus) on Saturday, and a 2007 Spring Festival concert, “Richard Strauss: His Life — His Inspirations” on Sunday.

And the first Sunday evening broadcast in the series “Best of ChamberFest Cleveland” features music by Golijov and Tchaikovsky. Details here.

The Chicago Sun Times has published a story about the Chicago Sinfonietta’s “Musical Pathways” initiative, designed to bring greater diversity to the world of the symphony orchestra. Click here to read.

And the New York Times talked to a number of conductors who have all but disappeared from view due to the pandemic. Read the story here.

Cleveland-based Burning River Baroque programmed de La Guerre’s cantata Judith in 2019. This performance in Foxburg, PA, includes a discussion of women composers and painters during the composer’s time. And harpsichordist Elizabeth Farr decodes one of de La Guerre’s unmeasured preludes — a popular genre of the era. You can listen here and follow along with the score to see what’s involved.

Admitted to Oberlin Conservatory at the age of 14 where he graduated at 18 and went on to study at Curtis, George T. Walker was the first African American composer to win a Pulitzer Prize (in 1996, for Lilacs). Click here to watch a documentary, and here for a performance of the Theme and Variations from his Piano Sonata No. 1 performed by Dianna White-Gould on a Cleveland Musicians Against Racism concert. And go here to listen to Lorne Monroe performing Walker’s Cello Concerto with the New York Philharmonic under Zubin Mehta. Walker died in 2018.

Jack Gallagher is Professor of Music at the College of Wooster. There are 17 performances of his compositions available on YouTube, including his Ancient Evenings and Distant Music, performed by the University of Akron’s Solaris Woodwind Quintet. CD’s of Gallagher’s Symphony No. 2 and Piano Music have been reviewed on ClevelandClassical.com.

Daniel Asia was a student of yesterday’s featured composer, Jacob Druckman. Now at the University of Arizona at Tucson, Asia taught at Oberlin from 1981-1986. Check out the range of his works here, and listen here to his electronic composition, Miles Mix (based on the music of Miles Davis).

Richard Rodgers is certainly the best-known of all the names in this list, having teamed up first with Lorenz Hart and then with Oscar Hammerstein II (from 1943) to dominate the world of the American Musical in the mid-20th century. Drawing on the talents of orchestrator Robert Russell Bennett, Rodgers and Hammerstein transformed the Musical, previously a loose collection of songs and dances, into a cohesive, dramatic artform.

One example of the sophistication of Rodgers’ music is Billy Bigelow’s “Soliloquy” from Carousel, which has found its way onto symphonic programs and vocal recitals. Baritone Nathan Gunn performs it here.

Social commentary sometimes finds its way into Rodgers’ and Hammerstein’s shows, like “You’ve Got to be Carefully Taught” from South Pacific — a moral lesson in the middle of a piece that shows its age in other ways. Here’s the song as sung by William Tabbert in the original 1949 Broadway production, and here’s a little pirated video shot from the front rows of the Blossom Pavilion in 2018 where soprano Audra McDonald pairs it with Children Will Listen.

Postscript: when South Pacific was premiered, two Georgia state legislators said that the show was a fine piece of entertainment, but the song “contained an underlying philosophy inspired by Moscow.”

Northeast Ohio’s Les Délices has long been that rarest of beasts: a world-class organization so proud of its region (ours) and repertoire (distinct niches in pre-1800 music) that it never tries to be everything to everyone, paradoxically making a strong case for a broad, curious international following. In the December episode of its SalonEra series, the ensemble embraces its strengths and community to marvelous effect. END_OF_DOCUMENT_TOKEN_TO_BE_REPLACED

END_OF_DOCUMENT_TOKEN_TO_BE_REPLACED

Another I remember fondly is Gian Carlo Menotti’s Amahl and the Night Visitors.  Commissioned by NBC, the one act, made-for-television opera, premiered on December 24, 1951, at the network’s studios in New York’s Rockefeller Center. And now, through the wonders of technology, Cleveland Opera Theater has created a magical new production of the work which is available on demand through January 6, 2021 (Three Kings Day). END_OF_DOCUMENT_TOKEN_TO_BE_REPLACED

Jessen has now followed up with her second solo CD, Winter Chapel. Recorded on January 17, 2020 in Oberlin College’s Fairchild Chapel and available on Carrier Records, the album is a continuum in Jessen’s journey to push the musical boundaries of her instrument and herself as an improviser. END_OF_DOCUMENT_TOKEN_TO_BE_REPLACED