Departing slightly but refreshingly from the time-honored pattern of classical era quartet + modern piece + major romantic work, the Dover Quartet brought a challenging but engaging contemporary quartet by David Bruce to the Cleveland Chamber Music Society series at Plymouth Church on December 3, prefacing it with an evanescent Britten quartet and following it with dependably sturdy Brahms.

Bruce’s Lick Quartet, a commission for the Dover by the Dallas Chamber Music Society and the Amsterdam Concertgebouw, confidently walks the borderline between classical and jazz idioms. It takes its title from “a melodic fragment that has been used by countless jazz musicians over the years, and more recently has become something of a joke, an internet ‘meme,’” as the composer wrote in his notes.

Bruce went on to say that because early sketches for the quartet began to resemble “the lick,” he decided to challenge himself to use that gesture unironically and in something of the same subliminal way that Shostakovich embedded his initials in the Eighth Quartet.

The resulting piece pays homage in its four movements to the rhythms of Tigran Hamasyan (“Tigran’s Lick”), the “sunny simplicity” of Dvořák (“Antonín’s Lick”), the complex jazz meters of Jacob Collier (“Jacob’s Lick”), and the general quirkiness of Janáček (“Leoš’s Lick”).

The piece sounds much more straightforward than its notation implies, and the Dover must have slaved over it for hours to make it flow. A YouTube video of the Quartet at the Concertgebouw shows score and performance side by side. 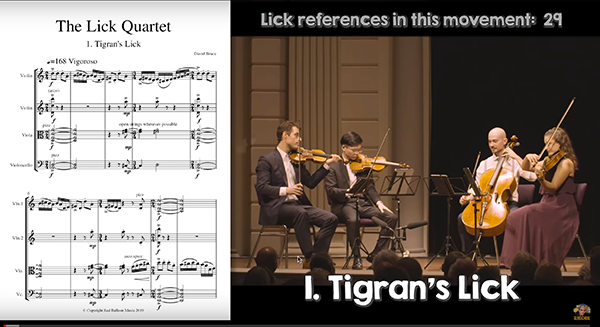 By December 3 in Cleveland, the Dover had relaxed into their formidable task, giving an exuberant reading of The Lick Quartet that was fun to listen to. Tigran’s movement was like a string quartet hoedown with an abundance of offbeat strokes. Antonín’s was peppy and modal-sounding. Jacob’s was busy and restless. Leoš’s was energetic and repetitive, prophesying a vision of Czech minimalism.

Benjamin Britten’s Quartet No. 1 in D came together in a California cabin in 1941, and reflects the anxiety the pacifist composer suffered about the Second World War. Its shimmering gestures, diaphanous textures, angular themes, and tangled motives must have sounded disquieting to mid-century ears. The third movement, Andante calmo, offers some respite, despite some Purcellian cross-relations and its exploration of both high and low registers, soon countered by spinning fragments and big unisons over nervous cello figures in the finale. The Dover gave the Britten a clean, sensitive reading.

The ensemble sent the audience off into a chilly night with a warm, responsive reading of Brahms’ Quartet No. 3 in B-flat, which toes the line between convention and innovation as effectively as the Bruce quartet did between genres. Violist Milena Pajaro-van de Stadt shone in her third-movement solos.

END_OF_DOCUMENT_TOKEN_TO_BE_REPLACED

Rodgers & Hammerstein’s Cinderella was originally produced for television in 1957 — seven years after the animated Disney film was released — and starred Julie Andrews. According to the Rodgers & Hammerstein website, it was viewed by over 100 million people. END_OF_DOCUMENT_TOKEN_TO_BE_REPLACED

The story line has its origin in an 1855 play and an 1842 farce that Thornton Wilder mined for his 1938 play The Merchant of Yonkers. When that turned out to be a flop, in 1954 Wilder made the crucial decision to re-center the show around the character of the legendary marriage broker Dolly Gallagher Levi and renamed it The Matchmaker. END_OF_DOCUMENT_TOKEN_TO_BE_REPLACED

The Dodero Center for the Performing Arts at the Gilmore Academy in Gates Mills is one feature of an impressive campus. The auditorium is shallow, the stage is deep, and the ensemble played without a shell. Throughout the program, the sound, especially in instruments’ lower registers, tended to disappear. END_OF_DOCUMENT_TOKEN_TO_BE_REPLACED