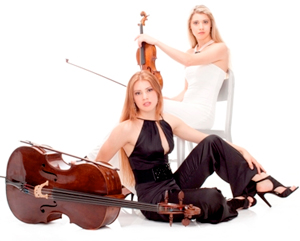 We are often told that classical music seems to belong only to the elderly. It ain’t necessarily so, judging from last Tuesday evening’s concert at Lorain County Community College, when a largely college-age audience heard a sparkling recital given by duo parnas. The performers, too, are of the younger generation — two sisters barely into their twenties and already enjoying significant attention in the professional concert scene.

Born into a musical family (their grandfather was a noted cellist), the pair of 22-year-old violinist Madalyn Parnas and her slightly younger sister, cellist Cicely Parnas, hit the big time six years ago, when they took first prize in the International Chamber Music Ensemble competition at Carnegie Hall. Since then they have balanced playing as a duo with a hefty schedule of individual concerto appearances with regional orchestras. Together, they recently performed the Brahms Double Concerto with the Alexandria (VA) Symphony Orchestra, just after returning from a whirlwind tour of Macao and Shanghai.

Their recital was a stimulating kaleidoscope of the violin-cello duo repertoire. The most well-known piece on Tuesday’s program was Maurice Ravel’s Sonata from 1922, a substantial work in which the composer seems to have challenged himself to move from the dreamy ballet music of his early career to a more knotty modernism. The Ravel was an excellent showpiece for the duo, who met its technical challenges with virtuosity and rose to its musical demands with an intensely symbiotic energy.

String duos, by definition, lack the inner voices that soften and enrich the more frequently heard string quartet literature. In the stark acoustics of the Studio Theater at LCCC, each of the two strong voices in the Ravel could have come across as isolated or even competitive with each other. But the Parnas sisters played with such a highly developed sense of ensemble that each assertive phrase segued with vitality and confidence into its counterpart in the other voice.

My favorite piece of the evening was the 1932 duo by Russian-born Alexander Tcherepnin. Its five short movements push each performer to the limit with a gnarly and even strident chromaticism, an encyclopedic variety of string techniques, and an edgy obsessiveness full of tension and surprise. Tcherepnin’s mixture of angst-ridden rhetoric and lyric melancholy anticipates the quartets of Shostakovich.

Parnas Duo, a work commissioned for the group in 2012 by prolific American composer Paul Moravec, gives the players a splendid opportunity to explore the range of colors latent in this simple pairing of instruments. On first hearing, I was struck most by the piece’s plenitude of techniques — slides, plucks, runs, perpetual motion, bowings over the fingerboard and over the bridge.

The recital opened with a nod to the classical in the form of a duet in the galante style, attributed to Haydn, notable for deceptively simple expositions that lead surprisingly and swiftly to virtuosic complications and variations. Later, and on a grander scale, the duo brought the recital to a flamboyant close with the famous Passacaglia, in which the Norwegian composer Johan Halvorsen runs a simple tune by Handel through a set of calisthenics worthy of the Marine Corps. The Parnas sisters didn’t shy away from any of the pyrotechnics and made this piece of romantic nonsense a dazzling coda to the program.

The recital was part of the Signature Series, presented by LCCC composer-in-residence Jeffrey Mumford. I gather that a number of the young people in the audience were Mumford’s students, and it was a pleasure to see them listening closely, taking notes, and applauding warmly. Yes, there is a future audience for classical music!

END_OF_DOCUMENT_TOKEN_TO_BE_REPLACED

Rodgers & Hammerstein’s Cinderella was originally produced for television in 1957 — seven years after the animated Disney film was released — and starred Julie Andrews. According to the Rodgers & Hammerstein website, it was viewed by over 100 million people. END_OF_DOCUMENT_TOKEN_TO_BE_REPLACED

The story line has its origin in an 1855 play and an 1842 farce that Thornton Wilder mined for his 1938 play The Merchant of Yonkers. When that turned out to be a flop, in 1954 Wilder made the crucial decision to re-center the show around the character of the legendary marriage broker Dolly Gallagher Levi and renamed it The Matchmaker. END_OF_DOCUMENT_TOKEN_TO_BE_REPLACED

The Dodero Center for the Performing Arts at the Gilmore Academy in Gates Mills is one feature of an impressive campus. The auditorium is shallow, the stage is deep, and the ensemble played without a shell. Throughout the program, the sound, especially in instruments’ lower registers, tended to disappear. END_OF_DOCUMENT_TOKEN_TO_BE_REPLACED