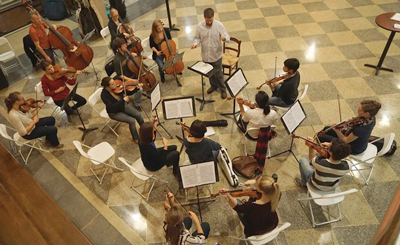 A small but appreciative audience was on hand to hear the 16-member ensemble, who performed with youthful sincerity and enthusiasm, filling Tucker Hall with beautiful Romantic melodies.

From the beginning of the Dvořák, Ellis and his ensemble captured the five-movement work’s lush harmonies and Bohemian allure. After the Moderato first movement, the opening theme of the second movement, “Tempo di Valse,” charmed with its simple harmonies. The end of the Scherzo, where the themes are recalled, was especially attractive.

It is difficult to understand why Suk’s Serenade is not played more often: it captivated completely on this first hearing, demonstrating much more depth than merely a charming outing for a string orchestra.

The opening movement immediately revealed Earth and Air’s warm, resonant, and unforced tone. They played with lush vibrato — lithe and supple — with just the right amount of sentimentality. The interplay of the inner voices was delightfully clear. In the Adagio, which began with a flowing cello solo that was echoed softly by the violins, the violas achieved a distinctively dark, mellow tone. This tender, soft beginning moved on to an impassioned climax where all the complex inner parts made their full effect.

The final movement was quickly paced but deeply dramatic in its interpretation. Ellis, who ably kept everything together, was prudent in his attention to detail, at one point calmly erasing an errant violin entrance. Hats off to concertmaster Solomon Liang, principal second violin Koko Watanabe, violist Cynthia Black, and cellist Sophie Benn for their outstanding solo contributions throughout.

Earth and Air’s fervor and unbridled spirit at times bested them: their technique and intonation wavered ever so slightly, and some transitions were in need of more finesse. Time, maturity, and more experience as an ensemble will help this welcome addition to Cleveland’s music scene become a more cohesive, consistent string orchestra. All of the parts and pieces are there.

The ensemble plans two more concerts this season, both in Tucker Hall at St. Paul’s. On Friday, January 29 at 7:30 pm, a program entitled “In the White Silence” will feature music by Grammy and Pulitzer award-winning composer John Luther Adams. A concert entitled “de Las Americas” will be presented on Friday, April 8 at 7:30 pm.

The cimbalom was the feature of the show, an instrument capable of taking on many personas. Its performer, Chester Englander, has shaped his career around the instrument, and has inspired composers to write more repertoire for it, some of which was presented on the program. END_OF_DOCUMENT_TOKEN_TO_BE_REPLACED

You wouldn’t expect that acoustic from a glance at the nave, which is wide and long, but not especially lofty. But when I guest conducted a local amateur choir and professional orchestra in Beethoven’s Mass in C there a few years back, during the first rehearsal we released the final chord of the “Gloria” and listened in astonishment for the next several seconds. The sound continued to roll down the space like the big wave that surfers dream about. END_OF_DOCUMENT_TOKEN_TO_BE_REPLACED