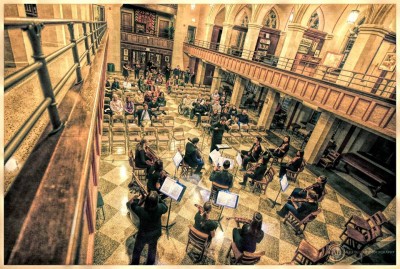 Last Friday night, April 8, the Earth and Air String Orchestra presented Losing Innocence: English Music at the Turn of the 20th Century in Tucker Hall of St. Paul’s Episcopal Church in Cleveland Heights. It was the perfect setting for the interesting, well-organized, and beautiful program, and the 18-member string ensemble performed with exceptional skill.

As music director David B. Ellis explained, the turn of the 20th century marked the end of the Victorian period, an era characterized by a return to Romanticism and an interest in Gothic Revival Architecture. Staid and decorous, the era emphasized privacy at the expense of public exposure. The composers presented fit well into that restrained British mood, which did not truly absorb the experimental ideas and poetry of the French Symbolists, Mallarme, Baudelaire and others.

The Introduction and Allegro opened the concert. Elgar composed it for an entire concert of his music by the then newly-formed London Symphony. Although the composer intended it to be a nod to the Baroque concerto grosso form, the musical intensity of this performance lent the piece a romantic air. In addition to the solo quartet, solos bounced around the orchestra, and the section players handled them equally well. Though it involved none of the spatial or timbral techniques of the Fantasia, the piece afforded the opportunity to experience the performers’ uniformly impressive skills and to hear virtuoso playing in a busy contrapuntal context.

A full orchestra descending fanfare opens the piece in G minor, but soon moves to the major mode. Elgar said that the slower viola solo was a remembrance of a song heard in the distance when he was on holiday in Wales. The intermingling of the fanfare with the Welsh theme gives way to an intense and gorgeous fugue in place of a development section. The recapitulation leads to a powerful climax, an orchestral unison echoed by the solo quartet, and yet another recurrence of the Welsh theme. The performance was exceptional.

The Fantasia, based on a Phrygian mode theme Thomas Tallis composed for Archbishop Parker’s Psalter of 1567, closed the program and involved the most complex instrumental grouping. For this performance, the solo quartet sat in front. Orchestra 1, the larger group, sat behind the quartet, and Orchestra 2, consisting of single desks of players, sat in the rear. Though this setup was interesting, locating the two orchestras on opposite sides of the stage would have helped to further intermingle the timbres.

Violist Aaron Mossburg’s unaccompanied solo about five minutes into the 15-minute piece was absolutely stunning, its motive gradually picked up by the full ensemble. This idea about two-thirds of the way through and served to produce the major fortissimo climax of the piece.

In between came three works, two more by Elgar and one by Frank Bridge.

Elgar probably composed his Elegy for Strings in memory of August Jaeger, his friend and editor at the publishing firm of Novello. Jaeger had championed Elgar’s works and his passing after a long illness was painful to the composer. Since the Nimrod movement in the Enigma Variations was a portrait of Jaeger, yet another dedication would have been inappropriate. In an effective programming decision, Ellis placed the short and peaceful piece just before the Tallis Fantasia to serve as a kind of serious introduction to the longer work.

Elgar’s three-movement Serenade for Strings, Op. 20 (1892), the earliest piece on the program, opened the second half of the concert. The orchestra gave the first movement a lovely, warm presentation, and the second, suggesting more of Elgar’s mature style, was equally graceful.

Frank Bridge is remembered principally as Benjamin Britten’s composition teacher. His Suite for String Orchestra (1910) is a delightful 4-movement work. The third movement Nocturne was especially ingratiating and afforded the opportunity to hear fine solos from the orchestra principals; cellist Hannah Moses’ was especially expressive and beautiful. Though Bridge’s early works are sometimes dismissed as “salon music,” they deserve greater attention.

Jackson began the program with a recitation of Langston Hughes’ poem “Helen Keller” — the first of five poems by Hughes that served as interludes between each piece on the first half. END_OF_DOCUMENT_TOKEN_TO_BE_REPLACED

Pianos with pins and tape on strings, a bass drum and tam tam, crotales, Almglocken, and vibes. Microphones were hooked up all around the instruments. The feed was sent to speakers around the room. Lighting designer Nicholas Houfek hung incandescent globes over the arrangement of instruments from thin black wires stretching across the beams. END_OF_DOCUMENT_TOKEN_TO_BE_REPLACED

From the podium, Elim Chan set an ambitious tone for the evening. The rising star conductor, here in her Cleveland Orchestra debut, has a commanding style, and every twist and turn in Saturday’s performance tracked closely with her baton. END_OF_DOCUMENT_TOKEN_TO_BE_REPLACED