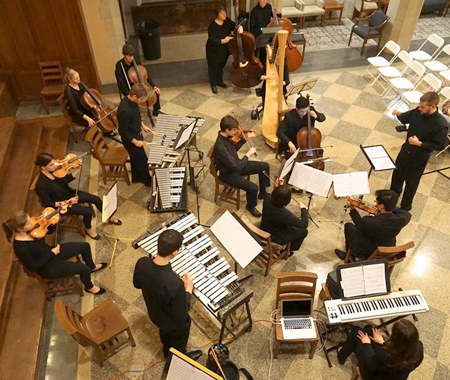 The music of John Luther Adams, perhaps one of the most widely-appreciated of contemporary composers, has been performed with some frequency in Northeast Ohio. His Drums of Winter, Wail, Inuksuit, and Veils and Vesper have recently been heard in venues ranging from concert halls to Lake View Cemetery. On January 29, David B. Ellis conducted his new Earth and Air: String Orchestra in Adams’s In the White Silence in Tucker Hall at St. Paul’s Episcopal Church in Cleveland Heights.

Adams, who won a Pulitzer for his Become Ocean, spent 36 years of his life contemplating the natural world in Alaska, the first decade while living in a primitive cabin (read a 2008 New Yorker profile by Alex Ross here). In the White Silence — in common with the work of poet John Haines, who had similar experiences in the vast, soundless Alaskan wilderness and whose poetry is referenced in the score — explores the unexpectedly wide range of colors huddled together at the whitest end of the spectrum, as well as the variety of sounds you can hear in silence when you train your ears to appreciate it.

Written in 1998 and scored for string orchestra, solo string quartet, celesta, two vibraphones, and harp, the work lasts about 80 minutes, although it feels like it could go on all week. Morton Feldman’s influence is strong here.

To Adams, white means diatonic, and he uses only the seven notes represented by the white notes on a keyboard in a variety of ways. Sometimes the whole string section plays static chords of mildly dissonant character against rising scales played at different tempos by the harp and vibraphones. Sometimes the texture thins out to solo string quartet, or to solo instruments (violin, viola, cello) in various combinations with the percussion instruments or harp.

About half an hour into the piece, you begin to sense a kind of structure: every five minutes or so, a brief moment of silence inserts a bookmark into the proceedings. Then the quiet relentlessness of C Major begins anew — or repeats something that might have happened before. 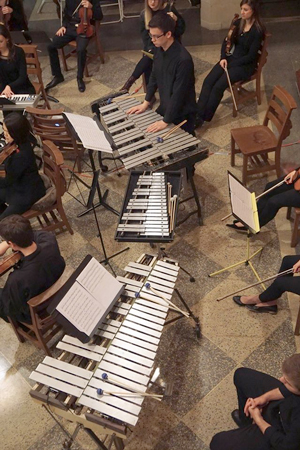 An important psychological plateau emerges about 45 minutes into the work — a moment when you either feel your mind beginning to wander or you’re getting so drawn into the music that you lose your sense of time and place. (Both can happen at once.) Then about six minutes before the end, a tiny shift in tonality, which seems seismic by comparison to the stasis of what has gone before, nudges the ear back to reality.

Ellis led his eighteen excellent players in a deeply concentrated performance, deftly cuing entrances and marking changes of meter — none of which seemed really to affect the progress of the musical material. The orchestra sounded warm and alluring in the hall’s live acoustic. The small but engaged audience applauded warmly at the end, though you suspected that not a few listeners wished in retrospect that they had opted to sit in the comfortable chairs and settees off to the side of Tucker Hall rather than on the folding chairs in the middle. Or maybe that they had brought a book or their knitting, or a yoga rug, so meditation-inspiring Adams’s music proved to be.

The piece can be heard in a live performance by Timothy Weiss and the Oberlin Contemporary Music Ensemble recorded in 2003, when Adams was teaching at the Oberlin Conservatory.

Banks carried four different saxophones with him to the audience-less West Shore Unitarian Universalist Church, along with two classic pieces he had transcribed and three powerful new works — one of them his own. He explained at the start that the new pieces would be receiving “workshop performances” as he prepares them for his Young Concert Artists (YCA) debut recital at New York’s Merkin Hall on March 10, when he will again be joined by Bjerken. END_OF_DOCUMENT_TOKEN_TO_BE_REPLACED

Episode 5 is subtitled “Musical Patterns,” a nod to the fact that three of the four works are examples of “minimalism,” or maybe more precisely, “repetitive music.” END_OF_DOCUMENT_TOKEN_TO_BE_REPLACED

END_OF_DOCUMENT_TOKEN_TO_BE_REPLACED

Artistic director Timothy Beyer set the tone for the opening work by Jeremy Rapaport-Stein, appearing like the floating head of the Wizard of Oz in a quasi-film noir introduction. Beset with a parched throat, he turned the emcee job over to a ventriloquist’s dummy, who carried on in time-honored vaudeville style while Beyer drank a glass of water. END_OF_DOCUMENT_TOKEN_TO_BE_REPLACED