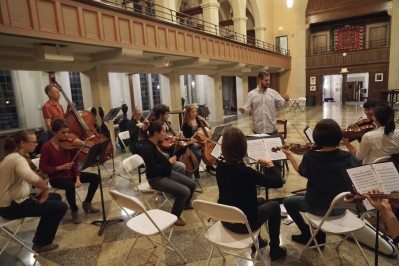 When conductor David B. Ellis chose to call his new ensemble Earth and Air: String Orchestra, the name called out for a program dedicated to music inspired by nature. On Friday, January 29, beginning at 7:30 pm in Tucker Hall at St. Paul’s Episcopal Church in Cleveland Heights, audiences will have the rare opportunity to experience composer John Luther Adams’ In the White Silence when Ellis leads Earth and Air in the 75-minute work.

Cleveland is no stranger to John Luther Adams’ works. Many may remember the composer’s Veils and Vesper and Inuksuit, two lengthy immersion pieces that the Cleveland Museum of Art staged at Historic St. John’s Episcopal Church in Ohio City and at Lakeview Cemetery in September of 2014. Inuksuit notably spread a small army of percussionists over a wide swath of territory. The composer says that In the White Silence was “influenced by the exquisite colors of the sub-Arctic winter night on snow…harmony and color floating in space, suspended in ‘time undisturbed.’”

During a recent telephone conversation, Ellis described the work as “modal, and filled with rhythmic complexity that transpires in a sea of beautiful sound. It’s a very transparent sonic version of white-on-white paintings. What’s interesting to me is that while it is complex, it sounds almost like Renaissance music, so it has a feeling of being incredibly modern and incredibly ancient at the same time. I think that’s the reason that I and a lot of others have been taken by the piece. And like nature, it’s beyond our scope of understanding.”

Premiered in 1998 by the Oberlin Contemporary Music Ensemble under the direction of Timothy Weiss, the work was later recorded by the ensemble for New World Records. In his review of the 2003 release, classicstoday.com writer David Hurwitz said:

…In the White Silence, where Morton Feldman rubs shoulders with Alan Hovhaness, should win the composer many friends, for it’s a gorgeous 75 minutes of meditative stillness. The form of the work, such as it is, is simple. A string orchestra plays soft tone clusters (the composer calls them “clouds”) out of which emerge a series of lovely, modal episodes for string quartet, harp, celesta, and tuned percussion (vibraphone and bells).

David Ellis is excited to find out exactly how the musicians and the audience will react to the piece. “It has a Zen-like attitude and it takes a lot of physical and mental stamina to perform. The listener will lose track of what is going on, but that is the point,” Ellis said. “When you think of John Luther Adams, you think of his relationship with Alaska and its natural wilderness, and this piece is his interpretation of that environment. I think that one of the things that makes In White Silence work especially well is that if you are out in the woods, you can admire the beauty of the nature without seeing every leaf.”