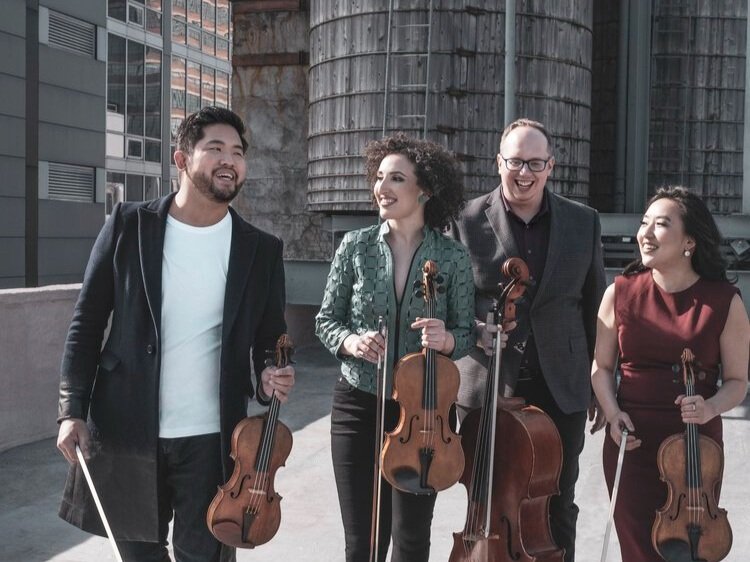 Summer 2022 has seen a surge in travel, as those who were kept from family, friends, and favorite places over the past two years try to make up for lost time. The upcoming July 4 weekend should be one of the busiest yet. But for those staying in the Cleveland area, the ENCORE Chamber Music Institute’s Music & Ideas Festival is offering audiences a musical getaway on July 3 at 4:00 pm with “Tales of Travel & Transformation.”

The featured performers, the Verona Quartet, are a group of world travelers themselves. Hailing from four different countries, the musicians — violinists Jonathan Ong and Dorothy Ro, violist Abigail Rojansky, and cellist Jonathan Dormand — have performed as a group across four continents. Over the past two years of their residency at Oberlin Conservatory, the Quartet has appeared in venues all over Northeast Ohio — this weekend, they will add the Gilmour Academy’s Dodero Center to that list.

A travel-themed concert is apt for a group that embraces the concept of cultural migration — their 2021 debut album, Diffusion, celebrates the influence of folk music in works by Janáček, Szymanowski, and Ravel. Not only that, but the name Verona — a tribute to William Shakespeare — ties in to the broader theme of ENCORE’s 2022 season: “Storytellers.”

In addition to the Verona, who are the Quartet-in-Residence at ENCORE’s Summer Academy, the concert will feature other Festival faculty and fellows including violinists Steve Miahky and Sibbi Bernhardsson, violist Eric Wong, and cellist Max Geissler. One piece linked to the travel and transformation theme is Osvaldo Golijov’s Tenebrae, which the composer wrote to contrast his experiences in Israel and New York.

“I wanted to write a piece that could be listened to from different perspectives,” Golijov wrote in his program notes. “That is, if one chooses to listen to it ‘from afar,’ the music would probably offer a ‘beautiful’ surface but, from a metaphorically closer distance, one could hear that, beneath that surface, the music is full of pain.”

Preceding the Golijov will be Franz Schubert’s expansive Piano Trio No.2 in E-flat. Jonathan Dormand of the Verona will join violinist Jinjoo Cho and pianist Christina Dahl for the 45-minute work, which is packed with thematic and melodic material. “I haven’t actually performed it before, so I’m very excited to get this opportunity,” Dormand said in a recent phone conversation. “There’s a sort of mystical element and a tinge of sadness to his music, even when it’s in a major key.”

Kicking off the evening will be Quiet Music by Andrew Rindfleisch, ENCORE’s 2022 Highlighted Living Composer. Max Geissler will perform the solo cello piece, which transforms the instrument’s sound through the use of harmonics and a practice mute. And before the first note, a 3:00 pm panel discussion will feature Cleveland business owner Sofia Syed, who will recount how her own travel experiences inspired a cross-country move to open her coffee shop, Roasted Tremont.

At the other end of the program is Tchaikovsky’s Souvenir de Florence, for which the Verona will be joined by two ENCORE Fellows: violist Joe Burke and cellist David Dietz. “It’s always interesting to have new guest members come into the group — it changes the dynamic of the performance in a good way,” Dormand said. Since the Verona has had plenty of experience with the piece, he expressed excitement that the Fellows are approaching it with fresh eyes. “You only get to play something for the first time once, and that brings something powerful to a performance.”

Souvenir is Tchaikovsky’s love letter to Firenze, where he spent time during Russia’s bitter winter months. The eloquent four-movement work was his first for string sextet, an instrumentation he called “unimaginably difficult” — but eventually his persistence paid off. The composer’s final verdict? “I’m terribly pleased with myself.”

Jackson began the program with a recitation of Langston Hughes’ poem “Helen Keller” — the first of five poems by Hughes that served as interludes between each piece on the first half. END_OF_DOCUMENT_TOKEN_TO_BE_REPLACED

Pianos with pins and tape on strings, a bass drum and tam tam, crotales, Almglocken, and vibes. Microphones were hooked up all around the instruments. The feed was sent to speakers around the room. Lighting designer Nicholas Houfek hung incandescent globes over the arrangement of instruments from thin black wires stretching across the beams. END_OF_DOCUMENT_TOKEN_TO_BE_REPLACED

From the podium, Elim Chan set an ambitious tone for the evening. The rising star conductor, here in her Cleveland Orchestra debut, has a commanding style, and every twist and turn in Saturday’s performance tracked closely with her baton. END_OF_DOCUMENT_TOKEN_TO_BE_REPLACED