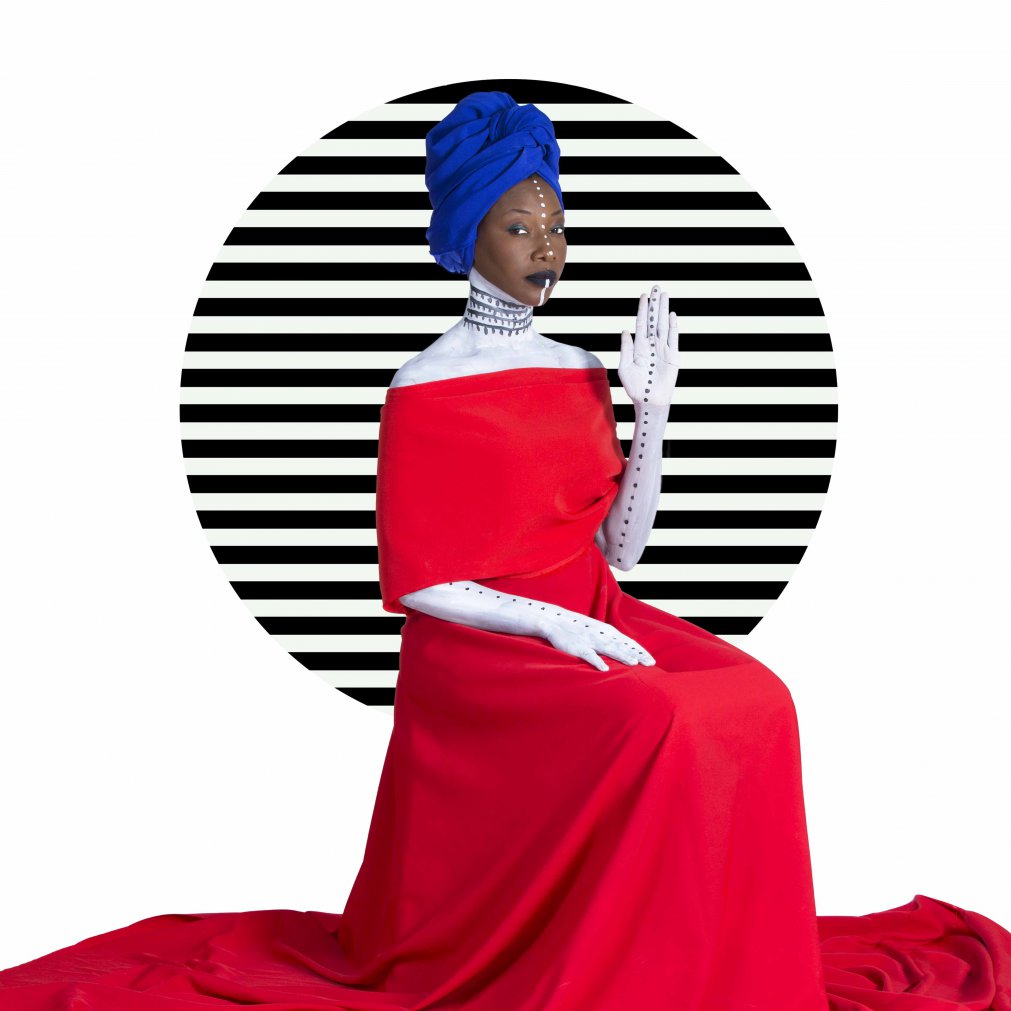 Balance is a key word in describing singer-songwriter, guitarist, and actor Fatoumata Diawara.

There’s her music, where she aims to respect her Malian roots while embracing international influences.

There’s her love of pop music, contrasted with her lyrics, which can venture into heavy subjects — the antithesis of bubblegum.

And there’s the fact that, against those sometimes dark lines of text, she radiates joy onstage.

Clevelanders were deprived of that music and that stage presence two years ago, when Diawara’s trip to the Cleveland Museum of Art was canceled. So it was good news when her name appeared on the lineup for the Museum’s Performing Arts Series this season: she’ll finally make her visit to Gartner Auditorium next Wednesday, March 2 at 7:30 pm. Tickets are available here.

I had the opportunity to speak with her on the phone before the news of that 2020 cancellation, and the conversation still sticks out to me: not only compelling artistically, but very real from a human standpoint. There was a vivid kindness in her voice, and she gave off a sense of wisdom in her ability to raise difficult topics with directness and calm.

Hopefully those qualities come through in the transcript below, which has been edited slightly for this new occasion.

She picked up the phone in Lake Como, Italy. And when someone tells you they’re at Lake Como, there’s only one possible response.

Jarrett Hoffman: It’s so beautiful there.

JH: I imagine that it’s also a great place to write music.

FD: Of course! It’s so nice when you take your guitar to the lake — you get inspiration right away.

(In the background one of her kids, a five-month-old at the time, offered commentary.)

FD: My son is here, smiling and running around. Last year I was at the Grammy Awards with this one in my belly, and nobody could tell because I was dressing differently.

JH: And you were there for two Grammy nominations, including for Best World Music Album for your most recent album, Fenfo (Something to Say). Let’s talk about your music and the idea of staying true to your roots while taking on global influences. How do you do that — through lyrics, language, or musical style?

FD: It’s everything together. I think it’s also the fact that I’m a woman, and the world needs to see more female leaders — we are not so many. And lyrics are important. In my generation, people like to sing, “Baby, my love” and things like that — “Baby, baby, my baby.”

I don’t sing, “My baby.” I like to write about subjects which are important for me, because life was tough when I was a child. You know, my background is very heavy and I have a lot to say about it, so I just need to open one door to my past and I can make a new song. But the melodies have a bit of pop in them — I like pop songs.

JH: If you don’t mind talking about it, I know that one difficult event from your childhood was running away from home and going to France to join a street theater troupe. As I understand it, your parents hadn’t been supportive of your artistic ambitions.

FD: That part is important because we all need support, you know? And being a teenager is when you really feel how much people love you, or how much they don’t love you. Also, as a child, my relationship with grown people was always strange — I would feel like they were judging me.

It was heavy. I was about to ask myself if it was necessary to leave: it came to my mind to kill myself. And when you look at life today, you say, wow, how many people have been killing themselves? That’s why I call myself a survivor, because I could have done that. Many people do, before they can find their happiness — let’s call it their freedom. If you don’t have that, you’re still a slave of society and tradition.

JH: You mentioned finding freedom, and I think that’s something that comes across in your performances — you have a very active and joyful stage presence. Is that something that’s always been the case for you as a performer, or something that’s come over time?

FD: It’s come over time. And it’s because I can’t believe that I survived. For me, being on stage is still like a dream coming true. And it’s huge to me. Every time, this feeling comes to me, telling me, ‘You are in the light right now, and your life is your freedom. You’re doing what you wanted to do — you are what you wanted to be.’

And when you realize that, you’re just happy, even if you’re talking about being adopted. I didn’t grow up with my parents, and I’m still learning from my mom. I’m in touch with her — we see each other, we look at each other, but we don’t really know each other. I’m really thankful that I could find all this love from other people, because from my family it was difficult.

JH: I also want to talk about your acting [including in the 2014 film Timbuktu]. You’ve said before that the music you write tells the story of who you are. I think of acting as something different, in that you’re taking on another person’s story. Do you feel any overlap between music and acting?

I think you have to adapt yourself to play another character. It’s quite difficult, but at the same time it’s easy for me because I like diversity in personality — how we can be multiple people inside of one soul.

I really like acting, but most of the time, it’s not my writing, my narration, or my story. I do what people tell me to do in acting. But in the music, I compose, I write, I arrange, I play — I’m involved 200%.

Jackson began the program with a recitation of Langston Hughes’ poem “Helen Keller” — the first of five poems by Hughes that served as interludes between each piece on the first half. END_OF_DOCUMENT_TOKEN_TO_BE_REPLACED

Pianos with pins and tape on strings, a bass drum and tam tam, crotales, Almglocken, and vibes. Microphones were hooked up all around the instruments. The feed was sent to speakers around the room. Lighting designer Nicholas Houfek hung incandescent globes over the arrangement of instruments from thin black wires stretching across the beams. END_OF_DOCUMENT_TOKEN_TO_BE_REPLACED

From the podium, Elim Chan set an ambitious tone for the evening. The rising star conductor, here in her Cleveland Orchestra debut, has a commanding style, and every twist and turn in Saturday’s performance tracked closely with her baton. END_OF_DOCUMENT_TOKEN_TO_BE_REPLACED