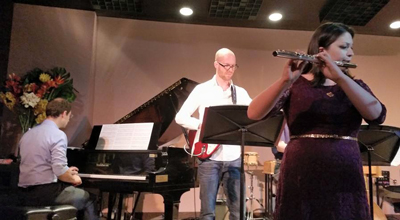 “We’re an ensemble that usually forgoes performing in churches in favor of the less traditional warehouse settings,” FiveOne Experimental Orchestra executive director Jeremy Allen told us during a recent telephone conversation. “When we’re looking for a reverberant Cathedral, we usually look for a post-industrial one like the Screw Factory. But when the opportunity came about to perform this concert, it was a no brainer.” On Friday, November 13 at 8:00 pm at Disciples Christian Church in Cleveland Heights, FiveOne Experimental Orchestra (51XO) will present Sacrum Silentium.

In addition to the gorgeous sanctuary with its vaulted ceiling, the church presented the group with the chance to perform with organ. The sacred setting also inspired the group to shape their program in a way that would promote a sense of repose and contemplation. “How often do we really stop to listen and reflect?” Allen said. “Society doesn’t really promote these things, so we have to be intentional about creating these opportunities.”

Although the phrase Sacrum Silentium comes from a sacred context, Allen said they are using it to refer to the absence of words, with an eye to contemplation, reverence, and meditation. “That said, it should not imply a dry and boring concert, as anybody who’s ever been to a 51XO concert would know,” Allen said with a laugh. “We’re very excited about the compelling music that we have planned.”

The program will begin with Jordan Nobles’ Simulacrum. Nobles, the award-winning Canadian composer, embodies the group’s commitment to trying new things, Allen said. “Simulacrum is an open-score work with a lead-line that is passed among the players, while other members of the group follow, playing short musical cells to accompany that line. It’s kind of like the composer has provided us with image and color palettes, and we get to decide on the brush strokes.”

David Crowell’s Like A Machine was commissioned by 51XO and premiered by the ensemble at Zygote Press last spring. “It’s swift, vibrant, and self-propelling — the musical equivalent of what you’d imagine clean energy to sound like.”

Rounding out the concert’s first half will be Sarah Kirkland Snider’s Pale as Centuries for flute, clarinet, guitar, and bass. “This is a new piece for us, but it’s wonderfully written. It has a very nice arc and fits the setting of the concert very well.”

The second half opens with another open-score work, Jeremy Allen’s own Broccoli September. “We’ve played it before, and although the concept is to perform it without rehearsal, after some discussion, we decided to experiment with it in different ways. I’m excited about what’s been happening. It’s taking on a new life.”

Allen said he is most excited about the world premiere of John HC Thompson’s Fine. Awful. Whatever. Great. “The title comes from words he had scribbled in the margins of the manuscript when he was writing the piece. It’s scored for violin, cello, piano, guitar, and percussion. I don’t want to be a spoiler, but John has drawn on his rich jazz background, and he’s placed his own delightfully quirky stamp on it.”

The program will conclude with the group’s own mixed chamber arrangement of Arvo Pärt’s Pari Intervallo, featuring Disciples Christian Church organist and music director Adam Kukuk. “Pärt’s music is imbued with peace and contemplation. I’ve wanted to arrange something by him for 51XO for some time, and this concert was the perfect opportunity. There are other arrangements of the work, but this is the first version that I know of for mixed chamber ensemble of this size. It includes all eight members of the group, plus organ. The piece takes your breath away and gives it back to you.”

Allen wants everyone to bring a friend. The concert is free, although a freewill offering will be taken.

END_OF_DOCUMENT_TOKEN_TO_BE_REPLACED

Rodgers & Hammerstein’s Cinderella was originally produced for television in 1957 — seven years after the animated Disney film was released — and starred Julie Andrews. According to the Rodgers & Hammerstein website, it was viewed by over 100 million people. END_OF_DOCUMENT_TOKEN_TO_BE_REPLACED

The story line has its origin in an 1855 play and an 1842 farce that Thornton Wilder mined for his 1938 play The Merchant of Yonkers. When that turned out to be a flop, in 1954 Wilder made the crucial decision to re-center the show around the character of the legendary marriage broker Dolly Gallagher Levi and renamed it The Matchmaker. END_OF_DOCUMENT_TOKEN_TO_BE_REPLACED

The Dodero Center for the Performing Arts at the Gilmore Academy in Gates Mills is one feature of an impressive campus. The auditorium is shallow, the stage is deep, and the ensemble played without a shell. Throughout the program, the sound, especially in instruments’ lower registers, tended to disappear. END_OF_DOCUMENT_TOKEN_TO_BE_REPLACED