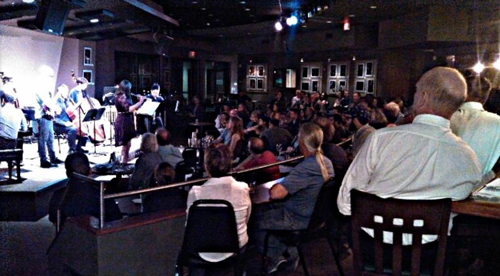 Mashup (noun): A mixture or fusion of disparate elements. Mashup (music): A musical genre encompassing songs which consist entirely of parts of other songs.

On Friday, May 13 at 9:00 pm at the Bop Stop, 51XO (FiveOne Experimental Orchestra) will present “The Mashup Concert.” The program will feature mashups, overlays, and works that live somewhere in between the pop and classical worlds.

Musicians have been mashing things up for centuries in one way or another. Sometimes the desired outcome was to create a new musical style, while other times the purpose was to create comedy. Whatever the reason, creating mashups has never become passé.

“For my own mashup,” said Allen, “I’ve taken some material from the first and last tracks of Philip Glass’s Glassworks and mashed it with Gnarls Barkley’s Who’s Gonna Save My Soul, and Tears for Fears’ Mad World. Both of those songs work well aesthetically and musically.”

There are many sub-genres of mashup music, including overlay, crossover, and arrangements of pop tunes in the classical style and vice-versa (think Liberace), all of which will be on the program.

“There is an overlay using Terry Riley’s In C,” Allen said. He also finds it fitting to include music from Glassworks on the program because it’s a pivotal classical record due to its crossover mentality. “It dates from 1982, and Glass’s intent was to produce an album that would be in the mainstream, not just in classical music.

“We’ve also chosen some pieces by Marc Mellits (Machine V) and David Crowell (Waiting in the Rain for Snow) that are clearly influenced by popular music,” Allen said. “Marc has one foot in pop and the other in classical and he owns them both so well. It’s OK to have fun, and I think this program is a great way to end our season.”

Click her for a printable copy of this article

END_OF_DOCUMENT_TOKEN_TO_BE_REPLACED

Rodgers & Hammerstein’s Cinderella was originally produced for television in 1957 — seven years after the animated Disney film was released — and starred Julie Andrews. According to the Rodgers & Hammerstein website, it was viewed by over 100 million people. END_OF_DOCUMENT_TOKEN_TO_BE_REPLACED

The story line has its origin in an 1855 play and an 1842 farce that Thornton Wilder mined for his 1938 play The Merchant of Yonkers. When that turned out to be a flop, in 1954 Wilder made the crucial decision to re-center the show around the character of the legendary marriage broker Dolly Gallagher Levi and renamed it The Matchmaker. END_OF_DOCUMENT_TOKEN_TO_BE_REPLACED

The Dodero Center for the Performing Arts at the Gilmore Academy in Gates Mills is one feature of an impressive campus. The auditorium is shallow, the stage is deep, and the ensemble played without a shell. Throughout the program, the sound, especially in instruments’ lower registers, tended to disappear. END_OF_DOCUMENT_TOKEN_TO_BE_REPLACED