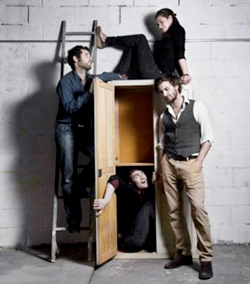 “Many times baroque ensembles have a leader with different musicians playing at each concert,” Anna Besson, flutist for the Paris-based baroque quartet Nevermind said during a Skype interview. “But from the beginning, because we were friends, we wanted to be a quartet. Just us four and no one else.”

The following is an edited transcription of that twenty-minute conversation.

Mike Telin: Congratulations on all of your success.

Anna Besson: Thank you. We’re just getting started but we’re very lucky for now. We met five years ago at the Conservatoire Supérieur in Paris and then two, maybe three years ago we decided to form the quartet. We used to play concerts with two singers, and people would say, ‘Well, it works, but when only the four of you play, it works really well.’ So we decided to stay as a quartet, not an ensemble with a leader. We had a problem because Jean has a solo career and many people thought that he was the leader of Nevermind and we were just some guys who were playing with him. But the four of us are Nevermind. It’s a collective, and as we like to say, it is a democracy.

Mike Telin: Please tell me about the program.

AB: We decided to be a quartet thanks to the Telemann Paris Quartets, so we’ll be paying No. 6 in e-minor. We’re also playing music by Jean-Baptiste Quentin and Louis-Gabriel Guillemain. They’re French composers from the middle of the 18th century, and nobody knows them.

MT: How did they discover them?

AB: We used to have sight reading sessions. We’d play a lot of music and sometimes we would find a treasure, like these. We found these pieces in the Bibliothèque de France, the huge library in Paris, and we just kept reading and reading because the music is so beautiful. We also decided to record some of them for our first CD, which will be out in March.

MT: In addition to the concert you will also be presenting master classes. What do you try to convey to young musicians who have prepared so well, but may be a little nervous?

AB: We understand because we have all been in the same situation. When we were students we had to play in master classes with everybody around listening to us, and it’s very scary. But you’re not doing a show, it’s for the students. You are there to bring your own experiences, but you can learn a lot from the students, so it really is about sharing. For all of us it’s not like ‘We’re the big master and you, the students, have to learn it this way’. 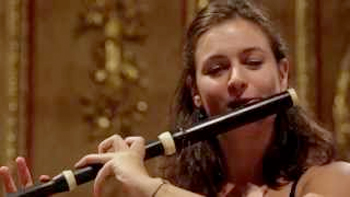 MT: I understand that you are also play the Irish flute: how did you become interested in that?

AB: Maybe the question is how did I get interested in baroque flute? I became interested in it because of playing the Irish flute. When I was nine or ten my father bought me a CD of Michael McGoldrick, who is a wonderful Irish flute player. I listened to that CD many, many times. Then, when I was twelve, I went to Ireland with my parents and bought an Irish flute. I started to play and would go to master classes to learn the traditional Irish ornamentation. Then when I was eighteen, some guys told me that if I liked the wooden flutes I should try the traverso. So I did and I loved it. I still play modern flute, too.

MT: How did you come to know Michael Lynn at Oberlin?

AB: It’s funny, because I recorded some Baroque flute music on SoundCloud, and one day I received a message from Michael that said, ‘Beautiful playing,’ which I thought was very kind. Then this past year I received a message from him on Facebook and we started to write to each other. At first, he wanted to invite me to Oberlin, then he discovered Nevermind, so we decided to try to organize something for all of us. But it all started with SoundCloud and Facebook, so social media can be very useful. I’m looking forward to meeting Michael because he seems wonderful.

MT: I’m certain I’m not the first to ask, but how did you decide on the group’s name?

AB: [laughing] Everybody does ask, and sometimes we just answer, ‘Why not?’ In France we have a lot of Baroque ensembles and orchestras which have names coming from the 18th century. They’re all very French and very beautiful. Also, many people think that this kind of music is only for the elite. But we are a young group and we’re trying to touch the largest audience possible. If we arrive at a concert saying we are L’Ensemble de France that attitude won’t change.

We play this music because we want to share something among the four of us and with the audience. If you’re 10 years old or 80 years old it doesn’t matter. It’s music for everyone. We do laugh about it, because when we decided on ‘Nevermind,’ of course it was also a joke.

MT: It’s also the title of Nirvana’s second studio album. [The album cover has a photo of a young child swimming in a pool]

AB: [laughing] OK, you know it. We were thinking that for our first album we would have a photo of the four of us in a swimming pool. But maybe not.

Supported by engagingly, yet simple staging by Cara Consilvio, a well-prepared cast of singers told the archetypal story of Cinderella with charm and flair. Framing the production was  a sparse but colorful set and wonderful lighting by Dave Brooks. END_OF_DOCUMENT_TOKEN_TO_BE_REPLACED

END_OF_DOCUMENT_TOKEN_TO_BE_REPLACED

The music isn’t easy to play, either. Over the course of two hours, all of the musicians brought fantastic focus to the unrelenting tricky rhythms and countless layers of parts, all of which require a high level of individual responsibility. Even in the moments of calm, the accompaniment remains perpetually unsettled. Adams — who made a sprightly presence on the podium — combines minimalist, repeating motives in gradual layers, which eventually become so dense they overwhelm the senses. Lisa Wong deserves special mention for her thorough preparation of the Cleveland Orchestra Chorus, as does Jennifer Rozsa for the Children’s Chorus, which made a brief but memorable appearance in the last few minutes. END_OF_DOCUMENT_TOKEN_TO_BE_REPLACED