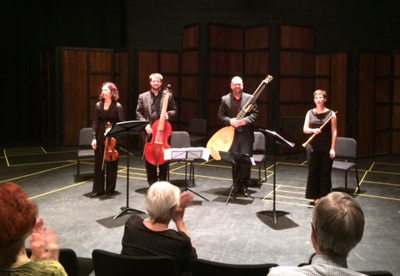 On Thursday the distinguished Cleveland-based group Les Délices, which specializes in French music of the 18th century, gave the first concert in this year’s Signature Series at Lorain County Community College’s Cirigliano Theater. With this performance, the series, which is curated by LCCC Distinguished Professor and composer Jeffrey Mumford and mostly presents new music, took a plunge into early music. Lully is a far cry from Ligeti, but maybe baroque is the new avant-garde?

It is the scholarly research and eminent musicality of oboist Debra Nagy, founder of Les Délices, that mines and polishes these oft-forgotten gems of the French baroque. Her supple playing gives them soul; her lilt brings spark; her legato makes them sing. In this program, as often, she was joined by the remarkable Cleveland violinist Julie Andrijeski, whose every gesture seems imbued with the expressiveness of baroque dance (of which she is also an accomplished performer). The excellent continuo consisted of David Ellis (bass viola da gamba), whose flexible and passionate bass lines pumped a formidable energy into these suites, and Simon Martyn-Ellis (theorbo), an inventive musician whose nuanced accompaniment was a joy to listen to.

The program was wittily called Toutes Suites (“all suites,” and also “do it now!”). As Nagy pointed out in her program notes, these are not your usual “Allemande — Courante — Sarabande — Minuet — Gigue” suites. The French, with a nod to the dance forms, named these eclectic collections “suites,” but the results are far from mere dance music. Here we encounter powerful preludes and fantasies full of irregularities that no baroque dancer would want to foot; virtuoso gavottes that test instrumentalists’ mettle and leave the dance floor far behind; and extended chaconnes and passacailles that explode the expectations of the simple variation-on-a-ground-bass structure.

To start the concert, a suite of four movements by Jean-Baptiste Lully set a mood of courtly elegance. The music itself, composed “pour le coucher du Roy” (“to put the king to bed”), was pleasantly varied, as was the performance — especially the concluding chaconne, in which one affect subtly moved into another as the variations followed one another. No doubt the king enjoyed his dreams the night this was played.

The next piece, called Sonata but manifestly a suite of dances, would not have been as welcome in the royal bedchamber, and presumably was not so intended. Composed by the violinist Jean-Baptiste Senaillé, these movements were virtuosic opportunities for the violinist and gambist (the oboist sat this dance out). The Prelude was especially notable for its pulsing expressivity, matched well to the “tragic” key of g minor.

The longest suite in the program, by François Couperin, was also the most self-consciously heterogeneous. Sporting an Italian title (Il Ritratto dell’Amore — “the portrait of love”) and appropriately loaded with Italian flamboyance, the suite’s eight movements nonetheless have French titles that place it in the galante style of the French court. The titles clue us in to a variety of amorous qualities, such as La Charme (“charm” — graceful and lilting), L’enjoüement (“pleasure” — rather more emphatically excited), and La noble fierté (“poise” — balanced and dignified). And how more French could one get than a sassy movement called “Le je ne sais quoi”? The suite, composed in E for a single solo voice and continuo, was here played in an arrangement by Nagy that was transposed to the baroque-oboe-friendly key of D and featured the addition of a middle line for the violin.

Simon Martyn-Ellis and her theorbo took center stage for a solo performance of a short Prelude and Chaconne by Robert de Visée, guitarist for Kings Louis XIV and XV. Martyn-Ellis’s rendition was intimate and engaging, and it was a pleasure to hear the theorbo, that fascinating extended version of the lute, by itself.

The most profound piece on the program came last, a suite in g minor from the Pieces en trio by Marin Marais, played by all four instrumentalists. Here was where we really heard Nagy’s thesis that the French used the suite form to develop a much more intricate music than actual dance forms allowed. Marais’ movements show their “dancey origins” but clearly transcend them with lots of rhythmic and harmonic turns. As in the Couperin, the Marais evokes great variety; but in the latter, this variety comes across as more than just the contrast between parts of the suite: one feels that a complex set of emotions is present within a single movement.

The finale, a passacaille (like the chaconne, a set of variations over a ground bass), is an unusually long piece for its time and is remarkable for its daring shifts of affect. The piece seems always in motion, and always a different kind of motion. Jumping, scurrying, slithering, twining, and striding — it was a stirring end to the program.

A sizeable and appreciative audience was on hand to welcome Les Délices in Cirigliano Theater, a setting intimate in scale and appropriate to chamber music. As a black-box theater, it is a little short on visual charm and acoustic resonance, but the studio is a convenient and flexible space, and those of us on the far west side are delighted to have a concert series there.

Once again, Les Délices has put together a program of highly enjoyable music, well-researched and compellingly performed. Les Délices’s four-program subscription series begins with concerts on November 7 and 8.

Music director and conductor Daniel Meyer built his playlist around Cleveland themes and scenes. “Exploration CLE” made use of engaging selections from the classical canon and beyond that celebrated “what makes Cleveland so special.” Happily, he and his musicians avoided constructing a visual slide show, choosing to let the music speak for itself. END_OF_DOCUMENT_TOKEN_TO_BE_REPLACED

You could see the relationship at work on a practical level. Repertoire for two players at the same piano requires a certain choreography. There’s just one of each pedal to share, and the hand crossings left and right — which can be so fun to watch a soloist pull off — get more complicated when another person’s involved. At times, Pompa-Baldi drew a hand away from the keyboard and into his body, making room for Friscioni, and at the close of a few delicate phrases, the two were crouched together over the same final notes at one end of the instrument. END_OF_DOCUMENT_TOKEN_TO_BE_REPLACED

The signature sounds of these famous film scores are not so much John Williams’ invention as allusions to other classical pieces. The foreboding half-step from Jaws, growing more and more furious in the cellos and basses, shares something with Dvořák’s “New World” Symphony and Bartok’s Miraculous Mandarin. END_OF_DOCUMENT_TOKEN_TO_BE_REPLACED