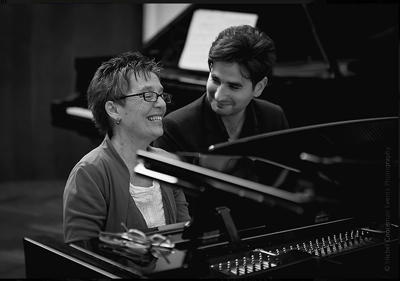 In 2012, after nearly 60 years of concertizing, Portuguese-born concert pianist Maria João Pires cut back on her performances but embarked on a new career as a mentor of young pianists at the Queen Elisabeth Music Chapel in Waterloo, Belgium.

On Thursday, March 10 in Reinberger Chamber Music Hall at Severance Hall, Pires will join 29-year-old French pianist Julien Brocal for a recital in her Partitura Project, a program designed to create opportunities for young musicians to share the concert platform with well-known artists.

Julien Brocal, a native of Arles, began playing the piano at the age of 5, and concertizing at the age of 7. After completing studies at the Conservatoire National de Région de Marseille and at the École Normale de Musique de Paris Alfred Cortot, he was “spotted” in January of 2013 by Maria João Pires during a workshop at the Cité de la musique in Paris, and invited to further his studies at the Queen Elisabeth Music Chapel.

On the eve of his first visit to the United States, we reached Julien by Skype in Brussels to ask about the Queen Elisabeth Music Chapel and the Partitura Project.

Daniel Hathaway: Tell me about your first meeting with Maria João Pires.

Julien Brocal: She held an Academy in Paris and I was one of nine musicians she selected to participate in the workshop. I can say that I completely had a crush on her. I hadn’t had such emotion for an artist since I started studying music. It was very inspiring for me. Maria invited me to Belgium, where she had just started the Queen Elisabeth Music Chapel, to take part in the birth of the Partitura Project. So I was in from the very beginning. We built the program together three years ago with that group of musicians.

DH: How does the Chapel operate?

JB: It’s a residency situation for young artists at the beginning of their careers. It has a very good infrastructure — good pianos, good studios, and they take care of all the logistics. We even have a restaurant. It’s not like a university with academic obligations. It’s just a place where you can focus on your work and what you want to do. There are very few musicians around, but there are violinists, cellists, and singers, mainly soloists. We have exchanges together. We play chamber music, we made a tour to India together, and we organize cruises where young musicians perform with older musicians. It was a very nice opportunity for me after I finished my studies in Paris.

What was interesting from the very beginning is that Maria didn’t behave like a master to a student. She is like a colleague to us. Of course she is still the master, but the transmission can take place more easily this way. There are no lessons. It’s more like sharing experiences. It’s not a traditional master class where the master says something and everybody has to listen. We have debates with the people who are playing and exchange thoughts with them. The main idea is that we gain from each other. Music is renewing itself all the time. Society is changing, people are changing, instruments are changing. We don’t play Bach the same way as we did in the past. It’s another way of transmitting knowledge.

DH: It’s easy to tell from the photo that you have a special, informal relationship with Maria.

JB: It’s a very friendly relationship, like colleagues. That makes it more comfortable when we share the stage together. She’s a huge star, but she doesn’t act like it. She tries to make us feel confident.

DH: Tell me about your Cleveland program. It was originally all Beethoven sonatas, but you’ve changed it.

JB: We decided to change it when I discovered that Ravel had spent four days in Cleveland in 1928 during his four-month tour to America, which was very inspiring. It was a big success for him at the top of his career. It’s my debut in America, so I had the idea of playing Ravel’s music, especially the Sonatine that he performed during his tour. He wrote Miroirs at the same time, just like he did the two concertos. Maria will play the last two Beethoven sonatas, which express what Beethoven thought the music of the future would be. It is meaningful for me to mix Beethoven and Ravel together.

DH: And you and Maria will be playing a four-hand piece together as well.

JB: Yes. We found Ravel’s transcription of Debussy’s Afternoon of a Faun. Ravel said he wanted that piece to be played at his funeral. The piece has deep meaning for us.

DH: Changing the subject, I’m curious about the climate in France at the moment, following the terrorist attacks?

JB: There’s a lot of tension in Paris. It’s very complicated politically. The policy failures of the last 40 years are being experienced now, and people don’t feel safe. The terrorists attacked our freedom and creativity, so we musicians have to fight back with what we do best: continuing to create and share music. It’s very inspiring for our work. (Watch a short video of Julien Brocal’s musical tribute to the victims of the terrorist attacks in France here.)

DH: What are you most curious about on the eve of your first trip to the United States?

JB: I try not to have too many expectations when I go to a new country. I want to start by experiencing things and then go a bit further where I feel I should discover more. It’s a short trip: Cleveland on March 9th, then Middlebury on the 12th. I don’t know anything about the places I’ll visit, but I plan to enjoy what happens in the moment.