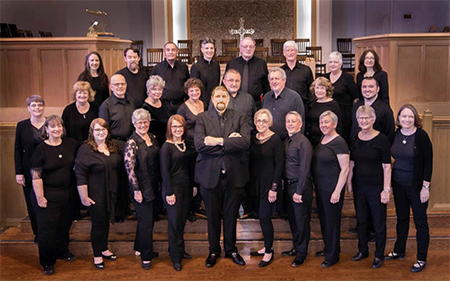 “Greatness,” as a measure of artistic merit, has a fatal flaw: experts and enthusiasts have to will it into existence. As with a ship’s christening, conferral requires masters of ceremonies, an assenting crowd, a suspension of disbelief, and an intoxicant: in this case, a love of the art form. Bias seeps in all too easily. In the past, some denied that entire groups of artists, such as composers who were women, could ever achieve greatness — a falsehood long since aged to unpalatable bitterness. Good Company: A Vocal Ensemble, joining forces with Amethyst Strings and Windsong, focused on versatility, variety, and vastness of vision in a recent concert of music by women. Together, the groups decanted diverse vintages, finding greatness by the barrel.

The program on Sunday, November 10 at Lakewood Presbyterian Church could have used a trim. Sunset came, went, and receded into memory over the performance’s two hours. Even this, however, helped the massed ensembles make their case: women have been producing reams of good music since the idea of writing music down emerged over 1,000 years ago.

Fiery material for violinist Mary Beth Ions and Good Company accompanist Ruth Draper brought Joan Szymko’s Be It Therefore Resolved to life. Impassioned conducting from Director Michael Carney lent a steely resoluteness to the piece, an affirmation of values of decency and positivity. Cellist Kent Collier emerged from the group texture, capacious sound and all, near the end.

Ethel Smyth’s March of the Women, laced with subtleties despite its purpose as a protest anthem, trundled along until Draper led the transition into Jena Root’s A Life Summed Up, designed as a companion piece. Flowing, overlapping lines for full chorus on words from Smyth’s personal diaries offered a musical as well as a textual contrast.

Hildegard von Bingen’s O Virtus Sapientiae unfolded over a drone, floating serenely, except in moments when the tenors, more used to minor scales than to the Medieval Abbess’s Phrygian mode, sounded uncertain. Draper migrated to the harpsichord for Isabella Leonarda’s Domine ad Adiuvandum, which opened with the strength necessary to counterbalance the intricacy of later fugue sections.

Lili Boulanger’s Psalm XXIV represented a program highlight, with Draper up in the organ loft and percussionist Evan Mitchell at the timpani. Gwyneth Walker’s arrangement of the spiritual Motherless Child gave soloist Amy Collins a moment to shine. Ysaye Barnwell’s Wanting Memories offered grooves and featured Windsong, Cleveland’s feminist chorus, as a source of melodic drive. Szymko’s Gamba Adisa, an ode to Audre Lorde, features something of the late poet’s energy, but lacks any trace of her critical edge and nuance.

The second half began with a cello solo for Collier and a mysterious piano figure for Draper in Szymko’s Always Coming Home, bolstered with another appearance by Windsong. Good Company vocalist Jennifer L. Scolnick’s Aware, worthy of many future performances, made its world premiere back-to-back with that of November Night, Draper’s compositional contribution.

Chen Yi’s The Flowing Stream seemed an odd fit for the ensemble: its melodies lay too high for all sections, and the singers had to pronounce Chinese text phonetically. Sarah Quartel’s Sing, My Child featured Mitchell on propulsive hand drum. As though Draper had not demonstrated mastery of enough instruments yet, Billie Holiday’s God Bless the Child featured her on electric bass.

The sopranos took on a lovely tone in Emma Lou Diemer’s Take, Oh Take Those Lips Away/O Mistress Mine, a setting of two Shakespeare excerpts, and Alice Parker’s Together introduced vocal percussion into the proceedings. An impressive swell of harmony helped make the poetry of Wendell Berry feel contemporary in The Peace of Wild Things, and Szymko’s It Takes a Village, featuring Windsong, plus Mitchell on djembe, made an iconic saying into a communal event all its own.