The Sinfonia from J.S. Bach’s Partita No. 2 in c was not only a striking introduction to the evening, but it provided an early glimpse into several virtues of Feuillâtre’s playing: his expressivity, his light touch and sense of flow, and his nimble technique.

He continued with more Baroque: Weiss’s Lute Sonata V in G, arranged by Roman Viazovskiy. Feuillâtre’s keen sense of structure came through in the five dance movements, each one unique in tempo and mood, while at the same time slotting in gracefully with its surroundings. A standout was the Sarabande, not just for its unmistakable beauty, but for the subtle way that Feuillâtre conjured that beauty. You got the sense that he’s not worried about grabbing the audience’s attention — he understands that if he simply does what he does, we’ll come to him.

Feuillâtre made a strong case for the music of Sérgio Assad in two short works, both of which harness an energy that’s somehow both manic and placid. The bewitching Eli’s Portrait arrives at that energy via a brooding opening, while the “Caterete” from Suite Brasileira No. 4 simply begins with it, before channeling that spirit into something fun and playful, and eventually quite virtuosic. 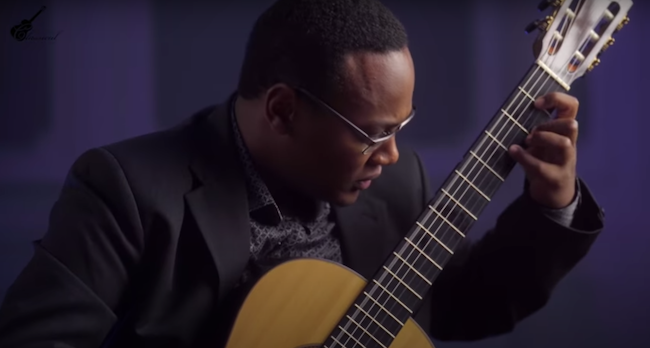 Among the three preludes from the Romantic era — the latter two in arrangements by Antoine Fougeray — Villa-Lobos’ “Homenagem ao Vida Social” was gorgeous, especially in Feuillâtre’s slightly brisk tempo. He seemed to relish the emotional murkiness of Scriabin’s Op. 9, No. 1 (“For the Left Hand”), though that quality made Rachmaninoff’s Op. 23, No. 5 stick out in comparison as a bit superficial.

The finale, Roland Dyens’ “Clown Down” from Triaela, is a show-stopper — constantly in motion and full of anticipation, with moments that really pop. As a bonus, it comes with an abundance of fun sounds, from percussive slaps to vigorous strumming and radical bending of pitches into perfectly ugly territory.

It’s probably true that Feuillâtre would like to take back a few moments from the performance — little mishaps of technique and articulation — but it was easy to look past those considering his consistently stunning musicality. Plus, it only made clear that this was about as live as a pre-made stream can get — not recorded over and over to get the “best” take. This was genuine musical communication happening in the moment, even if that moment occurred later for us than it did for him.

After the recital came excerpts of Feuillâtre’s Zoom meetings with Guitar Society students. We heard a little bit of his playing, a little bit of theirs, and a little bit of Q&A — including one question from a real straight shooter. “How do you pronounce your last name?”

Feuillâtre laughed. “All the American people I’ve met ask me this question.”