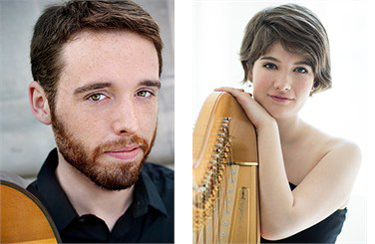 “Guitar and harp is such a rare, unique combination,” said guitarist Colin Davin in a recent conversation. “To the extent that there’s an epicenter for that kind of duo, it might be Cleveland. Jason Vieaux and Yolanda Kondonassis have performed and recorded an album together, and in the past few years, some of the students here have formed guitar and harp duos. We like to think we’re starting something that will catch on.”

On Sunday, June 11 at 7:30 pm in the Cleveland Institute of Music’s Mixon Hall, Colin Davin and harpist Emily Levin will close out the 2017 Cleveland International Classical Guitar Festival with a duo recital featuring a world premiere by Dylan Mattingly and a recent work by Will Stackpole, with the Duo’s own arrangements of works by Maurice Ravel and Manuel de Falla as bookends.

Davin’s debut solo recording, The Infinite Fabric of Dreams, was praised by American Record Guide as “achingly beautiful…a thoughtful, perceptive interpretation, filled with details often missed.” He teaches at CIM and Baldwin Wallace Conservatory. Emily Levin, principal harp of the Dallas Symphony, is the youngest to hold that position in a major American orchestra. She was the Bronze Medal Winner of the 9th USA International Harp Competition.

Davin, a Bay Village native, picked up the phone in Cleveland, where he’s now lived since November. I started off our conversation by asking him what it’s like to be back?

“Living in Cleveland again has been a really cool experience,” he said. “I left in 2005 to go to college in Los Angeles, and I’d only visited since then. The city has changed quite a lot — it’s really grown and gone through this boom — so it still has the comfort of home, but a little more excitement, too.”

Davin said he and Levin largely drew on the original, piano-four-hands version of Ravel’s Mother Goose Suite for their arrangement. “We started out thinking of the natural connections there — instruments with strings, whose sounds decay — so it was a really easy philosophical translation. But it didn’t always neatly work out that I would be one of the pianists and she’d be the other. There were some interesting times where we had to twist things a little bit, or come up with some of our own ideas to piece the puzzle together. It was fun.”

Asked who would take which role in the fourth movement, Les entretiens de la belle et de la bête, Davin laughed. “I’m contractually obligated not to say who is Beauty and who is Beast. I guess I would say that all of us have a little bit of both inside.”

They’ll follow with Will Stackpole’s Banter, Bicker, Breathe (2016), a piece which played an important role in the Duo’s formation. Levin helped Stackpole produce Focal Point New Music, a concert series that connects composers with instruments that are underrepresented in new music. “They did a whole concert of chamber music with harp where she and I premiered Banter, Bicker, Breathe, as well as a piece for guitar, harp, and oboe,” said Davin. “It was a wonderful program with great, interesting music. And it confirmed what Emily and I thought might be the case — that with like-minded musicians who are good friends, it usually works out into a good collaboration.”

Time pressures sped their process along. “We both were leaving New York around the same time  — she got the job in the Dallas Symphony just as I was contemplating moving here to be more committed to teaching. So as we were anticipating not being in the same city, we really buckled down, put together a program, and hammered out the arrangements. We played a house concert in New York and gave a small tour of Colorado, where coincidentally we were both going to be over the summer. That founded the Duo.”

Davin said he and Levin have enjoyed digging into the character of Stackpole’s piece. “It depicts a day within a relationship — the tension, the playfulness that becomes a little bit aggressive sometimes, and then finally exhaling. The conclusion is very settling, tender, and beautiful.”

I asked Davin about the world premiere of Dylan Mattingly’s La Vita Nuova (and other consequences of Spring). “Dylan’s this brilliant composer, cellist, and classics scholar. I’ve always enjoyed talking with him and hearing his music. When Emily and I were looking for another composer, I pushed hard for him.”

In his insightful program notes, Davin writes that La Vita Nuova is drawn from Dante Alighieri’s exploration of love — romantic, courtly, and divine — through the lens of Dante’s own lifelong unrequited love for Béatrice Portinari. In conversation, he added that the piece’s complicated, mathematically structured polyrhythms have the effect of a beautiful swirl of sounds.

The guitarist said his inspiration for arranging the 1925 version of de Falla’s El Amor Brujo came from William Kanengiser, his teacher at the University of Southern California and a member of the Los Angeles Guitar Quartet. “They have an arrangement of this piece in its entirety, and I was so struck by the beauty and magic and power of their performance. I thought to myself, ‘I’d love to do this, but I don’t have a guitar quartet.’ So I started playing with the idea of arranging it for harp and guitar.

“This arrangement is basically a summary of what’s so great about this duo — the harp brings an orchestral range and resonance and has its own special effects and colors, while the guitar has more of an articulate edge to its sound, and of course we can bring in the rasgueado and various Spanish flamenco-inspired sounds. It was just a fantastic experience to translate the full orchestral score to our plucked instruments.” Click here to watch Davin’s and Levin’s mesmerizing performance of Canción del fuego fatuo (“Song of the will-o’-the-wisp”) from de Falla’s great ballet.

To close our conversation, Davin told me about his trip to Dubai last summer to play a solo recital. “I mined some connections from my teaching residency at the Afghanistan National Institute of Music and set up a concert at this hip warehouse venue called The Fridge. They had me play on a morning talk show that was all in Arabic, and there was one producer whose job was to point to me when I should start. So I just sat there with no idea what was going on, watched my guy, and played. It was a fun experience.”

END_OF_DOCUMENT_TOKEN_TO_BE_REPLACED

Then, you heard all the qualities that make for a stunning soloist. Winner of the 2013 Cleveland International Piano Competition, Khristenko was back in town this month for a recital in Piano Cleveland’s summer series, Piano Days @CLE. And he couldn’t help but revel in the spotlight a little, even as he settled into a more collaborative role at the keyboard for his program, “Stanislav and Friends.” END_OF_DOCUMENT_TOKEN_TO_BE_REPLACED

Now, both pieces on Saturday might be called one thing, but they really sound like another. “Symphony” is a title that would fit Sergei Rachmaninoff’s Piano Concerto No. 2, as well as John Adams’ modern masterpiece for orchestra, Harmonielehre. END_OF_DOCUMENT_TOKEN_TO_BE_REPLACED

And the Orpheus effect has everything to do with who’s not onstage. The New York City-based group has rehearsed and performed without a conductor since its founding in 1972, and this means its members share the musical authority that typically rests with one person. Multiplied by a dozen or so, the interpretation of a piece suddenly emanates from every player, from the concertmaster to the double bass, resonating with a kind of collective power. END_OF_DOCUMENT_TOKEN_TO_BE_REPLACED