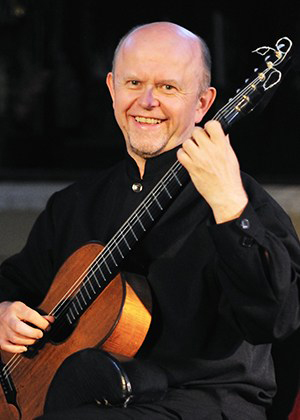 The 2015 edition of the Cleveland International Classical Guitar Festival will wrap up on Sunday, May 31 at 7:30 pm in Mixon Hall at the Cleveland Institute of Music with a recital by Pavel Steidl. We reached him by telephone at his home near Prague.

Mike Telin: You’re returning to the Festival this year with an interesting program, the Bohemian Aristocrats. Where did you get the idea to put it together?

PS: I had been playing the music of Jan Antonín Losy for some time. He was an important aristocrat whose passion was the lute and probably one of the best improvisers of that time. He also supported many other artists.

When I left Czechoslovakia at the beginning of 1987 — I defected, you know, and received political asylum in Holland — I took one book with me, and that was “The Music of Bohemian Aristocrats.” It was an edition of Bohemian lute tabulatures, but as I read through that music, I began to understand its style more and more. It’s not Bach, I have to say! But it’s music that’s written in the style gallante, so it’s kind of a combination of the Italian and French styles. I like these pieces, and I hope the public will like them. And, by the way, the music of these Bohemian Aristocrats was not written as suites, they were intended to be played as solo pieces.

MT: I’ve learned a lot about Bohemia from reading the program notes. And of course I know that Janáček was Bohemian, but I wouldn’t recognize “Losy” as a Bohemian name.

PS: He was born in Bohemia, but I believe his parents came from Switzerland.

PS: (Laughs) That’s really very interesting. I had never heard of him until about ten years ago when I was playing at the Hochscule für Musik in Innsbruck. There was an old teacher, a lady, who often went to Peru, and she brought me 100 minuets by Tirado. This winter I finally got the time to study them. It’s very nice music. The lady told me that it’s in the style of Fernando Sor, but for me, it’s more Italian, a little bit like Paganini.

MT: How does Tirado’s music fit into the theme of Bohemia?

PS: I think it fits the style of the other pieces.

MT: Is the same true of Napoleon Coste?

PS: Yes, but the Coste is really different. It’s in the French style and I think it’s nice to put it after the short pieces. They make a kind of suite together. The Coste was originally written for the guitar, and I’m not really adding any notes.

MT: You’re playing Jana Obrovka’s “Hommage a chorale Gothique? You’ve written your own “Hommage” to Jana. Can you tell me a bit about her piece?

PS: When I was a student at the Prague Conservatory my teacher was Milan Zelenka, the husband of Jana Obrovka. She was a marvelous person, and next to Leo Brouwer, one of the most important composers for the guitar at that time. She won the Radio France competition with her compositions, and her collaboration with her husband was very successful. They composed together because Milan always helped her to write for the guitar. She did not play guitar, but was a wonderful musician and understood the instrument very well. She was also one of the most important people that I had the honor to meet and to work with. She composed her Hommage a choral Gothique in 1974 or 1975, and I heard its premiere in the beautiful hall of the Rudolfinum.

At that time, I didn’t know either Zelenka or Obrovka. But I met them two years later, and that was the beginning of a very nice friendship. When I left Czechoslovakia in 1987, one of the last people I said goodbye to was Jana Obrovka. I knew that she was already very ill at the time, and a month later I got a message in Holland that she had died.

PS: When I speak about the brain, the soul, and the body, these three elements must always work together. These are the words of my dear firend Carlo Domenicioni. Carlo once said something very beautiful about this composition: He said that Jimi Hendrix was a musician who had his legs on the ground and his head in the universe. And it’s true!

MT: You’re also interspersing the program with pieces by Janáček.

PS: They’re transcriptions of pieces that were originally written for the harmonium. Last Tuesday, I was playing some of them on Cimbalom, and they sound very beautiful and impressionistic. They’re all from a cycle called The Overgrown Path.

MT: I like the positioning of Janáček’s “Good Night,” which is not only the last piece on your recital, but also the final work at this years Festival. Thank you for speaking with me.

PS: Thank you so much. I am looking forward to coming to Cleveland again.

Published on ClevelandClassical.com May 28, 2015.

END_OF_DOCUMENT_TOKEN_TO_BE_REPLACED

Rodgers & Hammerstein’s Cinderella was originally produced for television in 1957 — seven years after the animated Disney film was released — and starred Julie Andrews. According to the Rodgers & Hammerstein website, it was viewed by over 100 million people. END_OF_DOCUMENT_TOKEN_TO_BE_REPLACED

The story line has its origin in an 1855 play and an 1842 farce that Thornton Wilder mined for his 1938 play The Merchant of Yonkers. When that turned out to be a flop, in 1954 Wilder made the crucial decision to re-center the show around the character of the legendary marriage broker Dolly Gallagher Levi and renamed it The Matchmaker. END_OF_DOCUMENT_TOKEN_TO_BE_REPLACED

The Dodero Center for the Performing Arts at the Gilmore Academy in Gates Mills is one feature of an impressive campus. The auditorium is shallow, the stage is deep, and the ensemble played without a shell. Throughout the program, the sound, especially in instruments’ lower registers, tended to disappear. END_OF_DOCUMENT_TOKEN_TO_BE_REPLACED