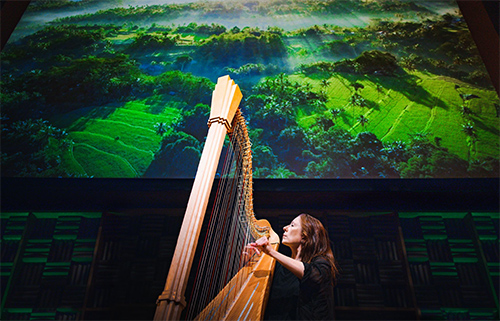 “When we see an idea expressed in the language of art, our sensory reactions often open the heart and mind to interaction in ways that mere facts may not,” writes the celebrated harpist Yolanda Kondonassis, who is the founder and director of the Earth at Heart foundation. “Action is the goal, but a visceral call to engagement can be the catalyst. There is not a minute to lose in our battle to protect the future of our planet, and an inspired commitment can make all the difference.”

On October 23 in Gartner Auditorium at the Cleveland Museum of Art, Kondonassis gave the world premiere of the fifteen works on her latest album, Five Minutes for Earth, as well as two never-before-heard compositions by Steven Mark Kohn and the legendary  jazz artist and composer Arturo Sandoval. That’s seventeen premieres in a single evening.

Each composition ran about five minutes in length, and demonstrated the meditative quality of the harp, and its capacity to transport a listener into reflection. Kondonassis, and the guest performers, were accompanied by atmospheric videos by Jared Hall.

After talking about her mission for the album and the concert, Kondonassis displayed artworks by high schoolers from the Cleveland area. The artwork was created as a pictorial representation of how and why we should care for the earth. Each image was unique and very moving.

Kondonassis used a variety of techniques in the compositions  —  shifting the tuning pedals while the sound of the vibrating strings faded — to the use of a conductor’s baton hitting and scraping against the strings.

In Michael Daugherty’s Hear the Dust Blow, Kondonassis swiped her fingers up the string to produce a sharp whispering sound as if from an infant animal.

Guest harpist Juan Riveros, who performed on a live broadcast feed from his home, gave inspired performances of Stephen Hartke’s Fault Line, and Nathaniel Heyder’s Earthview. The Hartke was scaly, and slipped notes like graces, while the Heyder sparkled and as he grazed his fingers over the short strings and plucked low notes as if picking them off the ground.

Other guest performers included Grace Roepke, who played Patrick Harlin’s descending Time Lapse, and Ina McCormack, who performed Philip Maneval’s arhythmic and limping The Demise of Shepherd Glacier, which descends brilliantly and flows out on the sea slowly melting. Shelly Du presented Gary Schocker’s Memory of Trees, which sounded like an old ballad.

Spoken word was represented by Cleveland Orchestra solo English horn and oboist Robert Walters’ poem Terra Infirma which describes our misery index, the torched past in every silhouette, and new life greening on the other edge.

It was a beautiful evening, albeit a long one. Still, the message of the concert was delivered with love and kindness.