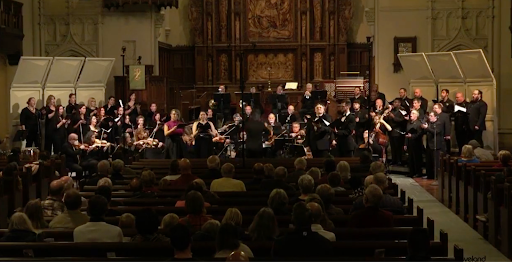 Wonderful things can happen when two accomplished ensembles collaborate. Such was the case on Saturday, October 8, when the Cleveland Chamber Choir and the BlueWater Chamber Orchestra joined forces at the Church of the Covenant in a program titled “Heaven and Earth.” The result was spectacular.

The program featured Gwyneth Walker’s The Golden Harp (1999) and Beethoven’s Mass in C. At first glance the two works appear to have little in common: Walker sets the words of Bengali poet Rabindranath Tagore and Beethoven sets the text of the Latin mass. Still, the colorful, expressive music in each provides a directness to the text that takes the listener on an emotional journey.

During her eight-movement work, Walker’s use of simple rhythmic gestures underscores the words of Tagore’s poetry. A jaunty bass line opens the piece while the choir gleefully announces, “I am here to sing three songs.” Walker’s evocative, lush choral writing is prominent in “This is My Prayer.” In the concluding “In One Salutation to Thee,” long, robust orchestral chords underpin the music’s full-bodied vocal lines. Throughout, the Cleveland Chamber Choir sang with clear diction, spot-on intonation, a velvety blend, and a full range of dynamics that filled the space.

Soprano Julie Myers-Pruchenski impressed with her clear, attractive tone during “Light, My Light” and “Death, My Death, Come and Whisper to Me,” while tenor William Hamilton brought a pensive aura to “Mother, I Shall Weave a Chain of Pearls….”

The strings of BlueWater played with precision, and Ideastream Public Media’s John Mills’ dramatic narration of Tagore’s poetry — interspersed between each movement — was a silk thread that tied the piece together. Under the skillful direction of Gregory Ristow, the performance was mesmerizing.

It’s true that Beethoven’s Mass in C has never garnered the popularity of his Missa Solemnis. But hearing the glorious performance by the chorus, orchestra, and soloists — now under the direction of Daniel Meyer —  one could only wonder why the piece still lives in the shadows of its sibling. Throughout, Meyer’s interpretation was never self-indulgent. He kept things moving while still drawing shapely phrases and rhythmic precision from the combined forces of the two ensembles.

The opening Kyrie was ear-catching in its tenderness. The quartet — soprano Anna O’Connell, alto Kira McGirr, tenor William Hamilton, and bass Albert Donze — beautifully wove their lines in and out of the musical texture. The triumphant Gloria invited the audience to sit back and soak up the sound. Following the exuberant Credo, Meyer wisely let the air clear before moving on to the Sanctus. Here, the winds produced a buttery blend in the opening, and the solo quartet brought warmth to the middle section.

The emotional Agnus Dei provided an appropriately quiet, contemplative ending. If only someone could have sat on their hands just a bit longer.

END_OF_DOCUMENT_TOKEN_TO_BE_REPLACED

Supported by engagingly, yet simple staging by Cara Consilvio, a well-prepared cast of singers told the archetypal story of Cinderella with charm and flair. Framing the production was  a sparse but colorful set and wonderful lighting by Dave Brooks. END_OF_DOCUMENT_TOKEN_TO_BE_REPLACED