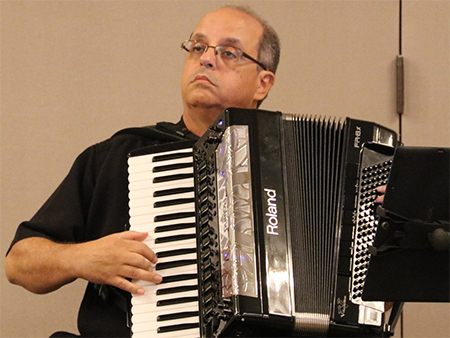 This past week, metropolitan Warren, Ohio played host to the International Digital Electronic Accordion Society. The terrific Friday night concert on November 9 at the Avalon Inn & Resort, part of a symposium, drew world-class professionals from New Zealand, Australia, Italy, Canada, and the United States. The evening opened with an accordion ensemble playing a lively musical mélange. The highlight was composer/accordionist Joseph Natoli’s Smooth. After a slow introduction enlivened by drummer Don Yallech’s cymbal rolls, a fast tango prevailed. An engaging solo featuring Natoli himself (pictured above) raced by. Individual players joined him in parallel thirds, and the result was enthralling.

After California accordionist Richard Noel performed exciting improvisations on In the Mood and offered up a Fiddler on the Roof medley, Natoli returned for a solo set. His rendition of Aaron Copland’s Fanfare for the Common Man displayed the free bass digital accordion’s remarkable orchestral timbres.

Michael Soloway joined Natoli for gentle counterpoint in his short, unpretentious Friendship. (He and Soloway planned and organized the symposium.) The One, a warm tribute in memory of his teacher, Mickey Basilia, had charm and grace, particularly in its use of sequential harmonic progressions.

Natoli adroitly approximated a skillful lead guitar in his arrangement of Mark Slaughter’s Flight of the Angels. Natoli’s Epic Cinematic Soundtrack was an imaginary film score in search of a movie, using sprightly cross rhythms and a surprising array of orchestral effects with percussion. 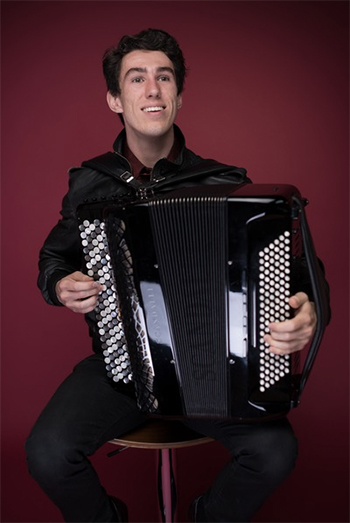 Pesaturo began with an amazing du-wop vocal patch that raced by at a speed worthy of the Swingle Singers. Three Italian Tarantellas followed with similar breakneck virtuosity. He finished with an outstanding, jazzy performance of Bronislaw Kaper’s ever-popular Green Dolphin Street, accompanied skillfully by Yallech.

Speaking with the conductor by phone in Cleveland this past Wednesday, I began our conversation by telling him that I had a wonderful conversation with Stefan Jackiw, who was singing his praises (read the article here). Especially how sensitive the conductor’s ear is with regards to color, which Jackiw noted is quite important in the concerto’s passacaglia. END_OF_DOCUMENT_TOKEN_TO_BE_REPLACED

The music isn’t easy to play, either. Over the course of two hours, all of the musicians brought fantastic focus to the unrelenting tricky rhythms and countless layers of parts, all of which require a high level of individual responsibility. Even in the moments of calm, the accompaniment remains perpetually unsettled. Adams — who made a sprightly presence on the podium — combines minimalist, repeating motives in gradual layers, which eventually become so dense they overwhelm the senses. Lisa Wong deserves special mention for her thorough preparation of the Cleveland Orchestra Chorus, as does Jennifer Rozsa for the Children’s Chorus, which made a brief but memorable appearance in the last few minutes. END_OF_DOCUMENT_TOKEN_TO_BE_REPLACED

Warner was a fitting choice not just symbolically, but also sonically. The combination of Baroque strings, theorbo, harpsichord, and organ created a nice blend and balance, allowing the opportunity for softer instruments to stand out. In Johann Rosenmüller’s Sonata à 5 in g, Doug Balliett’s violone pizzicatos resonated beautifully, and in Johann Heinrich Schmelzer’s Sonata in d, harpsichordist Elliot Figg became an equal player in the texture with his clever improvisations. The slight exception was Joshua Stauffer on theorbo — despite the instrument’s big physical presence on stage, he received little time in the spotlight. END_OF_DOCUMENT_TOKEN_TO_BE_REPLACED