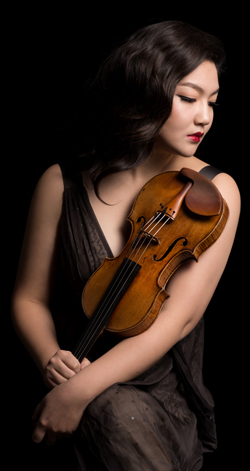 On September 5, thirty-seven young violinists representing fourteen countries began their quest to win the Gold Medal at the Ninth Quadrennial International Violin Competition of Indianapolis. After the field had been narrowed to sixteen contestants, and then to six, on Saturday, September 20 the jury announced that Jinjoo Cho was the winner of the competition’s top prize.

For her accomplishment, Cho was awarded a $30,000 cash prize, international concert engagements including a Carnegie Hall Stern Auditorium recital debut, career management for the next four years and the four-year loan of the 1683 ‘ex-Gingold’ Stradivarius. Cho holds a bachelor’s degree (2011) and a master’s degree (2013) in music performance from the Cleveland Institute of Music. She is currently pursuing Professional Studies at CIM.

“I’m really grateful and honored to have this opportunity,” a very excited JinJoo Cho said during a recent telephone conversation. “I’m actually the second First Prize winner of the competition to have come from CIM. Judith Ingolfsson won it in 1998, so I feel like I am continuing a really great Cleveland legacy. I’m very happy about that.”

For her performance during the preliminary round, Jinjoo Cho chose works by Bach, Mozart, Paganini and Fauré. Was there a strategy behind this decision? “No, I didn’t have a strategy, I wasn’t thinking about that. They’re just pieces that I like,” she said with a laugh, adding that the pieces also met the competition requirements.

During the final round, the six finalists were required to play a Classical concerto with the East Coast Chamber Orchestra, for which she selected Mozart’s Violin Concerto No. 5, K. 219. They were also required to play a Romantic or Post-Romantic concerto with the Indianapolis Symphony. Many found Cho’s choice of Korngold Violin Concerto in D major during the Final round to be an interesting one. “A lot of people have asked why I chose it, but to me it just made sense. Yes, it’s not played as often as some other concertos so there is no pre-decided perception of the piece. And because of that I felt that if I brought some uniqueness to my interpretation, it would be appreciated rather than judged. I also feel like I have a connection to the piece.” Cho said she also liked the idea of challenging herself to play a work with which she was still not 100% comfortable. “It was a big challenge to me and I liked the idea of the challenge.”

Has she had a chance to listen to the recording of her Korngold performance? “Yes,” she says bashfully, “and, oh well, you can never be happy with everything, but I’m glad that people liked it. And, I’m very thankful that the judges appreciated it.”

Then there’s the four-year loan of the 1683 ‘ex-Gingold’ Stradivarius. “I haven’t actually received the violin yet, but I’m eager to find out what it’s like. And to see how it fits with my playing and personality.”

But above all, the opportunity to have four years of concert management that excites her most. “I will now have more opportunities to perform in different places, and this is what I have wanted all of my life. Now I have somebody who will really be helping me to get on the concertizing pyramid.”

The Cleveland Orchestra’s second performance of the new season on Sunday afternoon, October 17 at the newly renamed Mandel Hall at Severance Music Center was just such an occasion. If the ensemble’s return to public concerts under the baton of Franz Welser-Möst wasn’t enough reason to light a bonfire, the Cleveland debut of a new work written for one of the Orchestra’s most popular soloists, and the swan song of one of its longest-serving members added extra fuel to the celebration. END_OF_DOCUMENT_TOKEN_TO_BE_REPLACED

Cleverly, CityMusic’s latest concert led listeners through these changes one step at a time. “Musical Matrix” took transformation as its theme, and each piece on the October 2 program at the Maltz Performing Arts Center (the second of two performances) put its spin on the subject. END_OF_DOCUMENT_TOKEN_TO_BE_REPLACED