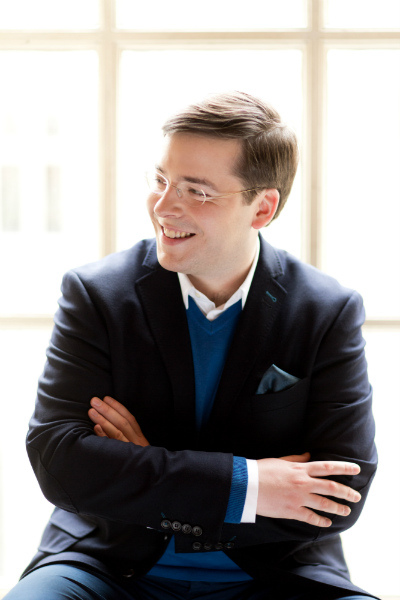 “It feels like a long time, but it’s only been just under two years since I left The Cleveland Orchestra in September of 2013,” former assistant conductor James Feddeck said in a recent telephone conversation. “While it’s been a whirlwind, I’ve had so many wonderful experiences to make music. I think I’ve worked with about forty orchestras during that time, and it’s been inspiring for me to be able to conduct repertoire in all of those different places. But it’s equally exciting to be able to come back to The Cleveland Orchestra. I have to say that I’m really looking forward to this program at Blossom.”

On Saturday, August 15 at 8:00 pm, Dutch violinist Simone Lamsma will join Feddeck and the Orchestra for the Tchaikovsky concerto in a program that begins with Carl Maria von Weber’s Euryanthe Overture and concludes with Jan Sibelius’s Symphony No. 5.

Feddeck said he has not worked with Simone Lamsma before, “although everybody has been saying what a phenomenal job she did filling in for Janine Jansen in the Britten concerto — on very short notice. I’m sure the Tchaikovsky is going to be wonderful.”

The Tchaikovsky certainly qualifies as an old warhorse, but Feddeck admires the piece. “It’s a beautiful concerto and it’s very well constructed, with wonderful pacing of its architecture. But it isn’t merely academic. I think what draws people to it is its many beautiful melodies and its constant sense of singing. Of course, it’s marvelous to hear such a display of virtuosity from the violin. That naturally excites people, too.”

Feddeck realizes that he and Lamsma have an interpretational challenge ahead of them. “With such an often-performed concerto, it can be tricky to make it live up to people’s expectations. Many times, the audience may come to a performance thinking, ‘OK, here’s another Tchaikovsky,’ or they think about a performance they’ve heard by so-and-so. But I do think it’s a timeless work.”

Having programmed such a well-known piece, James Feddeck has the opportunity to fill out the program with less-frequently performed repertoire. “How often do you hear Weber’s Euryanthe Overture? That is one of my favorites. And I thought that the Sibelius symphony would be a perfect piece for Blossom. It’s a great occasion to experience nature in every way, both through music and through the beautiful venue.”

Over time, Feddeck thinks that audiences have grown to have a deeper understanding of the music of Sibelius. “And orchestras are now willing to go for more of the edginess that his music requires. Of course, his moodiness — all those very quick shifts in character — is part of the emotional power of his music. In my opinion, the last movement is one of the greatest moments in all of music.”

During the past year, James Feddeck has conducted twice in Finland: in Helsinki and Tampere. “It was my first trip ever to Finland. The country has such a singular natural beauty, and the people share a unique sensibility that Sibelius was able to capture in his music.” 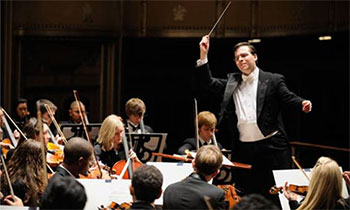 The opportunity to conduct the Helsinki Philharmonic came about when Robert Spano was forced to withdraw, and is emblematic of how Feddeck’s career has developed since he left Cleveland: he has become one of the go-to conductors when cancellations occur.

He recalled finding out he was going to Helsinki. “I was in the dentist’s chair when my phone rang, and kept ringing, so I thought I’d better answer it. I did, and was told that I was booked on a flight in a few hours. Could I make it? I told them I was at the dentist — who was a little annoyed — but I said, ‘I have to leave for Europe in about four hours, so we’re almost done, aren’t we?’ So I went, and it was wonderful.”

By now, Feddeck has gotten used to keeping a bag packed to jet off somewhere on very short notice. “My favorite example happened early on Easter morning of 2014. I got a call asking if I would like to go to Scotland. I said that would be great; would that be next year sometime? They said, ‘No, the flight is in three hours.’

“This past February, the same thing happened. I got a call at 11 a.m. asking me if I would like to conduct Beethoven 5 with the Halle Orchestra. I said, ‘Wow, that’s phenomenal!’ In that case, the flight was leaving in an hour and a half. But the best one was last April. I was in Vancouver when the phone rang and I was invited to conduct three performances of Bruckner 8 with the San Francisco Symphony. How could I say no to that?”

Feddeck said that all of these substitution opportunities have played a significant role in the development of his career. Next season, he looks forward to the twenty scheduled weeks that are already on his calendar, including appearances with the Chicago Symphony, the Minnesota Orchestra, the RTÉ National Symphony Orchestra in Dublin, and the Lausanne Chamber Orchestra in Switzerland, as well as appearances in the Czech Republic and Berlin. “It’s been great fun not only to have planned things to look forward to, but also to have these wonderful surprises sprinkled in. I’ve been very fortunate that it’s all gone so well, and all the orchestras in these cancellation situations have invited me to return for planned appearances.”

Through all of this, Feddeck said he has learned a lot about himself. “My time in Cleveland was absolutely wonderful in terms of really getting to spend time with such a great orchestra, as well as getting to hear top-level guest artists. And the Cleveland Orchestra Youth Orchestra was a fantastic experience for me. I still marvel at how much we accomplished in four short years, including the first international tour.”

But he said that eventually a conductor has to get out and practice his craft. “As an artist, when your definition of who you are is entirely based on yourself, and not through an association with anyone else, it really becomes a new kind of growing experience. When you stand in front of an orchestra you’ve never worked with before, you have to quickly establish a relationship together. And I’ve learned what the best process of doing that is for me. I was very well prepared for those situations through my position in Cleveland, but again, the most important thing is to just do it. And one does figure out very quickly how and how not to do things.

“When you’re a staff conductor with a brilliant orchestra like Cleveland, there is a safety net, because if something doesn’t go as you had hoped, the orchestra will cover it for you because you have a relationship with them that extends beyond one week. But when you have only three to five days to make something happen, the situation is very different. That’s been the exciting thing for me.”

James Feddeck returned to Cleveland in April to conduct the Orchestra at the neighborhood community concert during the Broadway-Slavic Village Residency. “It was wonderful to come back to an orchestra that I know so well and love and respect so much. And after all I’ve done in the last two years, it was a very deep experience. I’m very excited to return again this week, because it is very much about renewing a positive relationship, and revisiting such a positive environment for music-making. We know each other from years of all kinds of projects, and although nothing is ever spoken, each time we see each other the relationship builds even further. I can only imagine how fulfilling it must be for a conductor who has decades of relationships with orchestras all over the world. It’s all about building relationships, and the familiarity of old friends and people who enjoy making music together.”

You could see the relationship at work on a practical level. Repertoire for two players at the same piano requires a certain choreography. There’s just one of each pedal to share, and the hand crossings left and right — which can be so fun to watch a soloist pull off — get more complicated when another person’s involved. At times, Pompa-Baldi drew a hand away from the keyboard and into his body, making room for Friscioni, and at the close of a few delicate phrases, the two were crouched together over the same final notes at one end of the instrument. END_OF_DOCUMENT_TOKEN_TO_BE_REPLACED

The signature sounds of these famous film scores are not so much John Williams’ invention as allusions to other classical pieces. The foreboding half-step from Jaws, growing more and more furious in the cellos and basses, shares something with Dvořák’s “New World” Symphony and Bartok’s Miraculous Mandarin. END_OF_DOCUMENT_TOKEN_TO_BE_REPLACED

Unlike most concert pianists, who seem to have taken to the keyboard while they were still learning to walk, Kharitonov only began his studies at the age of 16. But he plays with such naturalness and easy virtuosity that you’d never imagine he came late to the party. END_OF_DOCUMENT_TOKEN_TO_BE_REPLACED

Each concert in “Beethoven and Beyond” includes two of LvB’s string quartets with a contemporary work in between, usually by way of contrast, although in her introductory remarks, primo violinist Annie Fullard drew thematic connections between the pizzicati in Beethoven’s “Harp” Quartet and Jessie Montgomery’s Strum. END_OF_DOCUMENT_TOKEN_TO_BE_REPLACED