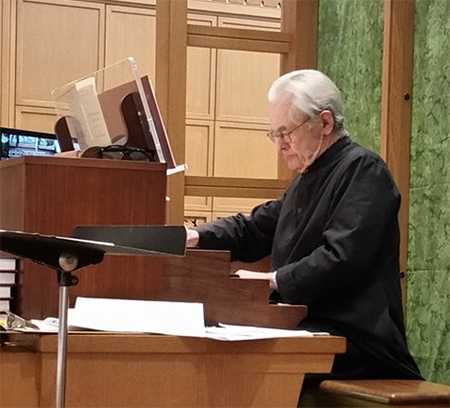 Karel Paukert has been an intrepid and fierce advocate for contemporary music in Cleveland for the better part of fifty years. Although he has retired from his position as Curator of Musical Arts at the Cleveland Museum of Art, he continues as the organist and choirmaster at St. Paul’s Episcopal Church in Cleveland Heights. Now in his 80s, Paukert is still commissioning and performing new music. His latest venture is Ars organi II, an eight-concert series at St. Paul’s continuing through October 20.

In collaboration with Cleveland-based saxophonist Noa Even, Paukert opened Ars organi II on Sunday afternoon, September 29 with several new pieces, as well as organ works from the 20th century that stand as classics alongside brand-new compositions. Even and Paukert were a well-matched pair both technically and musically. The combination of saxophone and organ proved to be extremely attractive.

Czech composer Jiří Treml composed Three Pieces for Organ (Fantasia, Responsoria, Toccata) in 2012 for Paukert in a severely modernist style, with strong dissonances, short motivic passages, and jabbing chords alternating with more lyrical moments. The “Responsoria” was especially effective, with floating clusters on the Holtkamp organ’s string stops, and occasional references to Gregorian chants. Like French organ toccatas, Treml’s last movement features streams of fast notes, syncopated rhythms with repeated patterns, and a melody played by the pedals. Paukert’s virtuosity was on display in this triptych. His grasp of the work’s technical demands as well as his panache made these an effective and dramatic musical experience. 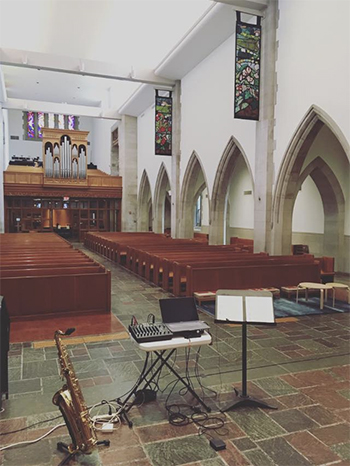 Noa Even played bodies immutable by LJ White, a transgender man, for solo tenor saxophone and electronics — both pre-recorded and generated live during performance. The program note discussed its relationship to the “proliferation of transgender existence.” That may have been White’s inspiration, but there was nothing specific in the music that would lead a listener to that conclusion, although the note also stated that the piece has a video component.

Video might have drawn the composer’s inspiration closer together with the work’s composition and execution. During the performance, the saxophone plays a series of long tones at various pitches, registers, and dynamics. Even’s sound was rich and full, and she had excellent control over the dynamic range of the various notes. Her performance was akin to performing some minimalist music — the difficulty is not necessarily in the notes themselves, but in maintaining the concentration to fold the elements into a unity. The electronics then respond to the notes played live by creating other notes at various pitches and registers, creating a moody and atmospheric effect.

Alan Stout taught for many years at Northwestern University. In 1969 he published a collection of chorale preludes for organ based on Lutheran chorale tunes. Paukert played two of them, Christ lag in Todesbanden and Nun ruhe alle Wälder. In each, the chorale melody is clearly laid out on a solo organ stop, with a dissonant, almost atonal, accompaniment. Fifty years later, the preludes are still disconcerting to hear — perhaps because of our very tonal associations with other chorale preludes — but the settings draw into focus the texts of the hymns on which they are based. 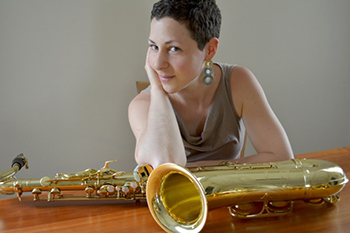 Cleveland-based composer Buck McDaniel’s So Love Was Crowned, But Music Won the Cause, for soprano saxophone and organ, received its first performance on Friday. Inspired by words from John Dryden’s ode, Alexander’s Feast, it makes reference to St. Cecilia, the patron saint of music and musicians. It is an attractive work, often diatonic and lyrical, with hints of minimalism along the way, and the timbres of saxophone and organ played well against each other. Toward the end of the work’s nine minutes duration, the saxophone plays an extended cadenza, supported at first only by a low organ pedal tone. The organ sound gradually thickens into low, heavy chords, before — suddenly — the piece ends.

Karel Paukert followed up McDaniel’s premiere with two short works by the twentieth-century French composer Jehan Alain, who died while serving in the French army during World War II. Although he was only 29 at the time of his death, his works show remarkable originality in form and harmony, with polytonality, complex rhythmic structures, and unusual combinations of organ timbres.

The brief Ballade en mode phrygien features a mournful melody, often accompanied by only one or two voices. Paukert made these phrases sing. He also explored unusual tonal combinations of the organ, effectively realizing Alain’s idiosyncratic registration indications. The much more substantial Deuxième fantaisie is based on an opening theme that recurs throughout the development of the piece in increasingly complex garb, until it reaches a massive, swirling climax. A fanfare-like statement of the theme precedes a final coda, drawing the Fantasie to a soft close.

Set in contrast with the new works on this program, Alain’s works show how much he was in the vanguard of his time, and foreshadow what he might have accomplished had he survived. A few finger slips aside, Karel Paukert’s performance of the Deuxième fantaisie was musically thrilling. Well-paced, its many sections flowed from one to another as a single thought.

The final work on the program, by recently-retired Kent State University faculty member Frank Wiley, again combined saxophone with organ. Violet Spirals of Twilight II (2018/19) was originally written for solo saxophone and string ensemble. This was the first performance of the version for organ instead of strings. A showpiece for the saxophonist, it requires virtuosic use of extended techniques (including multiphonics, quarter-tones and other pitch modifications). Noa Even was brilliant in the technical challenges Wiley created for her. The solo part was much more substantial than what Wiley gave to the organist, who mostly played soft, long-held notes and thinly-voiced chords.

END_OF_DOCUMENT_TOKEN_TO_BE_REPLACED

Supported by engagingly, yet simple staging by Cara Consilvio, a well-prepared cast of singers told the archetypal story of Cinderella with charm and flair. Framing the production was  a sparse but colorful set and wonderful lighting by Dave Brooks. END_OF_DOCUMENT_TOKEN_TO_BE_REPLACED