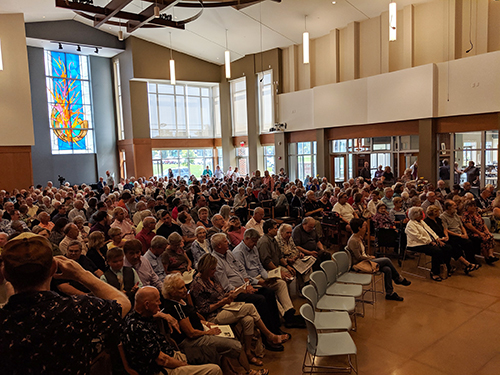 Boats are traditionally launched with a bottle of champagne broken across the bow, organs with an inaugural recital. The new Fritts organ in First Lutheran Church Lorain was officially welcomed on Sunday afternoon, August 25, with a far-ranging program impressively played by Katelyn Emerson. Absent any liquid bubbly, there was plenty of musical effervescence to delight a crowd that overflowed into the adjacent space and required more programs to be distributed during intermission.

Opus 42 of the Paul Fritts & Co. workshop in Tacoma, Washington is a handsome, mechanical action instrument comprising 37 stops deployed over 2 manuals and pedal. It replaces a groundbreaking instrument by John Brombaugh built in 1970 along historic North German principles for the former church building. Both church and organ perished at the hands of an arsonist in August of 2014.

On Sunday, the church’s flexible space was set up auditorium-style with the audience facing the organ’s handsome Douglas Fir case. Three embossed bass pipes and pipe shades carved in Germany featuring mythical creatures lend elegance and charm to its appearance. And although Fritts and his team (who were in attendance on Sunday) followed the tenets of historical organbuilding in crafting the instrument, they made things much easier for modern players by providing dual mechanical and electric stop action: you can draw stops by hand, but you can also call up 999 preset combinations of registers with the touch of a button. 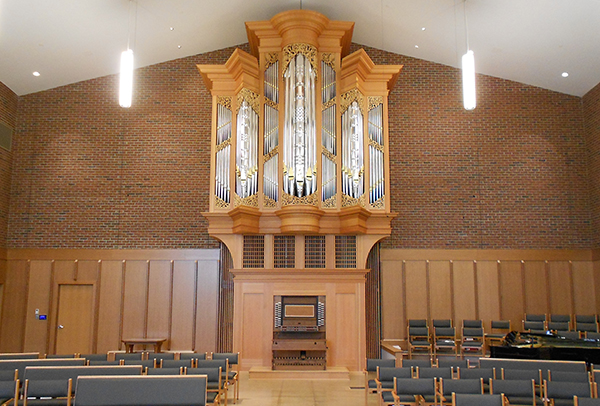 During the first half of the organ’s nearly two-hour-long shakedown cruise, Emerson revealed the beauty and versatility of the instrument in uncompromising works by Vincent Lübeck, J.S. Bach, and Georg Muffat, leavening their serious-mindedness with music by Frank Bridge and Bernardo Pasquini.

Bridge’s 1905 Adagio in E (the second of his Three Pieces for Organ) swiveled in the direction of post-Romanticism, showing off the instrument’s quieter stops as well as its capacity for crescendos and diminuendos, which Emerson handled adroitly through stop changes and the use of swell shades. If anything sounded a bit weird, Bridge’s chromatic harmonies were occasionally at odds with the instrument’s unequal temperament (it’s tuned in a system devised in the 1970s by Herbert Kellner).

The instrument’s juicy flutes figured prominently in Pasquini’s Introduction and Pastorale, an ingratiating little piece by a composer of opera and oratorio who was cozy with the Roman curia in the late 17th century.

Pasquini’s one-time student Georg Muffat, a cosmopolitan composer who moved easily among the many regional styles of 17th-century Baroque music, was responsible for the virtuosic Toccata septima that closed the first half of Katelyn Emerson’s recital, giving the audience its first real taste of the organ’s full-chorus combinations. 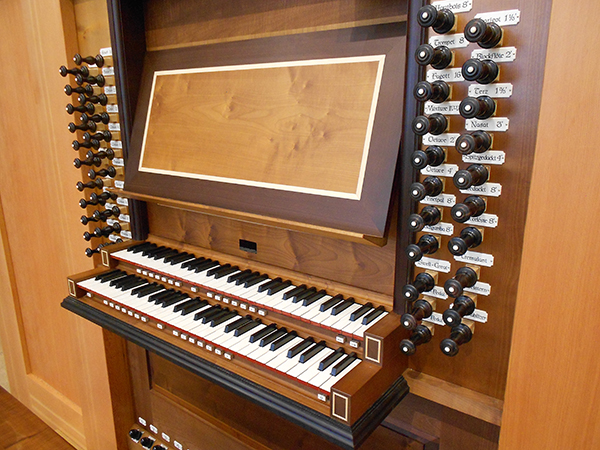 Probably the best-known work on the program, Franck’s Chorale No. 3 gave the Fritts organ an opportunity to speak in French, and Emerson’s canny selection of stops put the instrument comfortably in the tradition of Cavaillé-Coll, even if its reed stops are more fundamental and North German-sounding than their fiery Gallic counterparts.

A highlight of the afternoon was a work commissioned from Aaron David Miller, organist of House of Hope Presbyterian Church in St. Paul, Minnesota. A brilliant piece that resembles a written-down improvisation, his Chorale Fantasy on LORD REVIVE US is based on an anonymous American tune that may have been new to many in the audience.

In a tip of the hat to the deceased Brombaugh instrument, Emerson included three of Brahms’ Eleven Chorale Preludes that figured in David Boe’s dedicatory recital of the 1970 organ, choosing somber fundamental stops and meditative tempos.

The recital ended with J.S. Bach’s imaginative — and early — Toccata in E, a 1708 work in four sections that gave both organ and organist the opportunity to go out in a burst of musical brilliance. 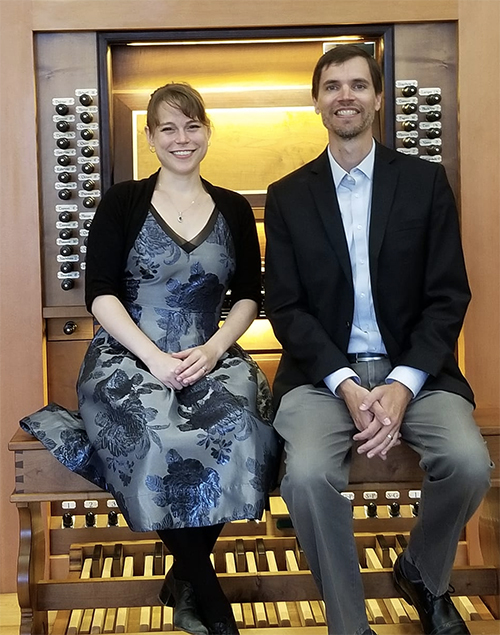 A long, rousing ovation inspired Emerson to add a brief extra work to the mix. Just in case she had left any sounds unheard, she chose some of the instrument’s more piquant registers for her performance of Jean Langlais’ witty “Thème et Variations” from Hommage à Frescobaldi.

Jackson began the program with a recitation of Langston Hughes’ poem “Helen Keller” — the first of five poems by Hughes that served as interludes between each piece on the first half. END_OF_DOCUMENT_TOKEN_TO_BE_REPLACED

Pianos with pins and tape on strings, a bass drum and tam tam, crotales, Almglocken, and vibes. Microphones were hooked up all around the instruments. The feed was sent to speakers around the room. Lighting designer Nicholas Houfek hung incandescent globes over the arrangement of instruments from thin black wires stretching across the beams. END_OF_DOCUMENT_TOKEN_TO_BE_REPLACED

From the podium, Elim Chan set an ambitious tone for the evening. The rising star conductor, here in her Cleveland Orchestra debut, has a commanding style, and every twist and turn in Saturday’s performance tracked closely with her baton. END_OF_DOCUMENT_TOKEN_TO_BE_REPLACED