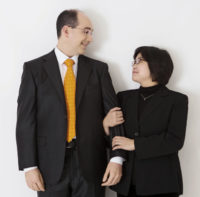 Cleveland Orchestra principal cellist Mark Kosower and his regular collaborator, pianist Jee-Won Oh, inaugurated both the 50th year of the Kent Blossom Music Festival and the newly-laid stage floor of Kent State University’s Ludwig Hall on Tuesday, July 3. This marvelously-played faculty concert featured four B’s: sonatas by Frank Bridge and Samuel Barber bookended by Beethoven at his silliest and solo Bach at his most eloquent.

British composer Frank Bridge — best known for teaching Benjamin Britten — completed his Cello Sonata during the First World War in 1917. The two-movement work moves ever forward, full of pleasant piano warblings and gorgeously-spun cello melodies as if plopped down into a tumbling stream in the forest. Kosower and Oh handled this ever-churning watercolor with great poetry.

Samuel Barber’s Cello Sonata, Op. 6 (1932) is one of the surprisingly mature works he wrote while still a student at the Curtis Institute of Music –– along with his School for Scandal Overture and Dover Beach. Like the Bridge, it is full of a Romantic ethos, but this work has more precise, hard edges rather than splays of colors. In three movements, Barber’s dramatic shapes set up beautiful melodies and brilliant virtuosity. The gem of the piece is the second movement with its morose, heart-rending Adagio and its fleet-footed middle section. Kosower and Oh masterfully shaped the impassioned prose all the way through to the sonata’s gruff end.

The recital opened with one of Beethoven’s lightest works, his 12 Variations on “Ein Mädchen oder Weibchen” from Mozart’s The Magic Flute. Written when piano chamber music favored the pianist, these variations showed off Oh’s ample skill. She was light and vibrant in Beethoven’s particularly brusque way, and gave the minor-key variations the healthy pathos they deserved. Kosower was joyful in his shining moments, though sometimes overly excited in his almost distractingly gorgeous single notes. Together they shaped the entire course of variations with good taste, although Beethoven’s play on the pining of Papageno’s wife verges on the trite.

Kosower ended the evening with his own cello arrangement of Bach’s Violin Partita No. 2 in D minor, BWV 1004. The first four movements are in the form of a standard dance suite. Playing from memory, Kosower gave a straightforward account of the opening Allemande, while the Courante was both snappy and flowing, if a little out of control. He gained more eloquence as he moved through the slow, poignant Sarabande, and the flurrying Gigue was rollicking and florid.

Kosower saved his best playing of the night for the expansive 15-minute Chaconne that ends the Partita. He paced the continuous, ever-multiplying variations over a ground bass magnificently, giving the whole movement a satisfying and electrifying architectural sweep. His burnished tone and artistic depth showed how well this powerful music can speak through the cello.

END_OF_DOCUMENT_TOKEN_TO_BE_REPLACED

Supported by engagingly, yet simple staging by Cara Consilvio, a well-prepared cast of singers told the archetypal story of Cinderella with charm and flair. Framing the production was  a sparse but colorful set and wonderful lighting by Dave Brooks. END_OF_DOCUMENT_TOKEN_TO_BE_REPLACED