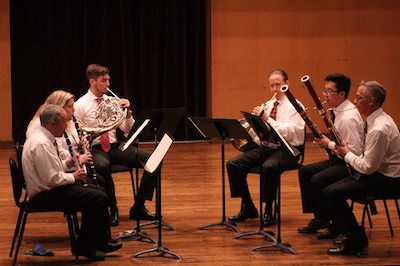 Wind players take every opportunity to play Mozart, and when they are musicians at the highest level, it’s easy to come away smiling. That was the case on the Kent Blossom faculty concert on Wednesday, July 25 in Kent State’s Ludwig Recital Hall, where an array of Mozart’s works for winds made for a splendid evening.

Mozart’s five Divertimenti, K. Anh. 229 are originally for a trio of basset horns — rare yet sonorous alto clarinets — so these works have been arranged for various other trios over the years. In this case, the Third in B-flat major was played with refined shadings and clear, flowing precision by an ensemble of TCO assistant principals: oboist Jeffrey Rathbun, clarinetist Daniel McKelway, and bassoonist Barrick Stees. Following the usual five-movement structure with two minuets, this fluffy music has a surprise: the finale’s coda clearly references the vigorous opening Allegro. The straightforwardly classical Adagio was imbued with a lovely, generous feeling, the two Menuetti flowed pleasantly along, and the main body of the Rondo finale was charmingly light-hearted.

Rathbun, McKelway, and Stees were joined by pianist Jerry Wong (faculty at Kent State) and guest hornist Hans Clebsch (Cleveland Orchestra) for a delightful rendition of Mozart’s Quintet for Piano and Winds in E-flat, K. 452. Opening with a richly grand calmness, the first movement mixed regal lines in the woodwinds with the silly, if effective, second theme’s half-step rocking. The broad Larghetto featured lovely flourishes for each player, while the Rondo showed off the group’s adroit cheerfulness. Wong’s sparkling filigree combined well with Clebsch’s regal playing and the vibrant tones of the woodwinds.

After intermission, McKelway, Stees, and Clebsch returned with three Kent Blossom students — clarinetist Meghan Colbert, bassoonist Ryan Yamashiro, and hornist Nathan Peebles — to play the original sextet version of Mozart’s Serenade in E-flat, K. 375. Most often performed in its later version with added oboes, this sextet lacks the textural brilliance of the octet, but contains all the necessary material for this pleasing music to come across.

The outer four movements balance around a gorgeous central Adagio. The opening Allegro maestoso was grand and sturdy, while the final Allegro was drivingly joyful. Of the two stately dance movements, the first Menuetto was pushed forward in tempo, to gripping effect, while the second included tastefully paced slow-downs. The Adagio, one of most Mozart’s beauties, was on the fast side. This tempo worked wonderfully for the players to spin the repeated-note accompaniments into buoyant soundscapes, but wiped free every cadence — especially the last — of its charm. The three Kent Blossom students held their own with the seasoned professionals in Mozart’s always-demanding music.

END_OF_DOCUMENT_TOKEN_TO_BE_REPLACED

The strings-only work by Berg has made relatively frequent appearances on the Orchestra’s programs. In 2021, the musicians recorded it for the In Focus series, and it appeared again on last year’s European tour. Friday’s rendition maintained the group’s characteristic light and effortless playing, each section blending as much as possible to echo the work’s original form as a string quartet. At fifteen minutes total, the piece is quite short, but the dense encoded musical meanings require some extra-attentive listening. Splitting up the three movements ensured that each one could be appreciated on its own. END_OF_DOCUMENT_TOKEN_TO_BE_REPLACED