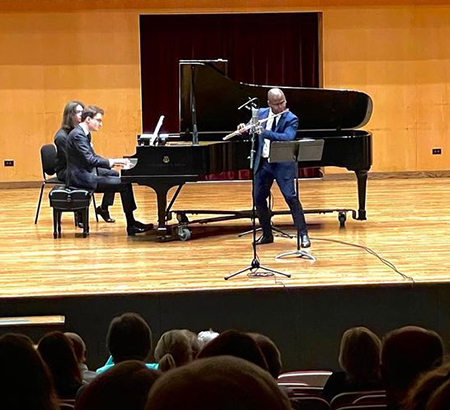 Midway through his performance on July 21 at Ludwig Recital Hall — part of this year’s Kent Blossom Music Festival — flutist Demarre McGill invited the audience into an understanding of his program with an abstract but heartfelt speech. It was all preface to the next piece on the program, an arrangement of three short songs by William Grant Still.

McGill described the “unlikely duo” of emotions coursing through Still’s music, a balance between “mystery and hopefulness” or “nostalgia and energy” — or simply and musically put, major and minor. The flutist kept the discussion artistic, even suggesting that all this talk doesn’t really have any bearing on the music itself.

But it might be helpful to put things in perspective. Still is one of a handful of Black composers whose work has come to the fore in the renewed push for diversity that classical music has been making in the past year. More specifically, Still — who was born in 1895, was active during the Harlem Renaissance, and died in 1978 — is at the center of an effort, which began well before 2020, to define and codify a tradition of African American composers.

With his introduction, McGill didn’t exactly have the piece speak for itself, but he was ultimately making a musician’s case, which in performance will always be more effective than a historian’s.

The flutist brought a distinct, sweet, lightly airy sound — a star orchestral player’s signature tone — to the set of Still Songs. He shaped phrases in “Bayou Home,” “If You Should Go,” and “Song for the Lonely” with poetic sensitivity. Pianist Rodolfo Leone, a versatile accompanist throughout, adroitly handled the major-minor pull of harmonies.

This is music on the scale of melancholy miniatures, the sort of piece any performer looking to change up his or her repertoire should be exploring. (Alexa Still, the professor of flute at Oberlin Conservatory, made the arrangement.) A simple melody can be more affecting than the flashiest piece of music.

Big modern works made up the rest of Wednesday’s program. McGill and Leone tackled two substantial sonatas, by Lowell Liebermann and Yuko Uebayashi — contemporary composers who have found an enthusiastic audience in flute players with technique to burn.

Liebermann writes long, meandering lines for the flute, punctuated by the occasional outburst. The Uebayashi Sonata is lush in comparison but not particularly memorable. Both pieces are a chance to show off, and McGill seized on the opportunity, at times muscling through the loud, fast, and high sections. He was at his virtuosic best in light articulated runs in the Presto and Allegro movements, which sounded effortless.

Fanmi Imèn, a 2018 work by flutist and composer Valerie Coleman, opened the program, and like the two sonatas, it caters to some of the instrument’s natural strengths while exposing its weaknesses. High passages had the soloist sounding one note on the flute while vocalizing it a couple of octaves lower.

McGill returned the program to something more purely vocal with his encore, a setting of the spiritual Deep River — another melody that called for both simple and moving playing.

END_OF_DOCUMENT_TOKEN_TO_BE_REPLACED

Supported by engagingly, yet simple staging by Cara Consilvio, a well-prepared cast of singers told the archetypal story of Cinderella with charm and flair. Framing the production was  a sparse but colorful set and wonderful lighting by Dave Brooks. END_OF_DOCUMENT_TOKEN_TO_BE_REPLACED