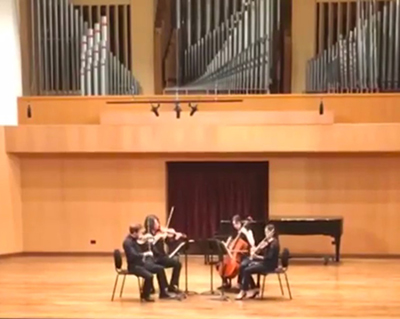 Something old, something new, something borrowed, something (far darker than) blue: an afternoon program last weekend in the Kent Blossom Music Festival’s Student Concert Series had something for everyone. From lithe Mozart to vibrant new music, from repurposed film and ballet cues to a thundering Romantic rarity, the pieces on offer benefited from the expertise of the eighteen young performers who took the stage.

The concert on July 14 in Kent State University’s Ludwig Recital Hall opened with Mozart’s Quartet No. 17 (“Hunt”). Though the piece remains lighthearted, the passagework for the first violin in the opening Allegro is no joke. Mitchell Reilly handled the part with grace, and Yuzhe Qiu displayed both independence and team spirit as the second violinist. Thanks in large part to strong rhythmic accents from these violinists and violist En-Ting Hsu, the minuet had a winning lilt. In the Adagio, cellist Cherry Leung’s basslines and brief solo moment gave the music a feeling of pliability; some of her shifts bordered on slides, a compelling move in this context.

Cleveland Orchestra assistant principal oboe and Kent Blossom faculty member Jeffrey Rathbun’s Rocky River Music (2014) brought a wind octet to the stage. Its first movement, “Danger,” opens with brashness and bustling — Rebecca McGown and Ava Conway, both excellent throughout, soared. First bassoonist Jamael Smith leaned into his part with the kind of absolute technical assurance that left room for some edge. He and second bassoonist Keegan Hockett propelled each movement from the bottom up as the clarinets and oboes blended in flawless intonation. First oboist Virginia Kao nailed a high solo in the second movement, “Humanity,” and second oboist Paul Chinen wove lovely countermelodies below. Clarinetist Dustin Lin sounded confident even in his highest register; Meghan Colbert, playing second, gave strong support. The third movement, “Fearless,” is a romp worthy of an adventure-film soundtrack.

Violinists Wei-Ni Hung and Reilly harmonized well in the “Prelude” of Shostakovich’s Five Pieces for Two Violins and Piano, a set of tunes clipped from stage and screen scores. Capable of more than just tonal loveliness, the pair — especially Hung — treated the “Waltz” as an opportunity to dig in. Pianist Hikari Nakamura displayed a fine rhythmic sensibility in the “Gavotte,” and pounded out the mock-aggressive accents of the concluding “Polka” with charming exuberance.

The program concluded with a performance of Franck’s Piano Quintet. Violist Yee Ling Elaine Ng tore into the first movement’s lines with clear, energetic gestures, and pianist YeeJin Park channeled both the hothouse passion and break-the-keyboard power of Romantic pianism. First violinist Paula Castaneda made a great leader, and Hung tackled a second violin solo with apparent ease. Cellist Hari Parkash Khalsa, who has an ideal tone for this sort of piece, demonstrated as much in the second movement. The third movement proved gripping. The piece itself feels less like a balanced meal than three steaks in a row. Its angst and complexity can overwhelm. But, in this ensemble’s hands, it afforded a rare glimpse of this composer’s distinctive chamber music.

Supported by engagingly, yet simple staging by Cara Consilvio, a well-prepared cast of singers told the archetypal story of Cinderella with charm and flair. Framing the production was  a sparse but colorful set and wonderful lighting by Dave Brooks. END_OF_DOCUMENT_TOKEN_TO_BE_REPLACED

END_OF_DOCUMENT_TOKEN_TO_BE_REPLACED

The music isn’t easy to play, either. Over the course of two hours, all of the musicians brought fantastic focus to the unrelenting tricky rhythms and countless layers of parts, all of which require a high level of individual responsibility. Even in the moments of calm, the accompaniment remains perpetually unsettled. Adams — who made a sprightly presence on the podium — combines minimalist, repeating motives in gradual layers, which eventually become so dense they overwhelm the senses. Lisa Wong deserves special mention for her thorough preparation of the Cleveland Orchestra Chorus, as does Jennifer Rozsa for the Children’s Chorus, which made a brief but memorable appearance in the last few minutes. END_OF_DOCUMENT_TOKEN_TO_BE_REPLACED