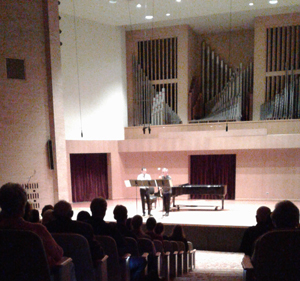 One of more than 50 works Heitor Villa-Lobos dedicated to his long-time companion Mindinha, the Duo for oboe and bassoon was composed in 1957 but had to wait ten years for its debut performance in Rio. The piece, at 15 minutes’ duration, is what wind players call a “long blow,” but Rosenwein and Stees showed no signs of fatigue as they negotiated the technical demands of the piece. So continuously do the instruments play that there’s no time to turn pages. Instead, the score was laid out over a pair of music stands, the performers moving from left to right as the music scrolled onward.

The Duo is definitely 20th-century modern, with its spiky dissonances and healthy doses of atonality. It’s also colorful and sometimes humorous — as when Villa-Lobos has the oboe and bassoon chase each other like playful squirrels. 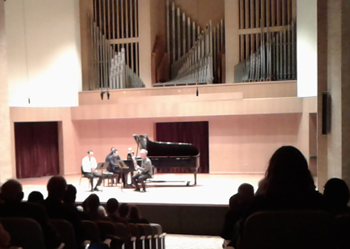 Arrangements of early Renaissance chansons for oboe, bassoon and piano might seem an unlikely endeavor, but Willard Elliot’s Suite of Six French Songs of the 15th Century is delightful on many levels. Elliot, who served as principal bassoon of the Chicago Symphony for 32 years, brings Stravinskian wit, mildly dissonant harmonies, and nicely varied textures to his reworkings of half-a-dozen obscure Gallic tunes. Rosenwein, Stees, and Wong communicated their charm in glowing performances.

Wong closed out the first half of the evening with George Rochberg’s Four Short Sonatas, explaining to the audience beforehand that they should think of Scarlatti’s short binary pieces rather than the full-blown, four-movement sonatas the title later implied.

More atonal than the works that preceded them, Rochberg’s pieces were in turn reminiscent of Baroque two-voice inventions, Bartók-like in their rhythmic complexity, or primarily violent and forceful, elements that Wong brought to the surface with confident virtuosity. 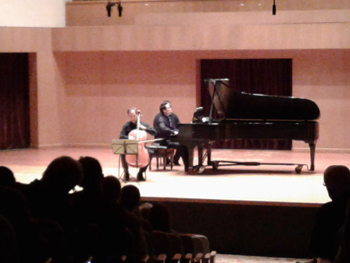 After intermission, Richard Weiss joined Jerry Wong in a vibrant reading of Brahms’s e-Minor Cello Sonata — a work whose original title read “Sonata for Piano and Violoncello” to point up the equal role the composer conceived for the two instruments. True to Brahms’s intentions, Wong and Weiss balanced their contributions admirably into a thrilling whole.

Brahms’s Second Hungarian Dance in an arrangement by Valter Dešpalj amounted to a programmed encore, ending the Kent/Blossom faculty series with an appropriate flourish. The nearly-full house obviously loved it.

END_OF_DOCUMENT_TOKEN_TO_BE_REPLACED

Rodgers & Hammerstein’s Cinderella was originally produced for television in 1957 — seven years after the animated Disney film was released — and starred Julie Andrews. According to the Rodgers & Hammerstein website, it was viewed by over 100 million people. END_OF_DOCUMENT_TOKEN_TO_BE_REPLACED

The story line has its origin in an 1855 play and an 1842 farce that Thornton Wilder mined for his 1938 play The Merchant of Yonkers. When that turned out to be a flop, in 1954 Wilder made the crucial decision to re-center the show around the character of the legendary marriage broker Dolly Gallagher Levi and renamed it The Matchmaker. END_OF_DOCUMENT_TOKEN_TO_BE_REPLACED

The Dodero Center for the Performing Arts at the Gilmore Academy in Gates Mills is one feature of an impressive campus. The auditorium is shallow, the stage is deep, and the ensemble played without a shell. Throughout the program, the sound, especially in instruments’ lower registers, tended to disappear. END_OF_DOCUMENT_TOKEN_TO_BE_REPLACED