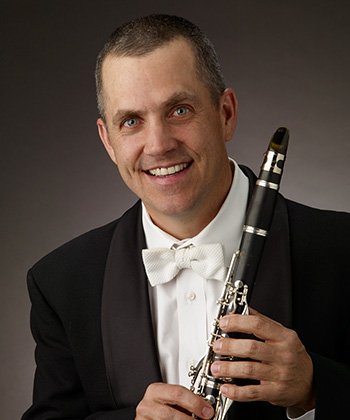 Clarinetist Daniel McKelway is an admitted fan of the great masterworks for his instrument. On his soon-to-be-released CD on the Louisville, Kentucky-based sonaBLAST Records, he is joined by soprano Amelia Baisley, pianist Hyunsoon Whang, and TCO violist Lembi Veskimets in performances of Mozart’s Trio in E-flat, K. 498, “Kegelstatt,” and Schubert’s Der Hirt auf dem Felsen (“Shepherd on the Rock”).

“These are my favorite pieces,” the Cleveland Orchestra assistant principal clarinet said during a recent conversation. “They have been my whole life and I haven’t outgrown them.”

This week McKelway and his recording colleagues will perform these works during a Kent/Blossom Festival faculty concert on Wednesday, July 21 at 7:30 pm in Ludwig Recital Hall. The clarinetist will also be joined by TCO hornist Richard King in George Rochberg’s Trio for Clarinet, Horn and Piano. Click here for ticket information.

The Davidson, North Carolina native said that the concert came about in a couple of ways. “I have the CD coming out with the Mozart and Schubert, and Rich King, who had a connection with Rochberg, has wanted to play the Trio for a long time. He caught me backstage at Severance one day and asked if I was interested in playing it, expecting me to say, ‘No.’ But I was tickled that he asked me, so I said, ‘Yes, let’s do it.’ It’s a very charming piece with a lot of interesting sonorities combining the two wind instruments. There are also some good-humored lines.”

McKelway, the recipient of an Avery Fisher Career Grant in 1989, said that soprano Amelia Baisley is a very good friend, and a wonderful singer. “She’s with the Mendelssohn Choir of Pittsburgh. This past February she invited me to perform in James Whitbourn’s Annelies. It’s a work about Anne Frank for soprano, choir, and originally orchestra, but it was arranged by the composer for chamber ensemble.”

McKelway, also a winner at the 1984 Young Concert Artists Auditions, has known pianist Hyunsoon Whang since they were students at the North Carolina School of the Arts during the late 1970s and very early 1980s. “We were just kids then, but we played a lot of concerts together when I was pursuing a career as a soloist and chamber player.  She’s now living and teaching in Oklahoma, but we try to get together a couple of times a year for a performance.”

When asked why he loves the Mozart and Schubert so much, the Baldwin Wallace faculty member cited the works’ lyrical and expressive qualities. “In the Schubert, even if you don’t know the words, there’s a story there that is incredibly powerful for both the player and the listener. And clarinet players all have a powerful connection to Mozart. One of his very best friends was the clarinetist Anton Stadler, and without him we wouldn’t have works like this one, the Quintet, and the Concerto. We all feel like we are good friends with Mozart through these pieces.”

McKelway, who began studying the clarinet at the age of eight, noted that it was a recording of the Schubert performed by the late Harold Wright, principal clarinet of the Boston Symphony, that made him want to become a chamber music player. “When I was a kid my mother brought home a recording of him playing Shepherd on the Rock. When I put it on and I heard this beautiful sound with a little bit of vibrato and a little bend in the sound — I was so taken with it. I was already a fan of Bob Marcellus’s recordings, and I still am, but there was something so uniquely personal about Harold’s sound.”

The record jacket indicated that the recording had been made at the Marlboro Music Festival. “I decided then that my life wouldn’t be complete if I didn’t go there — and I have,” McKelway said. “I’ve played the piece my whole life and it’s a wonderful thing to get to do.” McKelway also studied with Wright at the New England Conservatory.

The Rocky River resident pointed out that there is some disagreement among players regarding the first-movement tempo of the Kegelstatt. “It is unusual to have a first movement marked andante, but I have come to believe that it is in fact the work’s slow movement. It’s a four-movement work with the first movement missing. I don’t think it was written and then lost — he just decided not to write one. But it’s also not a three-movement work with a ‘sort of slow’ first movement. I’ve been thinking about the piece for a very long time. I’ve played it a lot, and it’s always a treat to get to play it with my wife Lembi. It was the first piece of chamber music we ever played together, and our relationship survived the experience.”

The Cleveland Orchestra — or at least half of it — marked Valentine’s Day with a straight-through, 50-minute concert led by Belgian early music guru Philippe Herreweghe. The February 14 performance, marketed as a romantic evening of orchestral classics, played to a packed house (marketing works!). END_OF_DOCUMENT_TOKEN_TO_BE_REPLACED

Music is said to be a universal language, but it does speak with different accents. When you’re playing music by Jean Sibelius, it’s helpful to have a Finnish conductor on the podium, which is what made Susanna Mälkki’s pair of Cleveland Orchestra concerts so lucid and communicative earlier this month. END_OF_DOCUMENT_TOKEN_TO_BE_REPLACED

END_OF_DOCUMENT_TOKEN_TO_BE_REPLACED

Today’s touring string quartets hew to so uniformly high a standard that it’s often little individual touches that make ensembles stand out. The Polish musicians who make up the Apollon Musagète Quartet showed up at Plymouth Church in Shaker Heights for their debut on the Cleveland Chamber Music Society series on February 4 in matching plaid suits and black shirts. And jettisoning their jackets, they played standing (except for the cellist). END_OF_DOCUMENT_TOKEN_TO_BE_REPLACED