A new piano concerto is always an occasion, but the premiere of Thomas Adès’ Concerto, performed by pianist Kirill Gerstein and the Boston Symphony under the direction of the composer, has caused critics and audiences to sit up and take note. Following the New York premiere of the work, Anthony Tommasini of The New York Times wrote that the Concerto was

written for Gerstein, who exhilaratingly dispatched this joyous and audacious piece’s formidable solo part… This breathless, 20-minute concerto, structured in three essentially traditional movements (fast, slow, fast), comes across as zesty and accessible. But don’t be fooled. Just below the surface, the music sizzles with modernist harmonies, fractured phrases, gaggles of counterpoint and lyrical strands that keep breaking into skittish bits. The finale is a riotous, clattering, assaultive romp. I can’t wait to hear it again.

This weekend Kirill Gerstein will play the Cleveland premiere of Adès’ Piano Concerto with The Cleveland Orchestra under the direction of Alan Gilbert. The program also includes J.S. Bach’s Suite No. 3 and Brahms’ Symphony No. 3. The Severance Hall concerts take place on Friday, October 11 at 11:00 am (no Bach) and 8:00 pm, and Saturday, October 12 at 8:00 pm. Tickets are available here.

During a telephone interview from his home in Berlin, Gerstein said that he first approached Adès about writing a new work for him when they were performing the composer’s In Seven Days with the Boston Symphony. “I knew I’d have a long time to wait because he’s an in-demand composer, so I asked him to write a piece for me at some point,” the pianist recalled. “He rather shyly asked, ‘Does it have to be a solo piece?’ I said it could be whatever you want — as a genius composer, you can say what it’s going to be. He said, ‘I think I’d like to write a proper piano concerto,’ as if In Seven Days isn’t proper.”

Gerstein said that what transpired was the shortest commissioning conversation in history. He mentioned the possibility of a new piano concerto by Adès to Boston Symphony artistic administrator Tony Fogg, who was onboard with the idea from the get-go. 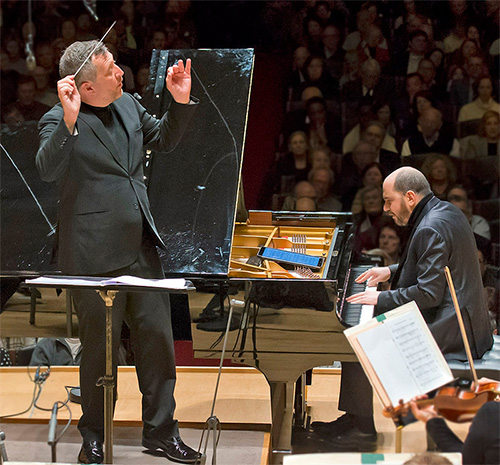 Adès and Gerstein with the Boston Symphony. Photo by Winslow Townson.

“I’m quite convinced this is the big concerto of the last 50 to 60 years,” Gerstein said. He added that not since Ravel and Prokofiev had one been written that has entertainment value for the public and also makes no compromise in originality and musical substance. “It’s really a masterpiece, and after the premiere in Boston I think everybody felt that it’s an instant classic.”

Once word got out that Adès was writing a piece for Gerstein, there was immediate interest from the orchestral world. “Even before it was heard by anybody, there were already a number of orchestras who asked to program it. Then, with the success of the premiere, word spread quickly. I think we now have about 40 performances scheduled. That’s very different from pieces that get commissioned and played once, and a second time by the commissioning co-partner, then recede into oblivion. This acquired a life of its own.”

When working with any great composer, Gerstein adopts a ‘stay out of the way’ attitude. “Occasionally Tom would drop tantalizing hints — ‘I’m writing the cadenza now’ or ‘I think I have an idea for the third movement’ — but I think it’s important not to stick one’s head into the creative process.”

Once the pianist received the score, conversations between soloist and composer did ensue. “I started sending him little videos from my iPhone — excerpts of what I was practicing — or asking him questions. He sent me a nice message saying that it was wonderful to finally not be alone on this road.”

The pair have a professional friendship that dates back to their first meeting in 2006, when Adès was conducting Stravinsky’s Les noces and Gerstein was one of the four pianists. (The other three were Katia and Marielle Labèque, and Jean-Yves Thibaudet.) “After that he came to some concerts of mine and, as they say, one thing led to another. It’s always inspiring to play with him, but it was great to have him on the podium for the premiere. That shines a light on what we don’t have when playing Beethoven: the chance to ask, ‘What were you thinking here?’ or ‘What does this mean?’”

The pianist, who has become a Cleveland Orchestra regular, looks forward to bringing the Adès Concerto to Severance Hall. “It’s an honor to play with them and to bathe in the sound ethic of that orchestra. It’s a joy because as a soloist you come to play once, then twice, and eventually you recognize people and become friends with the players. It’s very nice when it turns into a musical and personal friendship.”

END_OF_DOCUMENT_TOKEN_TO_BE_REPLACED

Although it wasn’t the original plan to go online last weekend for the final round of the James Stroud Classical Guitar Competition, moving to a digital format suited the event well. Young performers Aytahn Benavi, Patricia Hernandez, Ian Tubbs, and Eric Wang played in the intimate setting of their own homes, giving everyone who tuned in a front row seat. END_OF_DOCUMENT_TOKEN_TO_BE_REPLACED

END_OF_DOCUMENT_TOKEN_TO_BE_REPLACED

Joining a long list of arrangers, Parker Ramsay has now transcribed the Variations for the modern pedal harp, an instrument for which he holds a master’s degree from Juilliard, in addition to a degree in history from Cambridge University, plus a master’s in historical performance (organ and harpsichord) and an artist diploma (organ) from Oberlin. END_OF_DOCUMENT_TOKEN_TO_BE_REPLACED