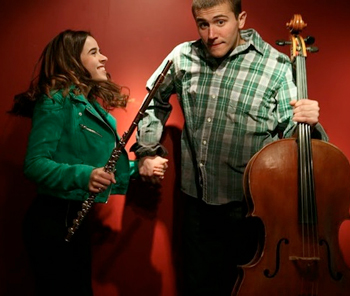 The story of how flutist Kimberly Zaleski and cellist Trevor Kazarian came to form the duo In2ative is fit for the big screen. After graduating from the Cleveland Institute of Music they both worked in restaurants, until one day they found themselves out of work. It was at that moment that they decided to take the risk.

“We literally went to CoolCleveland and searched for all of the festivals in the area,” Kazarian recalled during a conference call with his musical partner. “We would go to each event, put out a hat, and play. We were paying our rent from tip money, but at the same time we were meeting people and making connections. I feel that a lot of what we have today goes back to that moment of taking the risk, and really going for what we believed in. We’re lucky to be in the situation that we are now.”

On Thursday, November 5 at 7:30 pm in the Cirigliano Studio Theater at Lorain County Community College, In2ative will present a concert as part of the Signature Series. The program will feature twelve original works fusing diverse musical genres ranging from alternative rock to improvisational jazz and classical, along with beat-boxing swing and hip-hop. To hear a sampling of their high-energy music, visit the group’s YouTube channel. “Unless you have our CD, whenever you come to one of our programs, it will be music that you have never heard before,” Zaleski pointed out.

“For this concert we’re using more electronic equipment — like the Launchpad — which adds another dimension to the music,” Kazarian said. How did he get into electronics? “My dad plays classical guitar, but he also loves playing electric guitar, and back home in the attic he has all this equipment,” the Chicago native said. “The first time I started messing with a drum pad was during high school, but until recently I hadn’t really experimented with one. My brother manages a hip-hop artist and I knew he would be up on these things, so I asked him what kind of machine would be good for drums. He mentioned Launchpad.”

The duo said that they’re constantly searching for different sounds and colors that will give their acoustic instruments a bigger soundscape, and since they do play high-energy, “spunky” music, they feel the drums add a lot. “We want our music to be something different,” Kazarian said, “but at the same time something that the average person who turns on the radio can relate to.” The duo is also part of Cleveland’s Center for Arts-Inspired Learning, and they said that when they present workshops the students are not only introduced to the flute and cello, but also to electronics. “It brings the kids into the music in a unique way,” Zaleski added. Playing music that is fun and captures people’s attention is what they’re all about.

As a student Kazarian would often take part in jam sessions with his friends, but he recalled being impressed the first time he heard Zaleski improvise. “I was living in Little Italy and my cellist roommate and I would jam just for fun. One day Kim came by with her flute, so we asked her if she wanted to join in. We didn’t think she was going to be amazing at it, but when she started playing she just blew both of us away.”

Did Kim Zaleski know she housed that talent? “No, and I remember being nervous at the time. But once I started playing I thought, ‘Oh-my-gosh, this is really fun.’ It was liberating. I didn’t know what I could do and I’m still figuring it out, but it’s fun because I’m constantly growing and learning.”

In addition to performing and teaching, In2ative have recently been named musicians in residence at the Cleveland Clinic, where they had been playing once a month for some time. Being in residence will require the duo to go through a training process with music therapists. They said they were chosen because their music fits the hospital setting well. “We love performing there, so this is an honor,” Zaleski said.

Kimberly Zaleski and Trevor Kazarian couldn’t be happier that they made the decision to stay in Cleveland and form the duo. “This is such a culturally rich area and so accepting of what artists are doing. And the affordability of Cleveland makes it attractive,” said Zaleski, a native New Yorker. They both agreed that having The Cleveland Orchestra close at hand is an added bonus. “Classical music here is at such an extremely high level. It’s fantastic to be around so many great musicians,” Kazarian said.

“I remember the moment that Trevor said we just need to get out into the community and play our music,” Zaleski recalled. “I remember thinking, ‘what are we getting ourselves into?’ But the opportunities that we’ve garnered from taking the risk have been great. People have been so supportive. I think that’s a reason we’ve stayed in Cleveland — we started something here and we want to see where it goes.”

END_OF_DOCUMENT_TOKEN_TO_BE_REPLACED

The strings-only work by Berg has made relatively frequent appearances on the Orchestra’s programs. In 2021, the musicians recorded it for the In Focus series, and it appeared again on last year’s European tour. Friday’s rendition maintained the group’s characteristic light and effortless playing, each section blending as much as possible to echo the work’s original form as a string quartet. At fifteen minutes total, the piece is quite short, but the dense encoded musical meanings require some extra-attentive listening. Splitting up the three movements ensured that each one could be appreciated on its own. END_OF_DOCUMENT_TOKEN_TO_BE_REPLACED