Jarrett Hoffman: It’s so rare right now for a singer and an oboist to perform in fairly close proximity to others. How did that feel — was there any strangeness just because social norms have changed so much, or was there any anxiety? 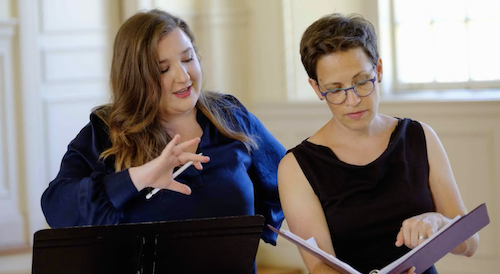 Hannah De Priest: I felt totally safe. Les Délices is privileged to have so many medical doctors on their board, and they were so transparent with the artists. I was joking with Debra that the rider attached to my contract was something like eleven pages long — it had diagrams and so much information.

We were all going into it eyes-open, and the expectations were so clear that I felt secure. You know, singers and oboists — we’ve been labeled super-spreaders, and I’m grateful that Les Délices didn’t just cut out voice and winds from their season. They adapted creatively.

Debra Nagy: We are being cast as super-spreaders, but you’re not spreading anything if you’re actually not infected — and the only way to know that is if you’re tested. That’s not the be-all and end-all of a responsible approach, as we’ve seen in the White House, but it can still give us some reasonable sense of assurance that we can be secure in working together carefully, for a limited but intensive amount of time.

Hoffman: Let’s get into these characters and this music. Hannah, you wrote a great article about Circe and her complicated moral compass — she can be benevolent, but she also has a dark side. What’s it like to step into a role like that? I imagine that it could be pretty satisfying.

De Priest: Totally. I think there’s a reason why people always say that villains are the most fun characters to play. And especially in French Baroque opera — maybe Baroque opera in general — women just make really satisfying villains. For whatever reason, a lot of the male characters are either so evil that there is no ambiguity, or they’re these titans of virtue. Women get to be more complex and honestly more human, even though the roles were mostly written by men — although the librettist for Medée is a woman.

Nagy: Marie de Louvencourt — I talk a little bit about her in the program notes. She wrote at least a half-dozen cantata texts, and frequently with women protagonists.

De Priest: But that internal back-and-forth, beat by beat, is where all the drama comes from. To bring out those interior emotions is really satisfying, even though it was a little scary to do it with HD cameras on you (laughs).

Hoffman: That’s interesting about the Medée librettist. This text seems fairly sympathetic to the character’s story — the worst thing she does here is ask the gods for vengeance.

Nagy: One thing I find really interesting is that normally a cantata ends with a sort of moralizing aria, and this one doesn’t do that at all. There’s no apology, no finger-wagging, which is how Circe ends. And to be honest, Marie de Louvencourt leaves out the most offensive of Medea’s crimes — there’s no mention of matricide or fratricide. In this very small form, it becomes about the love triangle.

I was actually just planning out the pre-concert talk, and I was reading a little bit of Metamorphoses and Heroides, reviewing the sections both on Medea and Circe. One thing that I find so fascinating is that Medea’s story is so full of self-doubt, and I think that’s discernible in Clerambault’s cantata.

Hoffman: I noticed in the trailer for this concert that there’s some dramatic lighting — in some cases you’re leaning into the spooky atmosphere, which is really fun. And since the proximity to Halloween is part of the theme here, I want to ask a slightly silly question: do either of you have any favorite Halloween costumes from your past — or present?

De Priest: Halloween was always a big thing in my family. We all love dressing up — we had a whole closet of dress-up clothes, and my mom is really talented at sewing, so we were never lacking in costumes. And looking back, I was actually a witch so many times [see below]. It’s an easy costume, but I just always loved it. I don’t dress up as much as I used to, but that deep love of dress-up and make-believe is probably one of the things that drove me to singing.

Nagy: Well, I often feel like a cultural outsider, if I’m perfectly honest. I’m a first-generation American — my parents are European — and as a result, so many American traditions just didn’t take in our house. I also grew up just outside New York City in the 1980s, and of course Halloween is traditionally a time for mischief. But there was a lot of vandalism and terrible things like that, so in our family, it was actually considered dangerous to go trick-or-treating. So we didn’t really do that. It’s too bad because my partner thinks that Halloween is the absolute best thing ever (laughs). And I’m like — I don’t have Christmas, I don’t have Halloween. 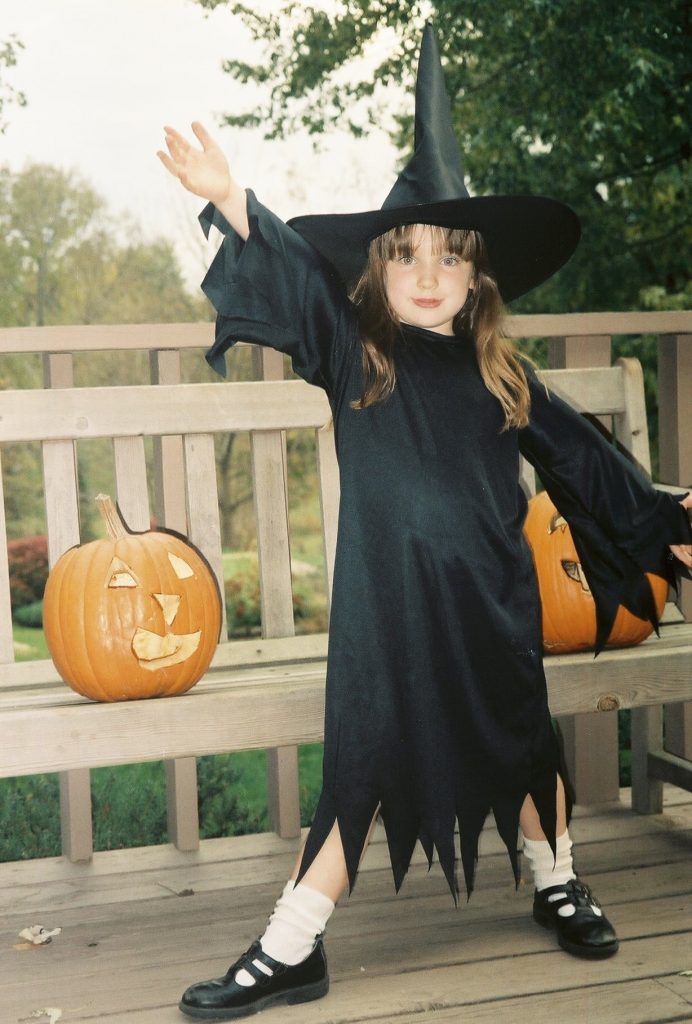 De Priest: And yet, here you are creating all of these programs now! [Next in the Concert Series is a Christmas program.] Maybe you’re living out this pent-up thing that you’re not even consciously aware of (laughs).

Nagy: Well, I love the drama, the imagery, and the associations. It’s just that there aren’t too many fantastic pictures of 8-year-old Debra running around in a witch costume. It did just occur to me — I had an amazing school music teacher in fifth grade, and my class did The Magic Flute. And I was the Queen of the Night. We took a chef’s toque and made this amazing hat with stars and tinsel and silver spray paint. Anyway, that was probably the closest thing I had to a Halloween costume.

But I’ve actually made my post-concert drink — my witch’s brew is all ready. [She gets it from the fridge to show us on-camera.] I have to say, I’m a little disappointed that it seems to be oxidizing a bit. It’s a lemon verbena liqueur — it was sort of olive green, and now it’s turning a little brownish, which is too bad.

De Priest: Should we do a signature cocktail?

Nagy: Yes, this is going to happen.

Hoffman: And I think that’s a good note to end on (laughs). It’s funny, I usually say something like good luck at the end of an interview, but here you’re already done.

Nagy: Well, we’re still tweaking bits and pieces of video, but it’s looking beautiful, and it’s been such a lovely opportunity to rethink the format. It’s not just a concert where you put up a few video cameras and call it a day — it’s much more special than that.

After the initial window of October 22 – November 2, “Bewitched” will also be presented by Early Music Hawaii from November 13 (7:00 pm HST) through November 17.

END_OF_DOCUMENT_TOKEN_TO_BE_REPLACED

Franz Welser-Möst led the final bows on Saturday night at Severance, like the star of any show should. The Cleveland Orchestra’s music director is in his element presiding over the ensemble’s annual opera production, which this season packs the drama. Verdi’s Otello — in a concert staging that opened May 21 and runs for two more performances (May 26 and 29) — demands big voices, instrumental forces to match, and a conductor who can give it all shape and direction. END_OF_DOCUMENT_TOKEN_TO_BE_REPLACED

The cimbalom was the feature of the show, an instrument capable of taking on many personas. Its performer, Chester Englander, has shaped his career around the instrument, and has inspired composers to write more repertoire for it, some of which was presented on the program. END_OF_DOCUMENT_TOKEN_TO_BE_REPLACED