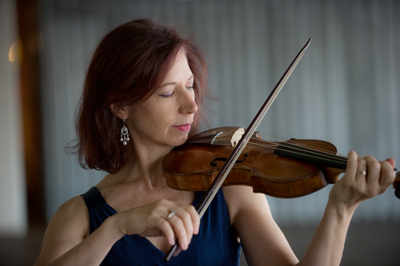 Try as he did, even Louis XIV’s edicts on style and taste could not suppress the cross-pollination of the “refined” music of late-17th and early-18th century French musicians with that of the more “flashy” Italians. This past weekend, Les Délices, the always-creative and musically polished French Baroque ensemble, opened their season with two performances of a program titled “Inspired by Italy.” I heard Sunday afternoon’s concert in the Herr Chapel at Plymouth Church.

One of the first French composers to try his hand at writing in the Italian style was Jean-Féry Rebel. And his Sonata Le Fidelle (“Faithful one”) for violin and continuo is defined by contrasting sections ranging from the dark chromatic opening and a spirited fugue to a graceful air. Andrijeski was brilliant during the “lentement,” negotiating thorny double-stops with ease. Walhout’s and Edwards’ continuo lines were stylish, and the full ensemble was superb during the sonata’s many fast — at times downright strange — transitional passages.

Although he initially shied away from claiming ownership of his works in the Italian style, François Couperin eventually became comfortable with his music that blended the disparate French and Italian styles. On Sunday, the four Les Délices musicians moved effortlessly between the tempo changes of the composer’s moody Trio Sonata L’Astrée.

Each work on Sunday’s program takes unexpected harmonic, melodic, and rhythmic twists and turns, and Antonio Guido’s four-movement Sonata III from Sonates a violon seul is no exception. Andrijeski’s sweet, pure tone filled the chapel with long phrases and nimble ornamentation during the opening movement. Following the graceful Piacevole, violinist and continuo launched into the jolly Allegro before bringing the work to a slower, elegant conclusion.

Bernardo Pasquini’s Toccata con lo Scherzo del cucco for solo harpsichord is defined by fast technical passages that are continually interrupted by a cuckoo. Mark Edwards found the right amount of humor in the nagging bird, never letting it get in the way of his formidable technique and thoughtful phrasing.

Andrijeski’s interpretation of the beautiful Ciaccona from Michele Mascitti’s Sonata VIII from Sonata a violono solo, was the highlight of the afternoon. Beginning delicately, the work slowly evolves into wild virtuosic passages, which the violinist performed with aplomb. Here too, the ensemble playing of the continuo department was spot-on.

Nagy rejoined her colleagues for Louis-Nicolas Clérambault’s Trio Sonata La Magnifique. During the charming dance movements — Sarabande and Gigue — the fierce fugue, and the closing adagio, the players achieved the perfect unification of the French and Italian styles, bringing the concert to a fitting conclusion.

END_OF_DOCUMENT_TOKEN_TO_BE_REPLACED

Rodgers & Hammerstein’s Cinderella was originally produced for television in 1957 — seven years after the animated Disney film was released — and starred Julie Andrews. According to the Rodgers & Hammerstein website, it was viewed by over 100 million people. END_OF_DOCUMENT_TOKEN_TO_BE_REPLACED

The story line has its origin in an 1855 play and an 1842 farce that Thornton Wilder mined for his 1938 play The Merchant of Yonkers. When that turned out to be a flop, in 1954 Wilder made the crucial decision to re-center the show around the character of the legendary marriage broker Dolly Gallagher Levi and renamed it The Matchmaker. END_OF_DOCUMENT_TOKEN_TO_BE_REPLACED

The Dodero Center for the Performing Arts at the Gilmore Academy in Gates Mills is one feature of an impressive campus. The auditorium is shallow, the stage is deep, and the ensemble played without a shell. Throughout the program, the sound, especially in instruments’ lower registers, tended to disappear. END_OF_DOCUMENT_TOKEN_TO_BE_REPLACED