What sets SalonEra apart from other online offerings is that it wasn’t conceived as a concert series — instead, it aims for a 50-50 blend of music and conversation. “Hearing from artists, getting that context, and creating personal connections with the artists and the music is a big part of what the series is about,” Nagy said. This season’s lineup will feature familiar faces from last year together with new collaborators, and episodes will be released twice a month starting next week through April 2022.

The first episode, “Bach and Beyond,” brings together SalonEra’s Artists in Residence with some special guests for inventive reimaginings of music by the Baroque maestro. Nagy called this group the “home team” — keyboardist Eric Milnes, viola da gambist Mélisande Corriveau, soprano Hannah De Priest, and violinist Shelby Yamin, SalonEra’s Associate Producer. The guest artist and new face on the program is tenor Philippe Gagné, who will record a new aria for a remote collaboration.

This exploration into Bach’s music will involve not only arrangements — turning violin sonatas into trios, and trios into solos — but also reconstructions of music Bach theoretically could have made. “We know that Bach wrote six Brandenburg concertos,” Nagy explained. “But what if there was another set of Brandenburgs using music by Bach — reimagining that and recasting it as ensemble concertos, for instance.” Some Bach-inspired heavy metal will be “a fun way to end the episode.”

Episode Two, “Performer-Composers,” will mark baritone Jonathan Woody’s return to the series — this time as a composer. Woody, harpsichordist Nicola Canzano, and Baroque bassist Doug Balliett will analyze their latest projects and share their viewpoints on writing music. Balliett will discuss his experience composing a full year’s worth of weekly cantatas, while Canzano will explore the 18th-century compositional practice of partimento.

Woody’s appearance in this September 27 episode is perfectly timed to cross over with Les Délices’ regular concert season, which premieres on October 7. The opening performance will feature his latest commission for the ensemble, By much love betray’d, which he will preview during SalonEra. 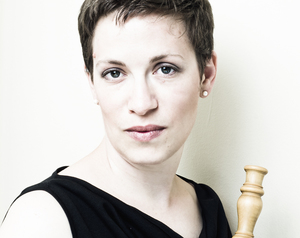 “It’s not that I’m uninvolved,” said Nagy (pictured), who serves as the series’ Executive Producer, “but the three guests who are on that episode are so passionate and deep into the subject, and they have really done a lot of work to conceive the arc of the program. It will not feel like other SalonEra episodes, and I think that’s a great thing.”

Three more episodes will bring the season to its halfway point at the end of the calendar year — “Divine Love,” a 17th-century program resembling last season’s “Stylus Fantasticus” (November 8); “Machaut Man,” a deep dive into the French composer and his works (November 29); and “Connoisseur’s Christmas,” a collection of early music for the holidays (December 13).

After the success of last season, Nagy, the production team, and everyone involved are ready to hit the ground running. “There’s an awful lot of variety, and I’m excited to work with some people that I’ve never worked with in person. There are a few people that we are working with literally across oceans, which I’m excited and inspired by.”

Continuing SalonEra after the disruptions of 2020 is a natural extension of the series, Nagy said. “From the beginning, I was always interested in creating work that would have a life and value after the pandemic.”

You can watch SalonEra on Les Délices’ Facebook and YouTube, or at salonera.org. Tickets are free, with a suggested donation of $10. A live Q&A takes place after the premiere, and the episodes will be available for 48 hours. Subscribers will get on-demand access to SalonEra’s first season.

The cimbalom was the feature of the show, an instrument capable of taking on many personas. Its performer, Chester Englander, has shaped his career around the instrument, and has inspired composers to write more repertoire for it, some of which was presented on the program. END_OF_DOCUMENT_TOKEN_TO_BE_REPLACED

You wouldn’t expect that acoustic from a glance at the nave, which is wide and long, but not especially lofty. But when I guest conducted a local amateur choir and professional orchestra in Beethoven’s Mass in C there a few years back, during the first rehearsal we released the final chord of the “Gloria” and listened in astonishment for the next several seconds. The sound continued to roll down the space like the big wave that surfers dream about. END_OF_DOCUMENT_TOKEN_TO_BE_REPLACED