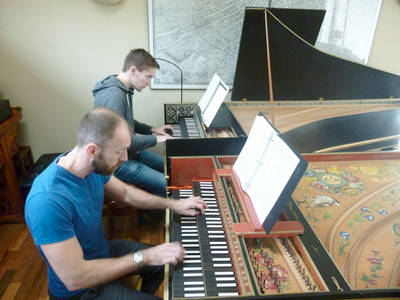 Recitals that feature duo-harpsichordists are rare enough treats, but the program of French baroque music that Michael Sponseller and Jacob Street played on Les Délices’ series at The Galleries at Cleveland State University on Saturday evening, January 16, was an extraordinary tasting menu of twenty opera-related delights. These ranged from the ancien cuisine music of Jean-Baptiste Lully and Marin Marais to the nouvelle cuisine experiments of Armand-Louis Couperin, sandwiched around ten wonderfully varied main courses by Jean-Philippe Rameau and followed by a pair of postprandial confections supplied by Pancrace Royer.

Playing an elegant pair of period instruments lent by Lisa Goode Crawford, Sponseller and Street crafted and executed an hour-long program as clever in its conception as it was thrilling in its execution. The instruments sounded full and colorful in the resounding acoustics of the high-ceilinged gallery.

“The Imaginary Orchestra” refers both to the harpsichord’s role in simulating an instrumental ensemble during opera rehearsals, and to its ability to replicate popular operatic excerpts in arrangements or reductions for aristocratic salons. The “Do Try This at Home” function of the instrument generated a lot of repertoire: some 500 keyboard arrangements of excerpts from Lully’s stage works exist, giving Sponseller and Street lots to choose from in their opening set. That included ouvertures, airs, and dances from Cadmus et Hermione, Atys, and Le Bourgeois gentilhomme, with two pieces from Marais’s Alcide tossed in for a bit of contrast.

Rameau, a latecomer to the Parisian musical scene at the age of 39, wasted no time in establishing his credentials as an opera and keyboard composer. Excerpts from his Pièces de Clavecin en concert, suites, and operas (Hippolyte et Aricie, Dardanus, Boréades, Platée, and Castor et Pollux) formed the plats principaux of Saturday’s program.

Rameau had a fine sense of humor (as he demonstrates in “La Pantomime” from the harpsichord pieces and the “Tambourin” from Platée); a strong taste for variety of timbres and registers (the low, dark layerings of “La Livi” versus the thin, wiry texture of the “Gavotte pour les heures” from Boreades); an appreciation for robust, peasant music (the “Tambourin” from Platée); and a fine ear for drama (the “Trio des Parques” from Hippolyte et Arcie, which represents the descent into Hell through torturous harmonies and chilling cascades that any avant-garde composer would admire). 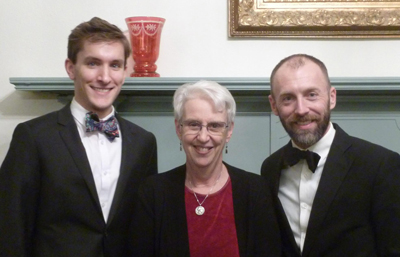 Moving ahead several decades to 1773, Sponseller and Street joined in a bravura performance of Armand-Louis Couperin’s Simphonie de deux Clavecins in D, a gallant work in three movements that pays homage to the post-baroque style and musical forms of the Mannheim School.

“Now for something a little less silly,” Sponseller said before the duo ended the program with two pieces by Pancrace Royer from Le Pouvoir de l’Amour. The second, “Les Craintes, Les Pleurs,” made a lovely, swooning conclusion to a program that never failed to sound fresh and inventive.

Duo piano programs are tricky enough, but when you’re playing instruments that pluck strings rather than strike them (which allows for various approaches to attack), getting everything to line up together is vastly more complicated. After the first set of Lully and Marais pieces, where they played tidily but a bit cautiously, Michael Sponseller and Jacob Street relaxed and had great virtuosic fun with the rest of the program, producing a remarkable spectrum of sounds and — in Rameau’s “Ritournelle Vive” from Dardanus — a breathtaking virtual crescendo and diminuendo. Not easy.

Called back for the third time by the enthusiastic audience, Sponseller and Street ended a memorable evening with a real “encore,” a repeat of Rameau’s “La Pantomime.”